COMMENTARY: Saved by the Bell 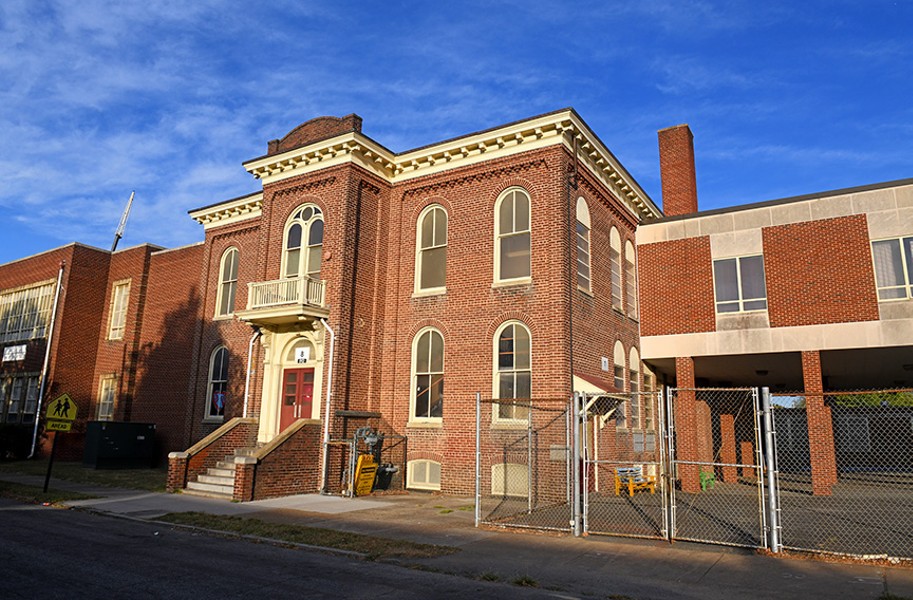 Scott Elmquist The central, Italianate structure of George Mason Elementary, at 813 N. 28th St. in Church Hill, was designed by renowned architect Charles M. Robinson in 1922. The Commission of Architectural Review has instructed the Richmond Public Schools to preserve the building.

Some folks again are scratching their heads over a disturbing cultural and racial disconnect here in Richmond.

On the one hand, many are basking in the reflected glow of newly named Arthur Ashe Boulevard and anticipating the arrival in December of artist Kehinde Wiley’s sculpture that features an assured black person on horseback.

Meanwhile and inexplicably, the Richmond School Board on Aug. 19 voted 7-1 to demolish an authentic and living piece of black history.

This is a 93-year-old Church Hill landmark. George Mason Elementary School is still welcoming students at 813 N. 28th St. Only Kenya Gibson, the board’s 3rd District representative, dissented: “It doesn’t make sense that we had a community that looked at the [Confederate] monuments for a year to decide whether or not to tear them down, then we decide to tear down a black school with no discussion at all.”

Not only is the architecturally handsome, Italianate core of George Mason one of the city’s oldest continually used public school buildings, but a much newer wing is named for former Sen. Henry Marsh, who lives nearby and was a transformative figure in Virginia history. He was a law partner of civil rights icon Oliver Hill in the firm of Hill, Tucker and Marsh and became the city’s first elected black mayor. More recently, he represented the capital city in the General Assembly.

On an adjacent lot a replacement George Mason is under construction. It is one of three schools being built with a combined tab of $146 million and being financed from the recently increased city meals tax. The trio should open in fall 2020.

The school superintendent, Jason Kamras, has called vigorously for the George Mason’s demolition: “I am not in favor in any way of keeping that structure,” the Richmond Times-Dispatch quoted him telling members of the team that oversees new school construction. Kamras is also quoted on the school system’s webpage: “We believe our children should come first. Every RPS student deserves beautiful outdoor space — athletic fields and courts, as well as modern playground spaces.”

So a question, Mr. Kamras: How does that reasoning square with the fact that Huguenot High School, which opened in 2014 and is the city’s newest high school with expansive space for sports, has one of the state’s highest dropout rates, 29.1 percent? Its 68% graduation rate is among the state’s lowest. If stalwart old buildings are so awful, why does Thomas Jefferson High, a 90-year-old school, designed by esteemed architect Charles M. Robinson, who also designed the oldest section of scorned George Mason, have a considerably better record with a 9.5% dropout rate and an 89.2% graduation rate?

So don’t demonize old schools. Few deny athletics and playtime are good things, but informed and reasonable leaders should embrace the considerable added value in balancing the restoration and repurposing of a sturdy, attractive and historic structure while still accommodating elementary level outdoor sports and recreation.

But there’s good news. On Sept. 24 the Richmond Commission for Architectural Review came to the rescue of George Mason. The task of this panel of volunteer experts is to guide public and private developers through the often sticky wicket of best practices in restoration, conservation and adaptive reuse. It denied the demolition request and instructed the school system to go back to the drawing board. The building is near the St. John’s Old and Historic District, and an important part of the mix. Restore and repurpose the old core of the school, sell it to another party or move the structure. But don’t tear it down: Sadly, that’s what the School Board had been instructed by CAR previously.

If Kamras and the six supportive board members really did believe that children came first in this matter, they would embrace the cultural and developmental aspects of education and experience being deeply enriched by living and learning in a neighborhood, with a mixture of not just familial generations, but important physical pieces and reminders of the past.

Installing a mere plaque to memorialize a demolished building, as the schools chief suggested, is an insult to the collective memory of a neighborhood, especially Church Hill, which treasures such touchstones. Such architectural and physical evidence tells children, in subtle but powerful ways, who they are, what got them here, and perhaps how the paths to learning, building and creating were obstructed for their elders. The city of Richmond has a reputation for fine architecture, including public school buildings that were built in the first third of the 20th century. Suburban counties can’t mine similar gold for inspiration. Like low-lying fruit, shiny contemporary buildings are tempting, but the sprawling new George Mason replacement building is merely a rip-off from a school initially designed for Suffolk. Speed and expediency on the part of the School Board, but not necessarily with an eye to cost-effectiveness, have plopped this generic building now under construction in Church Hill.

For 138 years, George Mason Elementary has been an anchor of Church Hill. For 60 of those years the surrounding neighborhood has been the focus of homeowners, the City of Richmond, private foundations, developers and renters who have systematically and thoughtfully restored and rebuilt the area. This once in a multigenerational opportunity and process of building a greatly needed new school should have sought an elementary school that contributed to the re-knitting and enhancement of the neighborhood. Maintaining existing and historic buildings is a powerful way our educators can teach children innumerable values — including environmental sustainability.

For over a century there’s been an African-American school on North 28th Street. George Mason’s beginnings were in 1881 when a four-room frame structure was constructed. Six years later a brick addition was made to the building in the Romanesque revival style. The current, red brick structure, that the commission ruling protects, was built in 1922. It was designed by Charles M. Robinson who designed many of our finest public schools that still provide yeoman service. These include Ginter Park Elementary, Patrick Henry Elementary, Albert H. Hill Middle School, Binford Middle School, Community High School (formerly Chandler Middle School), and Thomas Jefferson. Some other Robinson-designed schools have been repurposed. These include Highland Park Elementary for senior residences and East End Middle for school offices.

Ironically, as the School Board was attempting to condemn the old George Mason, across town the Virginia Museum of Architecture & Design in the Fan District was installing a major exhibition that celebrates the prolific career of the architect who designed the school: “Hiding in Plain Sight: the Architecture of Charles M. Robinson.” And at the intersection of Patterson and Libbie avenues the former Westhampton School is being repurposed.

Historic preservation and adaptive reuse are core Richmond values. And nowhere is this better exemplified than in the East End, from Rockett’s Landing to Tobacco Row, from Church Hill and North Church Hill to Union Hill. In another neighborhood, the Virginia Black History Museum and Cultural Center has converted an old armory into a sparkling new destination. The former St. Luke’s Building in Jackson Ward has been converted into apartments. The once taken-for-dead 1930s Maggie L. Walker High School has been transformed into a modern governor’s school on North Lombardy in Carver.

Architect Robinson, upon completion of Chandler Middle School, a 1920s building that now houses highly-ranked RPS Community High School, said it well as to why architecture and the humanities are central to what a child sees and experiences:

“I hope someday to see a group of statues over the front entrance… on a pedestal provided, or a suggestion of the possibilities of the arts in education.”