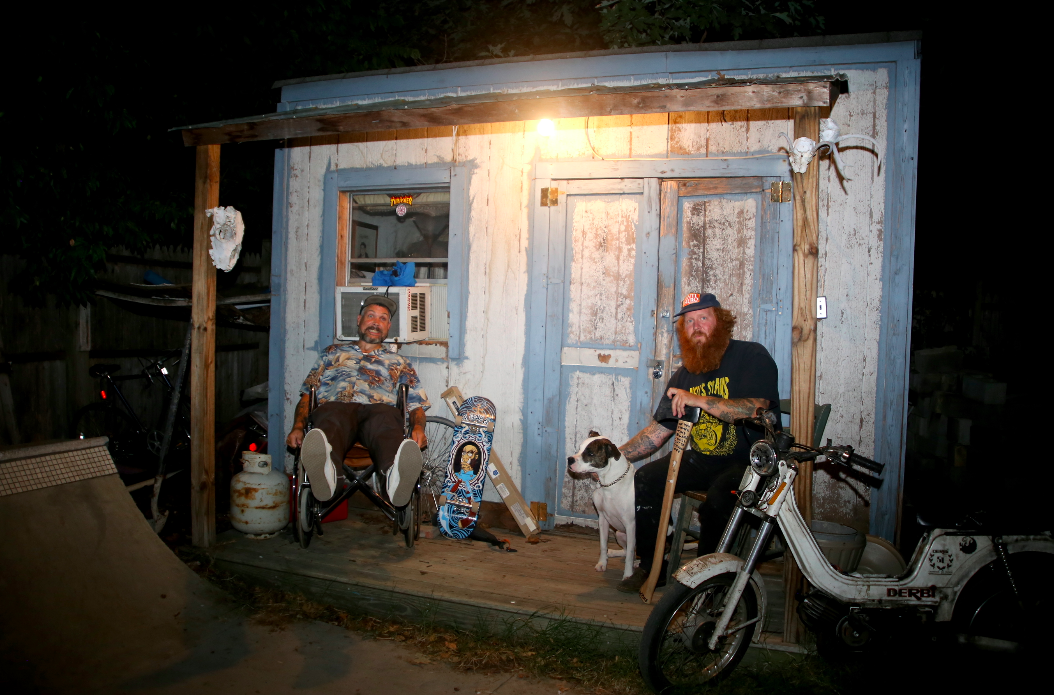 For longtime Richmonders Pat Lowery and Travis Pulley, Monday night is a kind of culmination of a scummy life few manage to achieve.

When "Hells Satans" premieres Monday at 11 p.m. on the Fusion network, it’ll be a unique glimpse into the lives of a group of OG Richmond folks who live life their way. Focused mainly on a moped gang, the titular Hells Satans, the eight-episode run offers a produced, but entertaining slice of Richmond-style reality TV.

Pulley and Lowery met in the '90s and first linked up over parties and skateboarding, but it wasn't until 2003 when Pulley rolled up with his first moped that the Hells Satans formed.

“When we were kids, you drove around and looked for skate and swim spots; we do the same things with mopeds,” says Lowery. "We ride a little bit outside the city and see an access road and go down and see what we can find.”

Mopeds also appear to be the perfect vehicle for this kind of hunt -- motorcycles move too fast and traditional bicycles don’t handle the rocky terrain. It also didn’t hurt that mopeds were easy to maintain and cost about $100 from a scrap yard back then.

So off they’d trek into the wild blue yonder and come back with tales of new skate and swim spots like Dogshit Bridge, Concrete Beach, the Tugboat Spot, and Shit Lake.

“All these weird spots that no one else knows about and you’re really only going to find on a moped,” Lowery says.

Fast forward a bit and the Hells Satans get approached by a producer from "MTV True Life," Carlos Puga. He offers to shoot a kind of mockumentary about the club and the narrative they weaved is available online and an interesting watch.

Check it out in all its batshit-crazy glory below:

Satan Since 2003 from carlos puga on Vimeo.

The mockumentary never made it on TV, but they shopped it at festivals for a bit before a long silence pushed the project on the back-burner. Then Puga reached out with a new idea: turning the life and times of some scummy Richmond moped-dudes into a show, this time a bit more realistic, with less gang wars and more of a reality-TV spin.

Sure enough, over two years after filming wrapped, the eight-episode season includes the drama and romance many reality shows aim for but with a Richmond bend.

“The bars we hang out at, the restaurants we go to,” says Lowery of what viewers can hope to recognize this Monday. "We go to Taboo, Fan Guitar and Ukulele. There’s river stuff, skate and moped spots, a scene at Shafer court.”

Lowery admits that the time lapse between filming and today leaves some production details a bit murky and he’s not really sure what the final product is going to look like. He likes what he’s seen so far, but in the end he knows reality TV often is in the hands of the show’s producers, not the stars.

“No matter how real or fake something is, editors are making it up in between,” he adds.

In a press release that describes the show as a look inside a "notorious moped gang ... who keep boredom at bay with elaborate pranks, stunts and heavy drinking,” Cineflix Rights CEO Chris Bonney says the show has what the network is looking for: "great, inside access to countercultures with a mix of eye-opening antics and emotional revelations that will prove popular with younger viewers in particular, as they’ve already been with Fusion’s millennial audience.”

Your first chance to catch "Hells Satans" happens Monday, July 24 on Fusion Network at 11 p.m. and 11:30 p.m.. A viewing party is set for Continental Divide (on Main) starting at 9 p.m.