Coming of Age: The Real Millennial Crisis is Poverty and Homelessness 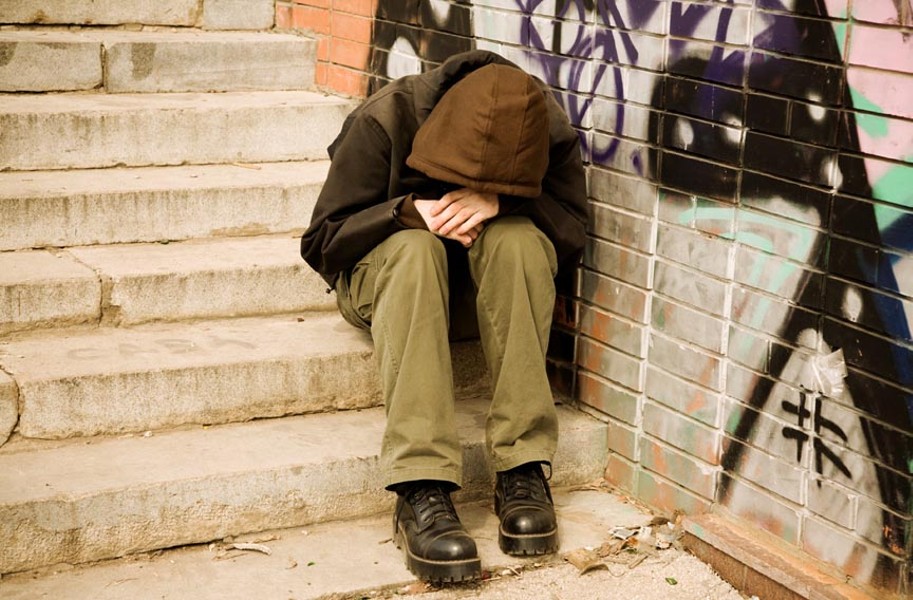 When I say the word millennial, what image springs to mind? Perhaps some golden child of suburbia, in a pair of flip-flops, with parent-purchased Audi SUV and iPhone, blissed out in text-zombie land.

Certainly you aren’t picturing a 20-something living under a bridge.

Before we peer under that bridge, consider how tricky generational labels can be. I remember the hippies and Vietnam, yet I score 81 of 100 on the Pew Research Center’s quiz, How Millennial Are You? Perhaps my high score comes from my easily bored nature, my lack of a cable television plan or a land line for my phone, and my preference for sriracha sauce over ketchup.

Generationally, when I came of age I never got to enjoy the wild sex, good drugs or muscle cars of the counterculture era. I was stuck in the days of Chevy Vegas, the AIDS awakening and “Just say no.” I should be an X-er.

I have a job with benefits, however, and no debt. So that makes me decidedly not millennial. But if we consider expectations for wealth and property, we can begin to explore which young people might be living beneath an overpass or, at best, on a friend’s sofa. Among those who read so-called journals of ideas, fretting about millennials has become a parlor game of sorts. We wring our hands and type millions of words debating whether helicopter parents are wrecking their children’s imaginations by over-structuring their lives. We shake our heads when we hear young people referred to as teacups or crumblies who flock to campus psychological services at the first sign of a B- or a discouraging word from a peer. We look sidelong at fraternity houses and consider whether they need 6-foot-high warning labels. We call each other awful names over the use of trigger warnings in literature classes that include any works with traumas sexual, physical, even dietary.

After all, we must protect our children.

In these ultimately futile discussions I rarely encounter any mention of helping those millennials who never enrolled in college. Do not look for that debate in the scream-fests of the 2016 election or online commentary in the Atlantic magazine. I never hear much about kids whose parents are not taking the treasured children to one sporting event, tutoring class or extracurricular after another, all to groom them for getting into the best college possible.

Just once in a while, I find references to young people living in old motel rooms along the U.S. routes, with a dozen or more family members crammed into a living space designed for a tourist couple who arrived in a 1957 Studebaker. Most certainly there’s little mention, aside from a reference to the crushing student loans that many millennials carry, about those who left college early to serve me a bear claw and coffee at one of Richmond’s hipster doughnut shops.

One in five millennials lives in poverty, as a 2014 Census Bureau study revealed. Granted, they’re young. I was young and so poor once that I sold blood plasma to pay bills, but that was called graduate school. A diet of ramen noodles and cheap beer, punctuated by abuse from a lab tech who probably worked for Ferdinand Marcos, were fine. I knew my final destination was a doctorate and no debt.

I do not think my millennial successors can claim that, let alone if they never finish college. The same report from the Census Bureau found that just 22 percent hold college degrees. What, exactly, can the others do? There aren’t too many factories around here paying United Auto Workers wages. I can pay them $10 an hour to help me pick veggies on my little farm, which would be a disaster for me because I would lose money bringing produce to my few customers.

But even if I wrote off that loss, it would hardly help the millennial farmhand: $400 a week does not a house, car and insurance policy make in our current meritocracy. Those who move money around and make millions or billions from that movement are our elite, not those pouring coffee or picking lettuce. The gap between — far bigger than when I entered college — looks unbridgeable.

One can find hard data on millennials living with parents, but it’s more difficult to get reliable numbers of millennials who have no homes at all to live in. They crash in shelters or take to the rails where demographers rarely venture. Along Broad Street between Malvern and the Boulevard, I often see kids with rail-yard-soiled clothes. Instead of a bindle stick, they carry backpacks. Maybe they keep harmonicas and cans of beans in there, but I don’t think today’s train hoppers have it any better than did the hobos of the Depression. For one, there’s no FDR make-work program or looming war to ramp up manufacturing again.

Given the facts on the streets, in the doughnut shops, in rundown motels or under bridges, we need to diversify our ethnocentric stereotype of the biggest generation in U.S. history. Understanding them and uplifting as many as possible is critical. They will be saddled with the mortal sins of their elders: inaction on the federal debt, the destruction of America’s middle class, the venality of the banking elite, escalating human-caused climate change, and a preventable disaster in Iraq that spawned the medieval savagery of the Islamic State.

We expect millennials to solve these crises, don’t we, while paying for our Social Security and Medicare? Good luck with that. Putting a little more in the tip jar at Starbucks is only a start. If we don’t do something soon to lift all these post-boomer boats, future generations will be unable to save us, perhaps because the millennials will end up as cynical as X-ers and as broke as hobos. S

Joe Essid teaches writing to millennials at the University of Richmond.