During a time where discomfort is the norm, these restaurants offer solace. 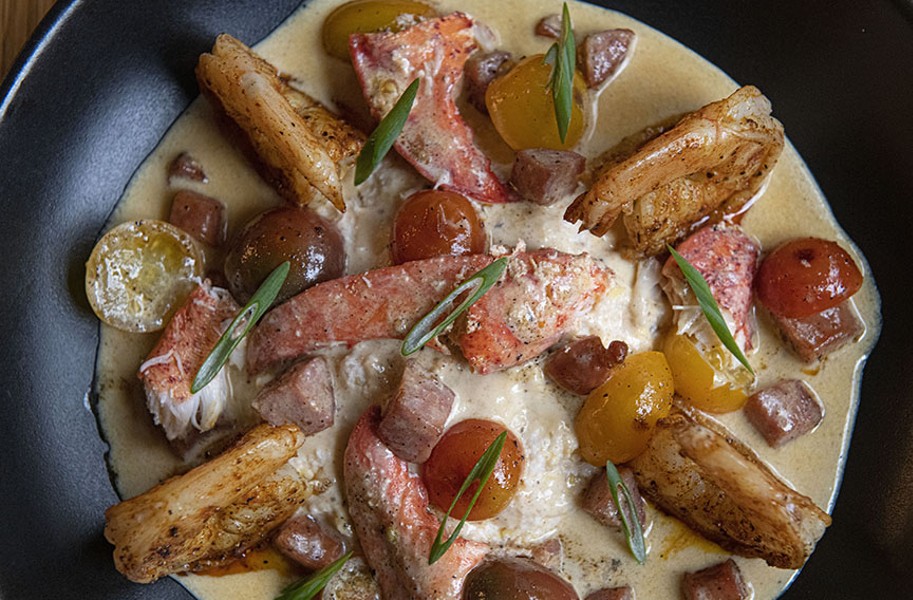 No, these are not the ramblings of a very hungry writer – these are but a smattering of the decadent items found on the menu of Brittanny Anderson’s newest restaurant, Black Lodge.

The all-day, to-go only cafe opened Jan. 8 and is currently serving coffee, cocktails, breakfast, lunch and dinner out of the old Chairlift space, also an Anderson spot.

While it is not in fact the extra-dimensional space featured in ’90s mystery “Twin Peaks,” the cafe still feels a bit out-of-this-world, a sacred spot devoted to creating strictly delicious food, the kind you want to curl up with in bed, when no one else is around.

It’s the start of a new year with resolutions to do better and be better manifesting not as juice cleanses and low-carb diets but instead as hearty, flavorful meals that fill you up body and soul. In spite of the mandatory 6 feet required between all humans at all times, chefs around town are still able to curate these intimate dining experiences.

“The first two weeks of January have been back-to-back our busiest weeks,” says Mike Lindsey, chef and owner of the recently opened Lillie Pearl. “It’s been crazy.”

January is historically a terrible month for restaurants. It’s cold, people are broke from the holidays and half-hearted resolutions mean no happy hours for 31 days. But diners are flocking to Lindsey’s New American and Southern restaurant, ordering fried pimento cheese and short rib egg rolls and coffee rubbed filet medallions.

“I think the biggest thing is that we’ve been able to really put attention to detail,” Lindsey says. Before opening Lillie Pearl, he and wife Kim were a power team at Eat Restaurant Partners, helping open various new restaurants over the past five years.

“This was eye opening for me,” Lindsey says. “You know the last five restaurants we opened it was balls-to-the-wall and sometimes you don’t always do your best job. Here we started off nice and slow.”

Lindsey says that if and when dining rooms are allowed to operate at full capacity, he probably won’t fill empty spaces with booths and tables. “It’s so nice we get to talk to every table and now our guests are not just first timers – they’re first timers with expectations.”

Lillie Pearl has received rave – highly detailed – reviews on popular Facebook page RVA Dine & Drink, the kind of reviews that carry far more weight with Lindsey than anonymous Yelp stars, although it’s receiving plenty of fives there, too. Customers comment on the music, the service, even the way front of house pro Kim greeted them when they walked in from the cold.

“The other night there was a guy from D.C., he was the only person in here at 5:30 p.m. and he asked to speak with me,” Lindsey says. Not knowing what awaited him, Lindsey left the kitchen and headed to the dining room to speak with this sojourner.

“The guy looked at me and said ‘I know it’s a chicken sandwich, but damn. It made me feel so good. I had a bad day and I’m telling you I’m not even thinking about what’s happening after that sandwich.’”

To create a place – during a time when people are afraid to even leave the house – where customers are able to seek and receive comfort is no small feat. Lindsey and his crew are hustling six days a week for lunch, dinner and Sunday brunch, soothing pandemic weary diners with comfort food that transports them to a simpler, softer time.

Like Anderson with her muffuletta and Lindsey with his Smashville fried chicken sandwich, Liz Clifford and Jon Martin understand the power held between two slices of bread. The two started operating their new venture, Fat Kid Sandwiches, out of Hatch Kitchen this summer and they’re currently the lunchtime restaurant in residence at Hatch Cafe.

Partners in life and business, they’ve worked in restaurants from Chicago to Washington to Richmond – including esteemed spots like Moto, Colvin Run Tavern, Pasture, and Comfort – for 20 years. “We can make really fancy food,” Clifford says. “But what we want to eat is sandwiches.”

Fat Kid Sandwiches are not your standard ham and cheese subs. These over-the-top creations are literally stuffed to the bread brim with things as varied as fried mozzarella sticks and Buffalo wings. “It can be hard to edit,” says Clifford, laughing. “I want to put more and more stuff and it’s like, ‘OK at what point do I stop? Is this making it more delicious? Can we fit another mozz stick on there?’”

Clifford spent a year cooking in Italy and Martin has worked in Michelin-starred restaurants. But their greatest accomplishments to date may be their nostalgia inducing homemade pudding cups and Cap’n Crunch cereal bars.

“Something we noticed the day after something bad happened politically is we would just get slammed,” Clifford says. “The day after the election was one of our busiest days. You know if we can give somebody comfort with Cap’n Crunch or a chicken parm – at least we can do something. And we’re happy to do it.”