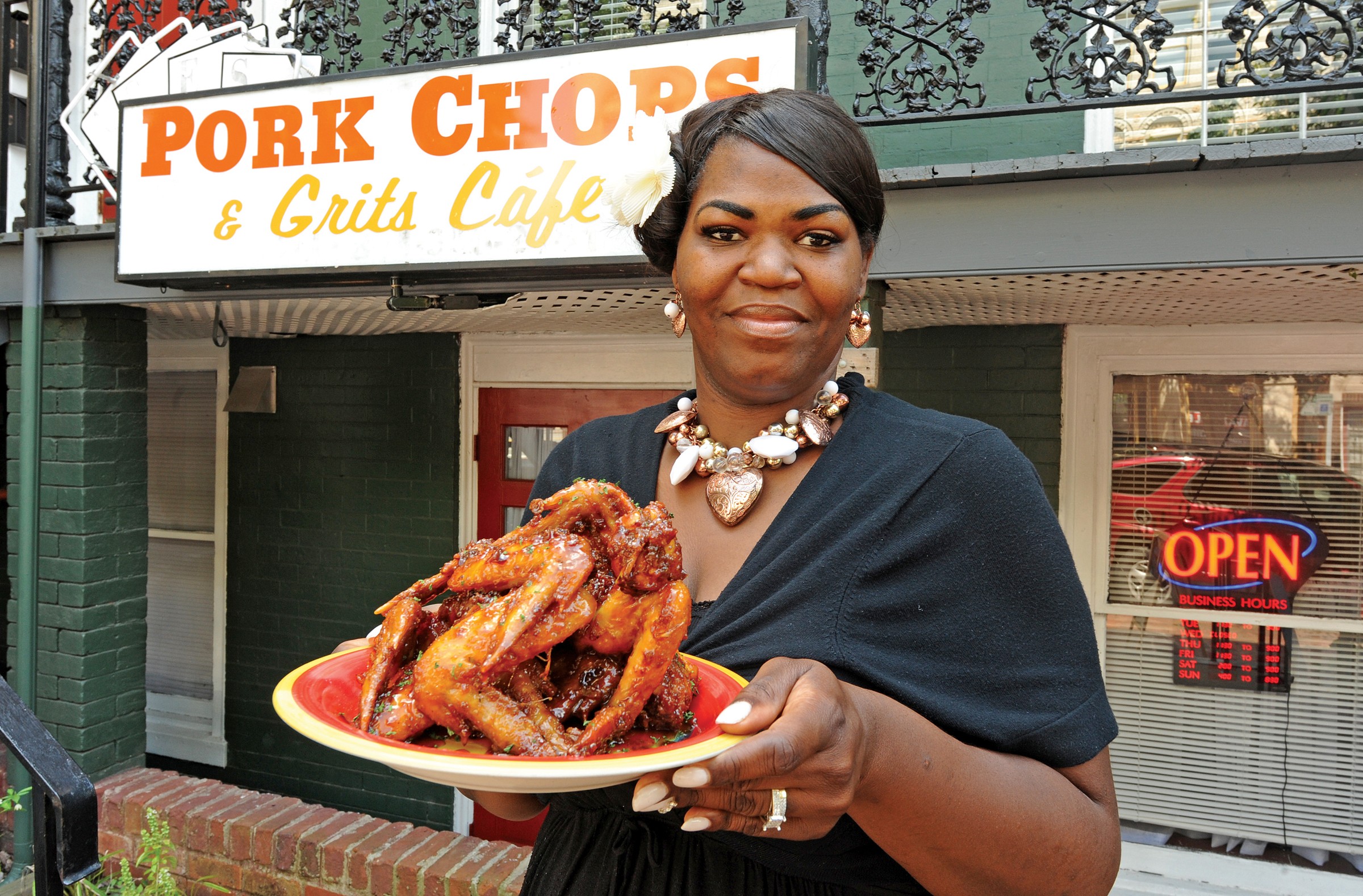 Editor’s Note: Johnson’s Southern Comfort is no longer open for business. “It closed was about a week ago,” says building owner Dillard Tupponce. “They found out they couldn’t make it. But stay tuned, he says. Another restaurant is moving into building at 2306 Jefferson Ave. soon.

Southern food has been enjoying a hip renaissance in Richmond, even if at times it feels like we’re drowning in a sea of sweet tea, pimento cheese and pork belly. One tradition as Southern as these regional comestibles is the Sunday supper, an informal meal that’s neither lunch nor dinner and all but unheard of in other parts of the country. Leisurely and usually family oriented, it’s an anachronism for most 21st-century denizens, a time sucker that few people have the inclination to bother with, much less cook.

Locally, a couple of neighborhood restaurants supply the kind of traditional spreads that once were the domain of Southern grandmothers. But don’t go looking for Sunday supper fashionably late — if you wait till 8 or 8:30, these places will be closed up tight. And if, like me, you prefer your tea unsweetened, you’ll be in the minority.

With the radio set to gospel music, Johnson’s Southern Comfort in Church Hill welcomes Sunday guests starting at noon, and on some Sundays offers a buffet ($12.99 adults, $8.99 children 12 and younger). It isn’t available on either of the two Sundays I visit, so it’s wise to call ahead if you have your heart set on it, but the regular menu contains all the buffet items, albeit not in unlimited portions. Entrees come with a choice of two sides plus obscenely moist and sweet corn bread, meaning you’re going to have a lot of food on your plate and may want to pace yourself.

The meatloaf dinner ($10.99 plus $1 for gravy) is two huge, thick slices with enough flavor to suggest an interesting mix of meats, although a question to the kitchen results in being told that the ingredients are secret. Whatever the secret is, the meatloaf’s delicious. The fish dinner offers a choice of whiting or lake trout, and I choose the latter, finding the two good-sized pieces a tad overcooked and dry, but not so much so that a slathering of tartar sauce doesn’t take care of it. With chicken and waffle ($11.99) comes a choice of flavors — plain, cinnamon, blueberry — but it’s window dressing, and the plain waffle with syrup is the ideal counterpart to the extremely crispy fried chicken.

The sides are standouts. Collards ($1.99) are cooked with smoked turkey and available only Thursday through Sunday, which might lead you to expect greens past their prime come the weekend. Instead, these taste as if they were just pulled from the garden — and not overly seasoned, as often is the case. A dish of cabbage ($1.99) is awash in a sea of butter, so decadent it could make a cabbage lover out of an 8-year-old. Baked macaroni and cheese ($2.99) is creamy without the crusty bits you might expect of baked mac. Fair warning: Candied yams ($2.50) are sweet enough to be dessert, so leave them for last or you’ll fill up quickly.

Over in Jackson Ward, Pork Chops & Grits Cafe starts serving Sunday supper at 4 and has a smaller dining room than Johnson’s, but just as much willingness to put tables together for large parties. And large groups abound here, where strangers talk to each other from different tables, and where you may find yourself as delighted as I was when a table of 10 begins singing along with the music, their voices as impressive as any gospel choir.

Because my Richmond grandmother always insisted that fried chicken ($10.99) was the quintessential Sunday supper food, I order it here too, finding it moister and slightly greasier than Johnson’s, although not in a bad way — just in that way that makes licking your fingers a pleasure. Even better, once we finish, our server arrives with warm, wet towels to remove the remaining sheen. The smothered pork chops ($12.99) come highly recommended by our server and she’s right, not only about the well-seasoned gravy and tender meat, but also how that one chop is going home in a box with me.

Sides are included in the meal price. When I see that stuffing is available only on Sundays, I can’t resist, although it has a slightly processed taste. Cabbage is nicely spiced, and fried corn is all butter. Grits come with a choice of cheese (50 cents extra), butter or gravy and are perfectly cooked, as you’d expect of a place with grits in its name. The dinner rolls that start the meal aren’t made in-house, although our server says they “add the Pork Chops touch,” which seems to mean being brushed with melted margarine.

When I comment to my companion on spying red velvet cake ($4) on the menu, our server overhears, calling from two tables away, “Yeah, and today it’s three layers!” When I ask why, she says the chef, who also does the baking (his wife does all the sides), just felt like it. I ask for it to go and the enormous slice arrives, taking up the better part of a large Styrofoam container from which we immediately eat it, unable to resist the moist crumb and subtly sweet frosting.

Sunday supper isn’t for the faint of heart or stomach. Portions are large and entrees are traditional, not trendy. Your best bet is to set aside some time and enjoy your supper at a proper Southern pace.