When it's worth giving someplace a second look. 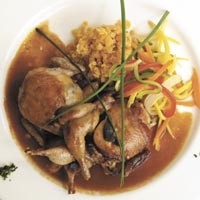 Chef Carlos Silva is easy to spot. It's not because he wears a chef's coat emblazoned with his name in 3-inch letters followed by the title “Owner/Chef” and Brazilian flag epaulettes — as far as I've seen he prefers working in shirt sleeves. No, despite his resemblance to a Latin Eric Ripert, with his dark complexion and silver curls, there's nothing flashy about the man at all, except a quick smile and a sharp Portuguese accent audible across the dining room of Bistro 27.

Silva is easy to spot because he's right where he should be: running the show from the middle of the line in his open kitchen, expediting orders, burning his fingertips on a batch of foccacia fresh from the oven, slicing mushrooms while the lamb chops sear on the stove behind him, turning them nonchalantly not a moment too late or too soon. At Bistro 27 — the same gorgeous Broad Street space that was once the disappointing 27 — the wine is on the table. The bread is in the basket. The chef is in the kitchen and all is right with the world.

When was the last time you went somewhere and found everything on the menu so appealing that on the waitress's third swing past you couldn't decide? Bistro 27's menu features the Italian craft that Silva honed at La Grotta and blends in some French notes as well as a bit of Virginia flair, all of which sound familiar enough.

A key difference, the one that makes ordering such a tough decision, is that unlike the previous incarnation of this joint, the level of execution is up to the promises made. There's even a stylish way to solve the dilemma of what to order — let Silva decide.

The chef's choice is available nightly in four-, five- and six-course options ($30-$35-$40) and is a steal. You'll want to come hungry as these are not the so-called tasting portions you sometimes find in prix fixe offerings — they are nearly full orders with a graceful lack of starch. Though the bread basket is baked fresh daily and comes with sun-dried tomato oil, don't fall for it; you'll have some serious work to do if you opt, as we did, to sample all six courses.

From the first plate, a splendid carpaccio of beef with truffle oil and candied walnuts, to the desserts, a simple vanilla bean crA"me brA¯lAce with burnt sugar and custard in perfect proportions, and a Monte Rosa Italian cheesecake that was lighter and fresher in flavor than any of its New York cousins, we were thrilled by Silva's selections. In a city known for dependable, predictable new American cuisine (think: every other restaurant on Main Street) Bistro 27 offers the refreshment of dinner as theater. Curiosity whet our palates and every course exceeded expectations.

After hand-rolled ravioli filled with roasted chicken, fontina and herbs, the parade of entrees began. A beautifully crisp, basted salmon arrived topped with shrimp so tenderly sautAced they literally melted on the tongue. Paired with braised escarole and mushrooms, the layering of textures and flavors presented a complexity that's difficult to achieve while maintaining focus, a masterful dish that used every element on the plate.

On a follow-up visit I confirmed that the simpler offerings of the lunch menu are treated with the same care, all the way down to the $8 half-pound burger with all the fixings and fries. A number of inventive foccacia sandwiches from $7 to $9 and smaller versions of dinner entrees make this a good option for a flavorful lunch in a beautiful atmosphere without breaking the bank.

Wisely, Silva has opted to leave the physical space virtually unchanged, down to the signage, which doesn't yet include the word “Bistro.” I noted one distinct difference, however; what I saw as a major flaw in the original design has been neatly corrected. Three line cooks used to crowd the open kitchen while myriad servers vied for position in the tiny window. Now the system has a chef, his assistant and three servers. What makes this economy possible is that each performs entrances and exits with precision and balance that seems effortless. The room suddenly feels twice as big.

When I first visited Bistro 27 two years ago, I had my reservations. Now you'll need them. S