Come Fly with Me

Barksdale's "Boeing-Boeing" fails to take off. 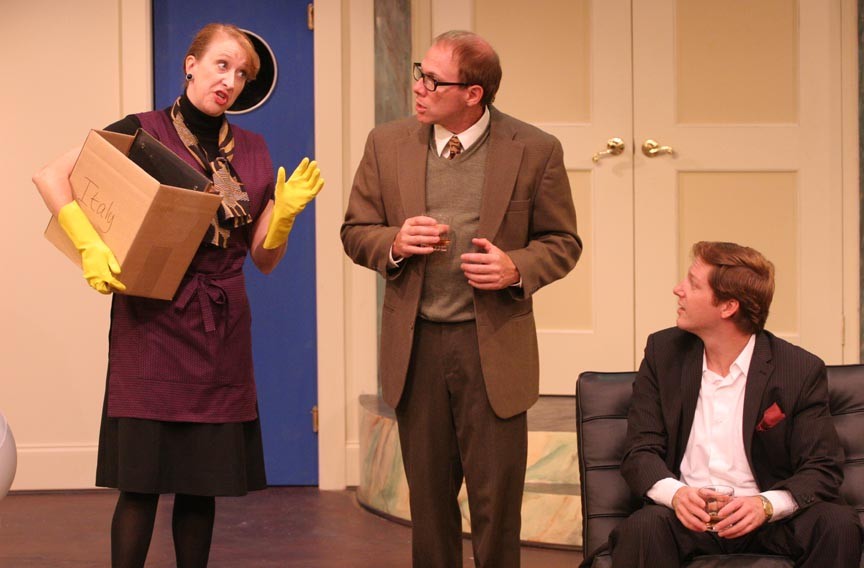 Bernard the architect has it all figured out. Simultaneously engaged to three stewardesses from three different airlines, he juggles his ladies by memorizing their timetables so they never meet. All goes according to plan until a massive storm causes the trio to spend the night at his place, where Bernard, his visiting nerd buddy, Robert, and his maid, Berthe, must keep the ladies from meeting.

"Boeing-Boeing," adapted by Beverley Cross from a French play by Marc Camoletti, is one of those zany '60s comedies in the same vein as "What's New Pussycat?" or the original "Casino Royale" — the theme song of which is played right before the start of the show.

Denis Riva plays Bernard, the straight man to Derek Phipps' loony Robert. Riva is fine, but Phipps' hysterics are exhausting to watch. Some of his antics include writhing on the ground because he's constipated and putting his head inside of a plant for no discernable reason. Susan Sanford is amusing as the cantankerous maid, but in the performance I saw she had some trouble with her lines.

Bruce Miller's direction has some amusing jokes, but it just as often jumps the shark, as with the kissing gags that go on for far too long. Marcia Miller Hailey's costumes fit the period perfectly, and the matching stewardesses' uniforms and flight bags drive home just how interchangeable these women are to Bernard. Terrie and David Powers' set design functions well as the pad of a womanizing jet-setter, right down to the Eileen Gray end table.

There's a great deal to take away from this old-fashioned comedy — not all of it good. The women are either crazy, cross or just after a man's wallet. Stewardesses are a promiscuous lot, and will throw themselves at any man with a pulse, especially if said stewardess is engaged. Oh, and a slap on the behind is considered a compliment by all females.

The rest of the audience seemed to find the slapstick and innuendo quite amusing, but this reviewer didn't get it. For my money, "Boeing-Boeing" is one of those '60s comedies that should have stayed in the '60s. S