The Richmond Ballet stacks the deck in the Big Apple. 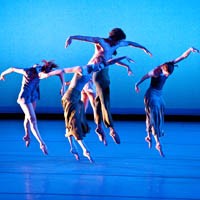 NEW YORK — Sitting in the audience at the Joyce Theater on April 9, a Manhattanite would be forgiven for thinking the deck is stacked with Richmonders. Home-team hoots and hollers throughout the two-hour performance culminate with an enthusiastic standing ovation. Apparently, close to 200 Richmonders made the trip north to cheer on the company — a testament to the ballet's strong support system. But despite a lukewarm review from The New York Times, this show's reception isn't necessarily because of the local bias. One dancer reports that the company receives partial or full standing ovations at each of its performances at the Joyce.

As it should. The ballet performs two programs in as many days. On Friday it presents a varied and exciting showcase that displays the diversity of the company. There is one classically rooted number choreographed by artistic director Stoner Winslett, followed by a modern piece by choreographer Jessica Lang set to minimalist music by Philip Glass and ending with an energetic number set to a medley of ethnic music (including that of throat singers from Siberia), choreographed by Brazilian Mauricio Wainrot. The dancers' versatility and execution are impressive. And the program shows off an exciting company that's trying to bring ballet into the 21st century, adept at both pirouettes and modern movements.

Lang's piece, in particular, is highly inventive. Dancers in simple white sports bras and shorts, or just shorts, interact with wooden pillars, sliding on them, carrying them and rearranging them. They create walls, bridges and burdens. Lang, a freelance choreographer who's created five works for Richmond Ballet, calls it half-ballet and half-modern. “When I work with ballet companies my pieces are always the most modern, and vice versa,” she says afterward.

After the ovation, the crowd takes to the windy New York streets, walking to the nearby Meatpacking District's Hotel Gansevoort, where the ballet holds a gala for supporters in a suite of private rooms on the hotel's rooftop. The choice is a bit odd, as the neighboring rooftop bar overflows with characters who could have walked off the set of MTV's “Jersey Shore,” but guests such as the Virginia Museum of Fine Arts' director, Alex Nyerges, Virginia first lady Maureen McDonnell and interior designer Todd Yoggy don't seem bothered. Two large security guards at the gala entrance keep out any unwanted riffraff.

Inside, grateful dancers mingle with board members and other Richmond supporters — and in some cases their children living in New York — enjoying the open bar and buffet dinner. The view of the city skyline and Hudson River is breathtaking. A disc jockey in the corner spins Michael Jackson and other pop tunes but, unsurprisingly, a dance floor never erupts. The ballet's managing director, Keith Martin, whisks around McDonnell, who must have been quite taken: On Monday the ballet announces that she is a new trustee.