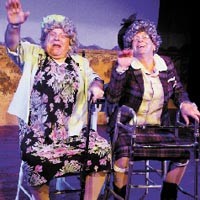 Christmas has a strange ability to accentuate a person's dysfunctional tendencies. What's even stranger is that we love watching the chaos play itself out (especially when it's not happening to us). This at least offers some explanation as to why we keep coming back to movies like “National Lampoon's Christmas Vacation” and “A Christmas Story.” Looking to add its offbeat stage performance to this comedic tradition is “A Tuna Christmas,” a Christmastime sequel to “Greater Tuna.” With actors John Hagadorn and Richard Koch assuming the roles of more than a dozen characters each, the production looks at the inhabitants of the third smallest town in Texas as its residents prepare for the holiday season. Performances at the Swift Creek Mill Theatre run through Jan. 10. $35. 17401 Jefferson Davis Highway. 748-5203.