The Richmond Mural Project gears up for another round of changing Richmond’s walls. 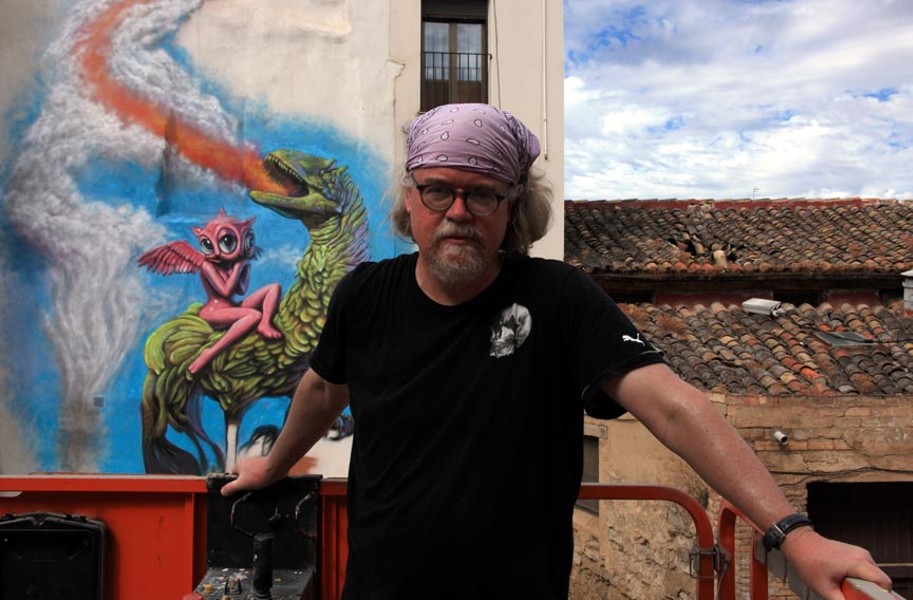 New York-based artist Ron English, known for his critiques of commercialism, is one of the better-known muralists coming to paint Richmond walls.

The woman leans back, lips parted, eyes shut in ecstasy. With her blue locks and red hair band, she resembles Snow White, albeit a nude one bathing in a jar of strawberry jam. Her nipples are covered with tape and her arms reach down deep into … the jam.

It isn't easy to forget the image of Etam Cru's mural, on the 1000 block of West Grace Street. If it weren't for the Richmond Mural Project, this mural and 47 others across the city wouldn't exist.

The effort enters its third year June 16, when a team of 10 artists from around the world will pick up their brushes to decorate Richmond's walls, creating at least 20 new murals.

"I'm ecstatic, because everybody gets it now," says Shane Pomajambo, executive director of Washington-based Art Whino. He and RVA Magazine's publisher, R. Anthony Harris, created the project as a spinoff of Pomajambo's G40 Art Summit. "It's just raised the bar, and so other superstars [of the mural scene] want to come."

One such superstar is Ron English, a New York-based painter known for his illegal murals and billboards that send up consumerist culture. English's work has become known as POPaganda with fast-food brands, Mickey Mouse and Marilyn Monroe appearing frequently.

Also on tap are three groundbreaking muralists from Poland — Chazme 718, Sepe and Robert "Tone" Proch. "They're from this whole school of up-and-coming muralists that are pushing the envelope with their technique," Pomajambo says. "They do more hypersurrealism, like the girl in the bottle."

The project is paid for with a combination of private, public and corporate funds. The City of Richmond, Altria Group and Venture Richmond have given money, with sponsors determining where the murals will be located.

In addition to beautifying the city, the effort aims to put Richmond in the spotlight for art.

"Richmond has great art, but it's not known for its art at a national level," Harris says. Since its start, the project has been publicized in The Washington Post, Juxtapoz magazine, Buzzfeed and real estate blog Movoto.

"This started the conversation of Richmond as an arts center outside of Richmond," Harris says.

The project hasn't been without its critics, including hometown muralists who have complained about being left out of the project — especially one called the Richmond Mural Project — and losing business to it.

Pomajambo has heard the criticism, but says that while Richmond has many artists, muralists are in short supply. He counters that local muralists have an outlet through the RVA Street Art Festival, which is organized by local artist Ed Trask and Councilman Jon Baliles.

Pomajambo says he's spoken with Trask about highlighting regional artists in the future, and was in touch with two Richmond muralists, but they had scheduling conflicts.

"We're definitely going to include them in upcoming mural projects," Pomajambo says. But visitors won't care which project the murals came from, he says: "When people come to town, they're looking for murals. They're not going to know which one is mine and which one is yours."

Another criticism leveled at the project is how few of its muralists are female — especially with Cru's nude jam woman gaining such notoriety.

"In the mural world, there aren't as many women as there are men, that's just a given," Pomajambo says, adding that muralist Natalia Rak participated last year. Of the 168 muralists he hopes to work with on various mural projects, about 10 or 15 of them are female.

Though Pomajambo has overseen mural projects in cities since — including Atlanta, Miami and Washington — he says Richmond is his centerpiece.

The godfather of Richmond's mural scene, artist Ed Trask, says they have different visions for their street art projects. He admits that the RMP — like the Richmond Folk Festival and Virginia Commonwealth University's Institute for Contemporary Art — are examples of external talent leading to great things around the city, and that external input forces Richmond to define itself.

"These international artists really make the local artists step up their game," says Trask via email. "But when you keep bringing these talented artists in — and quite often they are covering many walls — it starts pushing away space from some of the local artists." S

The muralists will begin June 16 and finish by June 27. Maps will be distributed by Gungho Guides. A reception will be held at 8 p.m., June 16, at Pig and Pearl, 2053 W. Broad St. It includes a performance by the DJ Williams Projekt. To attend, email RSVP@ArtWhino.com.