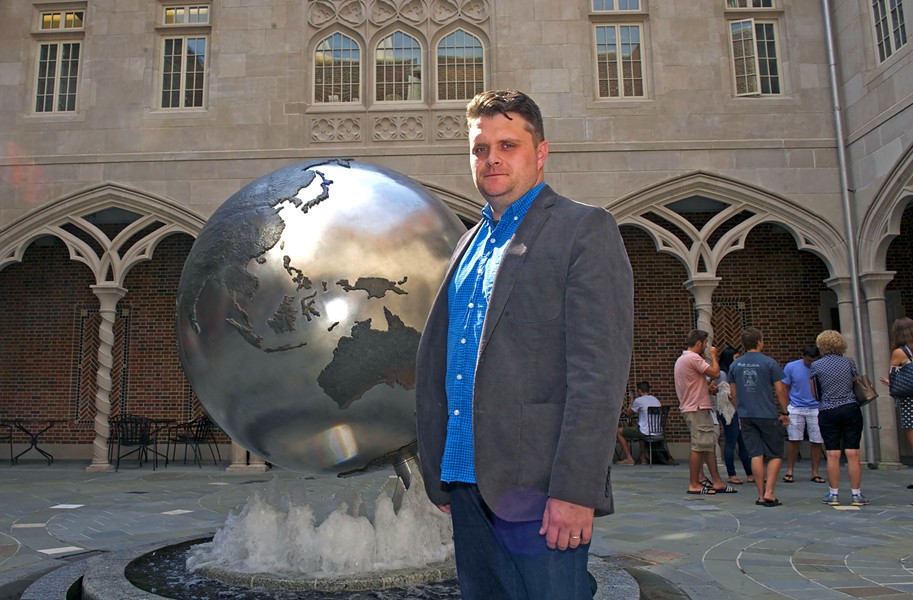 Scott Elmquist Timothy Barney, author of “Mapping the Cold War,” stands before the Weinstein International Center at the University of Richmond.

"Would the Soviet delegate to the San Francisco conference like to see a map of Russia?”

This phrase, said to Andrei Gromyko by the late U.S. Rep. O.K. Armstrong at a 1951 conference, provided one of the Cold War’s most humorous exchanges.

“I’d be delighted,” the Soviet statesman responded. Armstrong unfolded a map for Gromyko that depicted every slave labor camp in the Soviet Union, complete with photos of emaciated gulag children. A flustered Gromyko muttered, “No comment,” before passing the map to an aide who threw it to the floor.

This scene is one of many from Timothy Barney’s recent book, “Mapping the Cold War,” that illustrates the role that cartography played in the feud.

Perhaps more than any other conflict, the Cold War was a battle of ideas and ideologies, making maps an intriguing entry point into the struggle.

It’s because of this that the standard Mercator projection — the world map in most classrooms — becomes the enemy of more than one of Barney’s protagonists. Like many a Cold War tale, Barney begins his book with World War II, introducing readers to iconoclastic mapmaker Richard Edes Harrison.

Not a trained cartographer by any means, Harrison was an artist who became the mapmaker for popular magazines Time and Fortune during World War II. Bored with standard map projections and concerned with how they portrayed the world, Harrison helped revolutionize the form, creating maps with unconventional perspectives and placements, such as showing Europe from the East as though flying high above the Soviet Union.

S.W. Boggs — the State Department’s official geographer before, during and after World War II — made it his mission to remove as many Mercator maps from the halls of government as possible for fear of their influence on officials’ view of the world.

Created in 1569, the Mercator was popularized for seafaring purposes, and distorts countries near the poles to make them look bigger. Greenland looks equivalent in size to Africa on some Mercator projections, but Africa has nearly 14 times the land mass. Because it enlarges European countries and always shows them atop others, the map is said to reinforce ideas of colonialism.

“It was so good at depicting sea lanes that it also became a dominion of colonial power,” Barney says. “It became a map that was used for pretty nefarious purposes in a lot of ways by powerful men — usually white men — using this particular map and saying this is how the world is.”

Harrison once compared the difficulty of rendering a sphere on a flat surface as “trying to wrap a grapefruit without wrinkling the paper,” and the Mercator reminds us that even the most scientific-appearing maps are flawed.

“Every map is a distortion, every map is wrong,” Barney says. “There’s no map that can absolutely faithfully represent the world.”

World War II saw an explosion of maps created for ideological purposes, and cartographic propaganda would continue to be refined through the Cold War. As two forces tried to convince the rest of the world that their ways of thinking were correct, representing their ideas through maps became recognized as a method of persuasion.

One such example is the map “‘Gulag’-Slavery, Inc.,” in the Gromyko-Armstrong exchange. The map was created as a collaboration by the AFL-CIO and the United Nations and underwritten by the CIA and the State Department. Drawn by a Russian émigré, the map shows dozens of forced labor camps and offers a $1,000 reward to anyone who can prove it inaccurate.

As for present-day mapping, Barney says technological advances such as Google Earth have democratized cartography, but warns of their limitations. He mentions how the average person can now use Google Earth to locate North Korean labor camps at the click of a mouse.

“We’ve had an explosion of all the different types of themes a map can have,” Barney says, “but they’re using corporate technology to create that. We’re still at a point where we’re looking at the world through the lens of elites, and so Google is picking and being selective of what they should show us.”

As the variety and usage of maps continues to grow, Barney believes they’ll only become more ingrained in our culture as time marches on.

“On the surface, they tell us where we are and where to go,” he says, “but in a deeper sense … they locate us within these larger frameworks in the world.

“We’re more inside maps than we’ve ever been before.” S