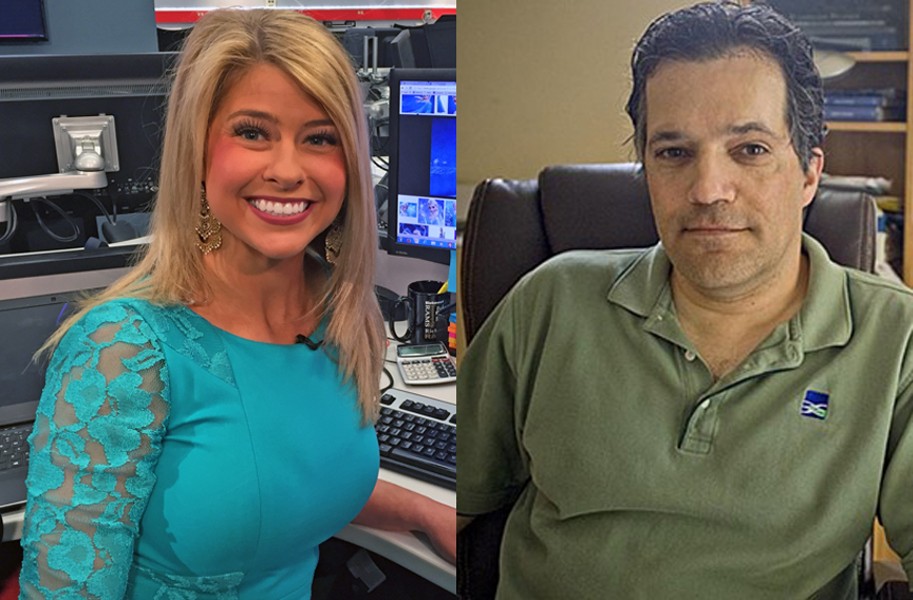 Nikki-Dee Ray and Dave Tolleris
UPDATE: Saturday, Jan. 7 -- Dave Tolleris responded to criticism on his Facebook page Saturday morning. "One of the things I forget from time to time is that a having such a huge following on Facebook / Social Media means that you have to be more careful with the words you use," he writes. "I apologize to [Nikki-Dee Ray] and others who do not take kindly to my comments."

On the eve of Richmond’s first winter storm of 2017, a snowball fight has broken out between local meteorologists.

“If you knew her background you would know that she is a complete airhead and the TV blondw [sic] bimbo personality,” Tolleris writes. “She is not a person of science and has no idea what they talking about [sic] and she has a terrible past.”

Tolleris’ comment came after he updated a forecast for Richmond, calling for 6 to 8 inches of snow. A commenter noted Ray’s on-air prediction of 3 to 6 inches.

“Everyone has their own methods and opinions, so variation is not uncommon,” Ray tells Style, saying she’s never met Tolleris. “It’s sad to see a grown man be such an online bully.”

The television meteorologist responded to several comments on Tolleris’ feed, explaining her science background and suggesting that commenters direct any questions to her.

Ray attended Auburn University and Mississippi State University where she graduated with a bachelor’s degree in atmospheric sciences. She previously worked as chief meteorologist in Lubbock, Texas.

Tolleris earned a degree in meteorology at the City College of New York, according to a profile in the Chesterfield Observer. He worked for the National Weather Service for six years before parting ways with the government.

Style contacted Tolleris for a comment and was iced out.

Ray posted a screenshot of Tolleris’ “bimbo” comment on her Facebook page with the comment: “Wxrisk.com obviously doesn’t pay any attention to my forecast. … Nor does he know anything about me. I am a meteorologist and a great forecaster. Bless him!”

As of this writing, that post had garnered 376 comments, most a-flurry with support for Ray.

“I usually don’t have time to worry about what other folks are doing,” Ray says, “but I felt like this needed to be addressed considering how rude and uncalled for it was.” 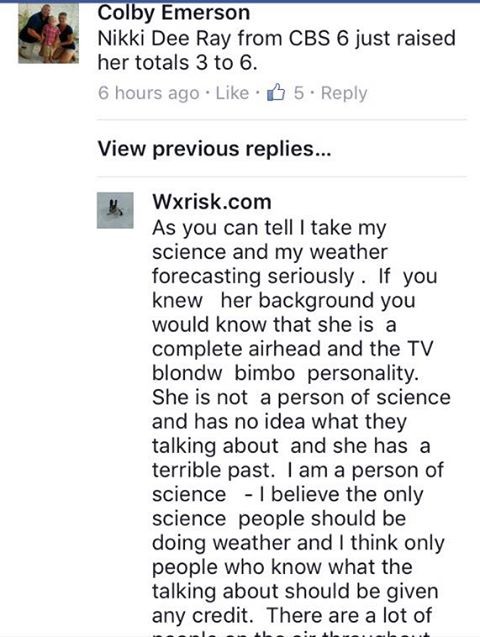 But the slippery debate over who is better at predicting weather rages on. At the heart of it are the different models of forecasting weather. Tolleris uses one called the new European model.

“btw a SURE sign that your TV Meteorologist has NO fooking [sic] clue is when he or she talking about is when they mention the RPM model,” Tolleris writes on his page. He’s referring to the rapid-precision mesoscale.

A blizzard of commenters also flooded Tolleris’ page, suggesting he keep personal commentary out of it. Some likened him to Donald Trump, and he responded with a photo of himself -- with Trump’s hair Photoshopped onto his head.

WxRisk.com is a private, subscription-based weather forecasting service that provides scientific forecasts up to 30 days out. Tolleris runs the site from his home in Chester.

One way to see whose prediction is more accurate: a ruler stuck in the ground on Saturday afternoon.