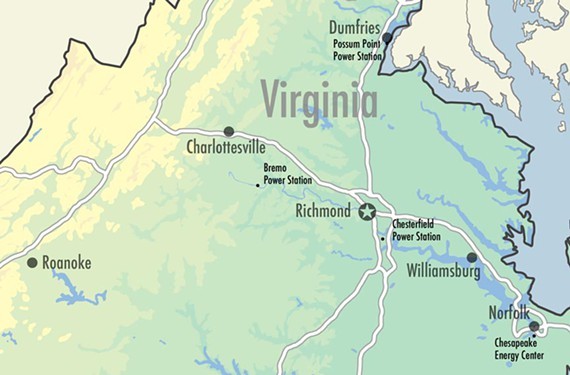 Dominion Virginia Power’s efforts to permanently seal its coal ash pits at four power stations has taken a new turn. The utility has applied for a permit to dispose of treated coal ash wastewater from its Chesterfield Power Station several miles southeast of Richmond on the James River.

Dominion’s successful efforts to get such permits at its Bremo Power Station, about 55 miles northwest of Richmond on the James River, and at its Possum Point facility, near Dumfries and the Potomac River, have been controversial.

As the Department of Environmental Quality recommended that the State Water Control Board grant Dominion a permit for Bremo, a wide range of environmental groups and community activists protested, saying that the utility would still discharge small levels of toxic metals and chemicals into the James.

The water board granted the permit in January. Later, Dominion and the James River Association entered into a legally binding agreement with Dominion that it would add more levels of treatment and enhance monitoring levels at Bremo before the treated wastewater is released into the James.

The James River Association has said in a press release that while it wants to make sure Dominion is dealing with coal ash in the safest way possible, that it appears that its application for the Chesterfield plant contains the same requirements as Bremo.

Dominion has tried to reach a similar deal regarding Possum Point but local green groups and the state of Maryland still oppose the permit.

The Chesterfield Power Station is the largest coal-fired facility the utility has. It is one of the state’s largest air polluters and is a leading source of carbon dioxide pollution.

The James River waters into which the treated coal ash wastewater would be released are at the brackish start of the estuary. They are near an area on the river where the toxic pesticide Kepone was dumped by a firm connect with now defunct Allied Chemical in the 1970s during one of the state’s worst environmental disasters. Note:This version corrects a statement that the Chesterfield plant is the No. 1 air polluter in the state. It is one of the top polluters, depending upon the data used.