How do local music venues rate when it comes to food? 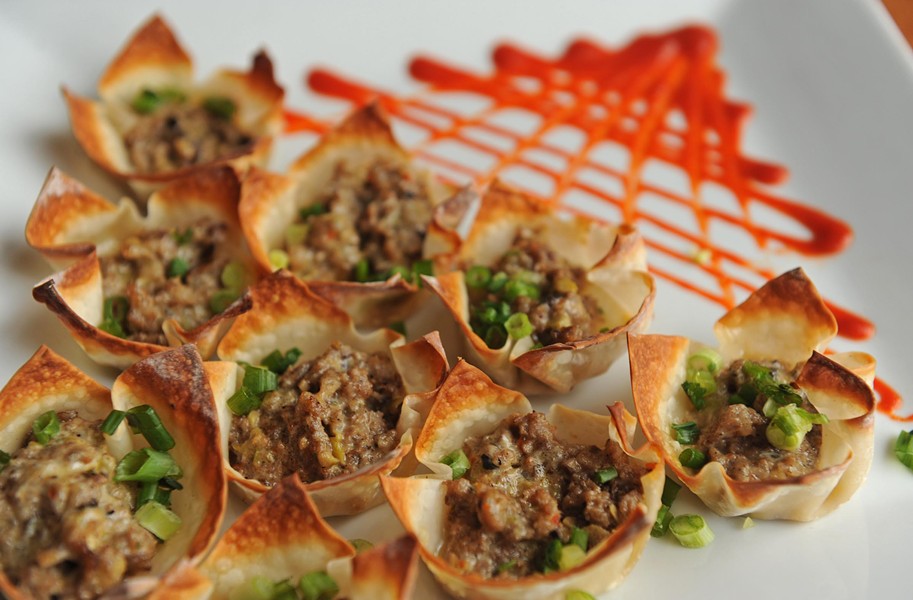 Scott Elmquist Sausage stars at the Camel are a spicy snack to accompany a beverage and a show at the West Broad Street performance venue.

Show me a person who doesn't think Richmond has a great music scene and I'll show you someone who doesn't go out much. But those who do make music part of their rotation know that even when time is an issue, it's easy to grab appetizers or a full meal where the music's playing. It's helpful to know what kind of an opening act the food might be.

As varied as sweet potato cheese fries and grilled flatiron steak, the Camel offers more than just bar food. The sign out front touts, "Try our famous sausage stars!" ($7.99) and that's a fine place to start. A savory mixture of sausage, olive tapenade and three cheeses fills wonton shells for a tasty accompaniment to a drink. The requisite nachos ($8.99) come with black beans and jalapeños (add beef or chicken, $2) topped with a Mexican cheese blend baked to a crispy mound generous enough for two. The spinach Sonoma salad ($7.99) is flavorful with apples, walnuts, dried cranberries and blue cheese in honey-mustard vinaigrette. A fat turkey and havarti panino ($8.99) arrives golden brown on thickly sliced bread and with a side salad of mesclun, carrots, cucumbers, tomatoes and blue cheese dressing, a satisfying meal before the band starts.

With the tag line "vegan friendly, carnivore approved," Strange Matter has a reputation for well-executed vegetarian food. A falafel pita ($6.75) gets jolts of flavor from the freshly fried falafel, vibrant red onion, spinach and basil vegan "mayo" on warm pita, and all thoughts of meat are forgotten. No one's going to rhapsodize over the cheeseburger ($8.75), but it does the job, especially paired with hand-cut fries. If you're trying to front load or play catch up at the end of a long night of drinking, the apology ($11) is a beast of ham, turkey, bacon and mayo between two lackluster grilled cheeses. But if you're actually a fan of that classic, the grilled cheese ($5.50) gets you any two-cheese combination and is far tastier. A side of lightly-seasoned roasted red pepper, zucchini and squash tastes so fresh it would be at home in a far fancier restaurant. Mac and cheese comes in a four-cheese variety, which could use a bit of seasoning, or in a vegan version.

Gibson's Grill at the National

Considering the size of the National, you'd expect plenty of food offerings. After all, the 9:30 Club in Washington, a comparably sized venue, has a menu with meat from local farms, bread from local bakeries and even local cupcakes. But at the National, you can get one thing: a slice of frozen pizza on a paper plate. At one time, it offered sandwiches and burgers made in the Gibson's kitchen next door, but staff had trouble keeping up on busy nights. Now it's pizza only and it's a poor excuse for bar food.

But on a recent nonshow night at Gibson's, I was impressed enough to get a second bowl of chunky tomato-basil soup livened up with red pepper flakes ($6.) A chicken-salad BLT on brioche ($8.50) was a tad mayo-heavy, but the abundance of bacon compensated. A simple order of nachos ($7.95), however, was a disaster. Advertised as blue corn chips, chopped tomatoes, roasted corn, black beans, jalapeños and queso, it turned out to be a scavenger hunt for beans and corn while there was so much processed cheese sauce drowning everything that 70 percent of the chips were inedibly soggy and the bottom third of the plate was a pool of coagulating remains. No thank you.

Is it possible to find interesting music in Richmond any night of the week? Absolutely, depending on your taste and openness to hear new sounds. Can you count on a meal just as satisfying as the music playing? That depends on how good the band is. S