Some locals say the key to living large is scaling down. 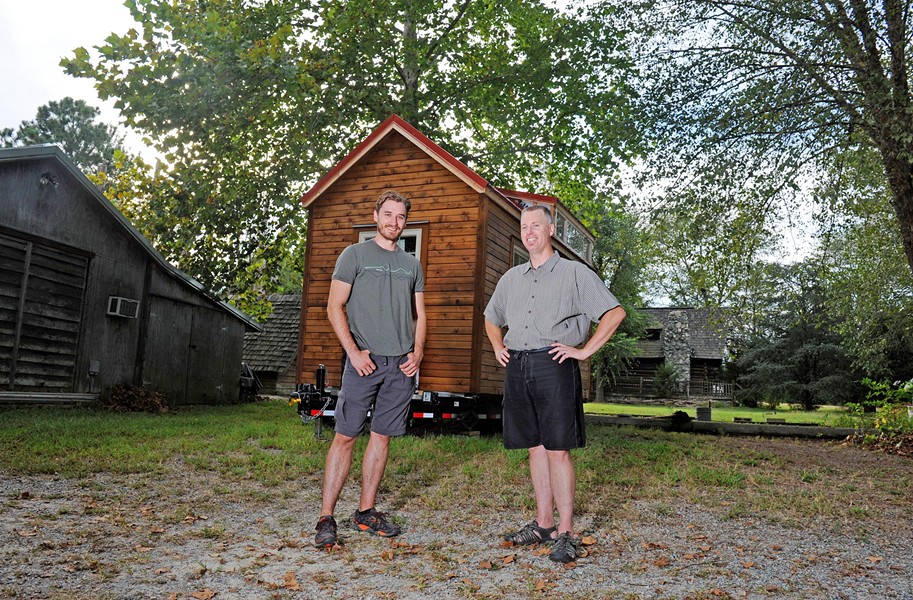 Scott Elmquist Seth Numrich, the 28-year-old actor who plays Ben Talmadge in AMC’s “Turn,” says he’s always been curious about living in an extra-small house. He’s building his on land near Ashland with encouragement from Thom Stanton of Timber Trails and the Virginia chapter leader for the American Tiny House Association.

Actor Seth Numrich was ready for a change. He’d been living in Manhattan for about 10 years when he was cast in the AMC network’s new television series, “Turn,” in 2013.

Filmed around Richmond, the historical spy drama gave the 28-year-old an opportunity to check out the area for the first time. Numrich fell in love with the culture, nightlife and variety of dining options, as well as the James River and its trails.

Soon he started thinking about living here. And he had something unique in mind.

Some six or seven years earlier, around the time he graduated from the drama program at the Julliard School, Numrich read an article in The New York Times about tiny houses. “I didn’t know anything about them,” he says. “I was just fascinated by them.”

The idea of living in unusually close quarters has started to become a captivating concept in a nation that generally believes bigger is better. Photos of tiny houses catch fire across social media channels. A program on the FYI network called “Tiny House Nation” is capitalizing on the trend. The show follows hosts John Weisbarth and Zack Giffin on renovation projects across the country. They aim “to show off ingenious small spaces and the inventive people who live in them, as well as help new families design and construct their own mini-dream home in a space no larger than 500 square feet.”

A typical Richmond home is about 1,500 to 2,000 square feet, real estate broker Christopher Small says. But a tiny house is generally considered about a tenth of that — around 300 square feet, a little more, a little less in some cases. The allure seems to be simplicity, creativity and mobility.

Numrich was charmed. Like most New Yorkers, he was accustomed to living in small spaces. But the dream of moving into a tiny house as his home base never seemed like a reality until he came to Richmond. 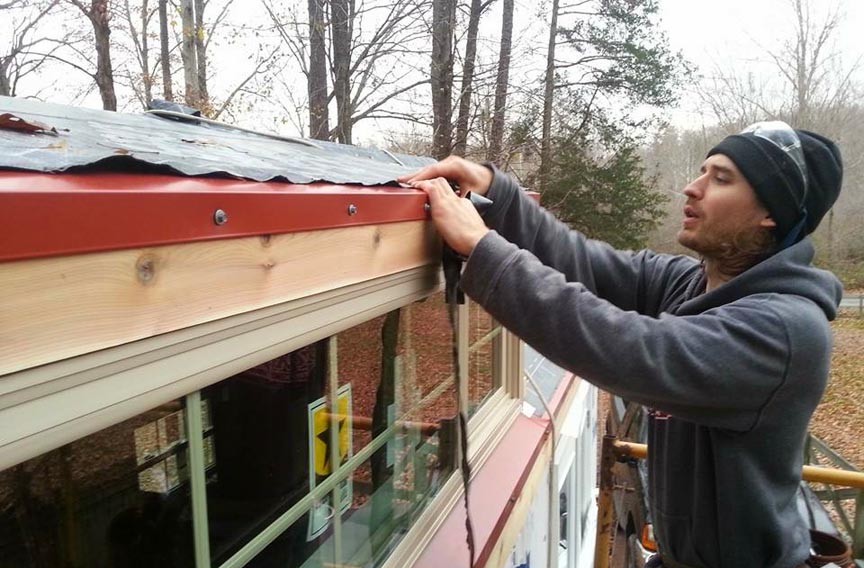 “I got to a certain point where I was craving some sense of home,” Numrich says. “And that’s when the tiny house idea came back into my head.”

“At first, it still felt like this thing that was kind of crazy and kind of extreme,” he says, “but the more I thought about it, and the more I sat with it, I thought, ‘There’s no reason not to.’”

For him, it’s also an environmentally conscious choice. “I try and do my best,” Numrich says, “but a lot of times I’m still living in a way that has a lot of negative impact. So the tiny house is a way to put my money where my ideas are.”

The other big impetus was connecting with Thom Stanton, who helped connect him to the tiny house community in Richmond, he says — “which is surprisingly vibrant.”

Stanton is the lead organizer of the RVA Tiny House Team, the Virginia chapter leader for the American Tiny House Association and the founder and chief executive of Timber Trails. His company provides services to enable do-it-yourself homeowners and supports professional builders during their cabin, cottage and tiny house projects.

“We just hit it off right away and became friends,” Numrich says of Stanton, who’s been an integral part of the construction. “He helped me with the design of the house and put me in touch with all of the places where I ultimately gathered materials from.” 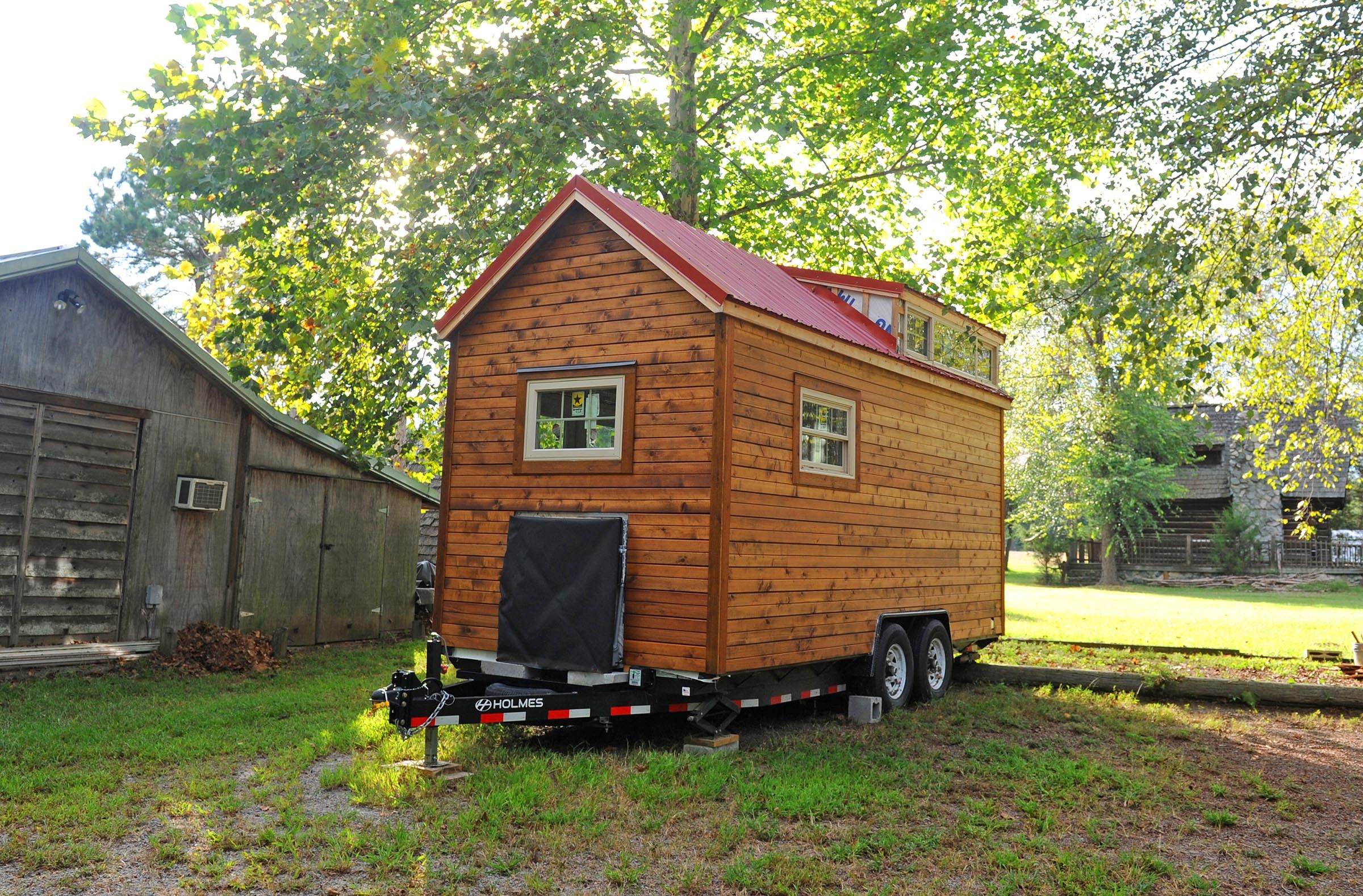 “He had no prior experience in building,” Stanton says of Numrich. “But he was quick to learn and willing to figure it out. He wanted to master a new skill, so that’s the perfect combination.” The two have spent many hours joking around the work site and sitting side-by-side working on the design.

The house is just outside Richmond city limits — he prefers not to be too specific — on land that’s owned by someone else. The goal is to move into the place this winter.

As for the next phase of the project, when Numrich isn’t filming the third season of “Turn,” he says, “If the weather’s nice enough, I might be camping out on the land, borrowing Thom’s shower, and finishing up work on the house.”

When not camping, Numrich is staying in Stanton’s house. Stanton and his wife hope to sell their traditional house as soon as possible and transition to living in a 300-square-foot recreational vehicle.

“The popular look of tiny houses is the idyllic house, next to a pond, in the middle of the woods,” Stanton says. But not everyone is looking to go off the grid, he adds: “For many, the dream is to build tiny houses in communities with other people who are like them.”

For pharmacist Sabrina Jones, it’s a question of lifestyle — and bills.

After going through a divorce, and the subsequent short sale of her previous house, she’s fed up with paying a mortgage or rent. “My credit was ruined,” she says. “I make a decent living as a pharmacist, but I still have bills. I just want a simple life.”

Embracing a tiny house, where she plans to move with her daughter, who’s 9, will enable her to pay for the place in cash.

So she’s been attending tiny house workshops, and spent some time in tiny houses while on vacation with her daughter so they could feel things out.

Jones has talked with her daughter about how they’ll handle sharing such a small space. All in all, they’re comfortable with the idea.

And she’s taking great care to follow the rules, she says.

Zoning laws for such small houses remain mostly a gray area for homeowners in the Richmond area, Stanton says.

He’s been asked to speak for the tiny house community next week at a meeting of Central Virginia zoning officials, where he hopes legislation will take shape to clarify such issues.

In the meantime, he suggests that prospective tiny house owners do their homework before making an investment. “Solve your parking space first,” he says, “then talk with your county to make sure it’s legal.” 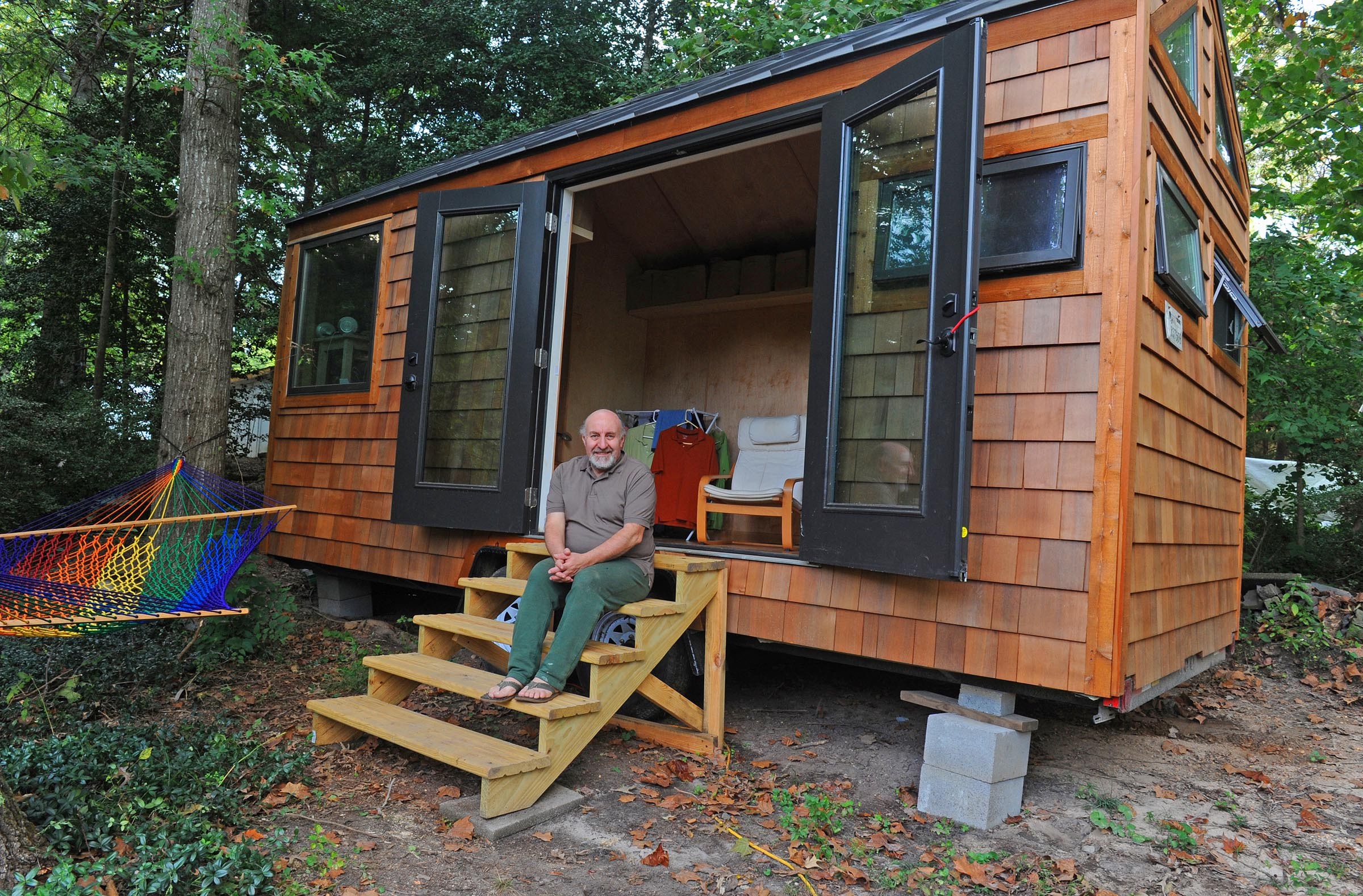 Some folks are hoping to avoid all the trouble, such as Derryl Cocks, who works in information technology.

“I’m living in a county where it’s kind of debatable as to whether it is legal in zoning terms,” he says. “So I’m living beneath the radar.”

He lives in a tiny house community in the Richmond area full time.

“I wanted to keep my carbon footprint low,” he says. “I also own an electric car, so I don’t use gas.” His tiny house is fully paid for, and his goal is to work part-time from home and spend his free time helping others get into the tiny house movement.

Jones says she’s trying to keep things above board. “I want to do this legally,” she says of the zoning questions. She’s been in touch with the county planner frequently and they’ve been working together to make her home a lasting one.

People get into the idea of building tiny houses for several reasons, Stanton says, whether it’s a matter of privacy, going green, saving money, spending more time outdoors, or just living more simply. But he suggests that the socio-economic climate has something to do with the growing movement too. A tiny house can cost around $60,000 — some are much less.

“Tough times or changes in financial life for people who are caught between two large population groups,” Stanton says. “The baby boomers are leaving jobs and the millennials are there to take them, while the rest of us have reached a level of stagnation or middle management.”

But owners usually have at least one thing in common, he says: “The dream is that people want their own ‘Little House on the Prairie.’” 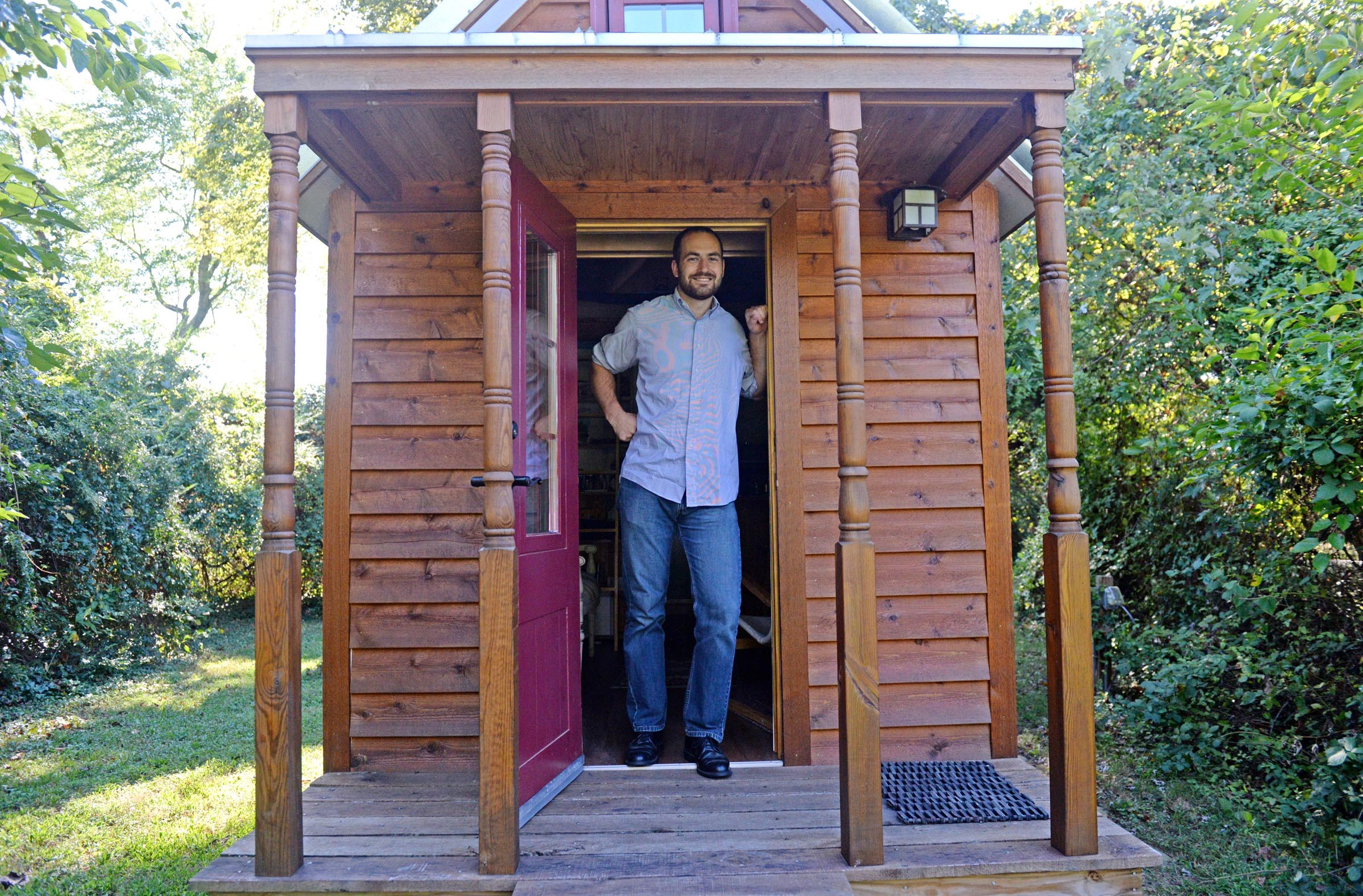 Kevin Riedel graduated from Virginia Tech in 2010 with a degree in forestry, and built his first tiny house a year after graduation for about $20,000. Then he had another idea last year, he says: “I wanted a little retreat or vacation spot.”

There’s no bathroom or kitchen, but both houses are located on the property of a larger house that he owns within Richmond city limits.

For Riedel, who recently enrolled in seminary at the Catholic University of America, adjusting from a more spacious dorm room to the tiny house has been an interesting adjustment — and an exercise in balance.

“I’m trying to maintain the simple way of life,” he says. “When you have more space, you kind of start to fill that space. I’m trying to have what I need but not much more than that.” S 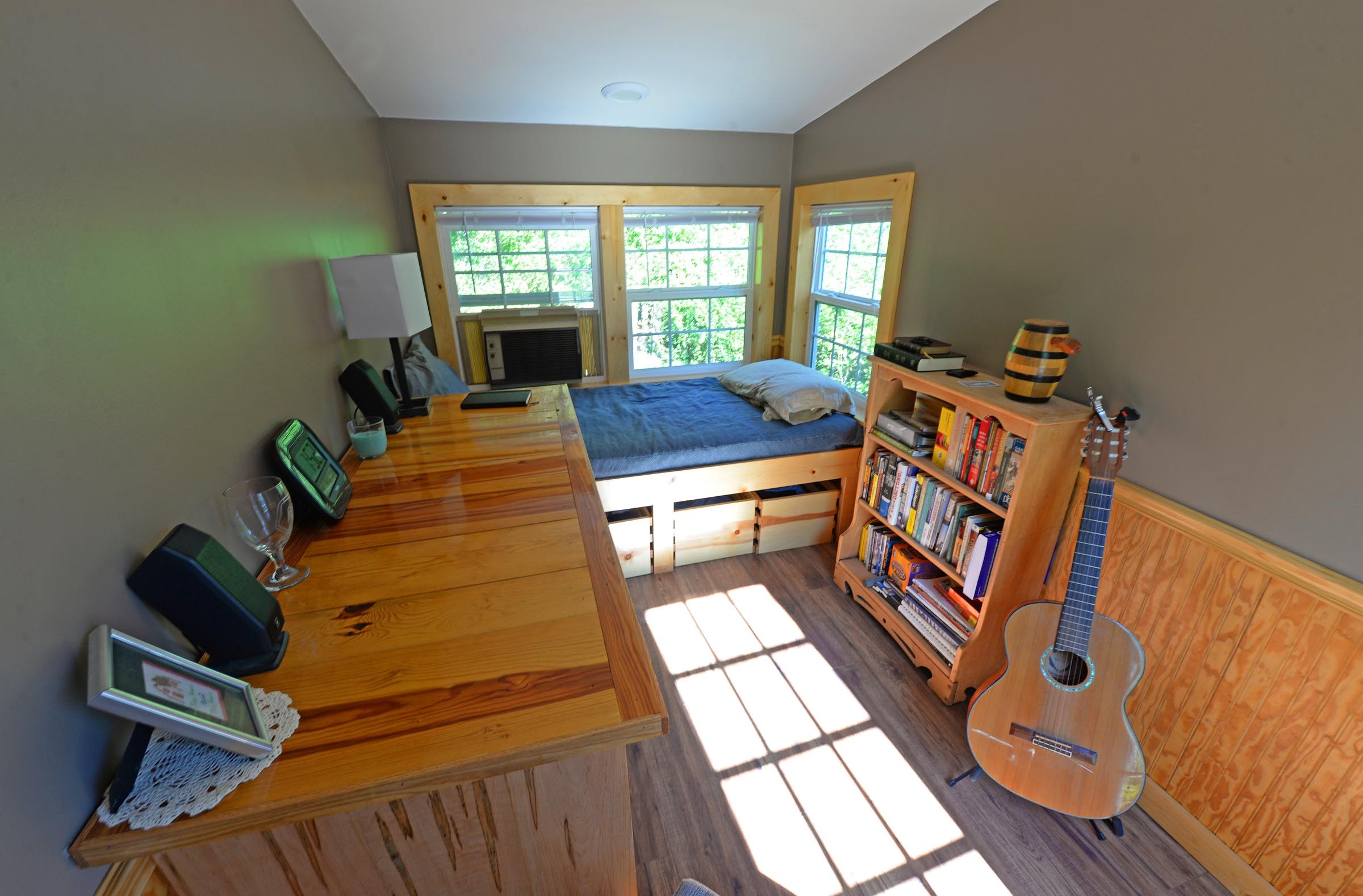