A filmmaker's tips on how to prevent a boring zombie flick. 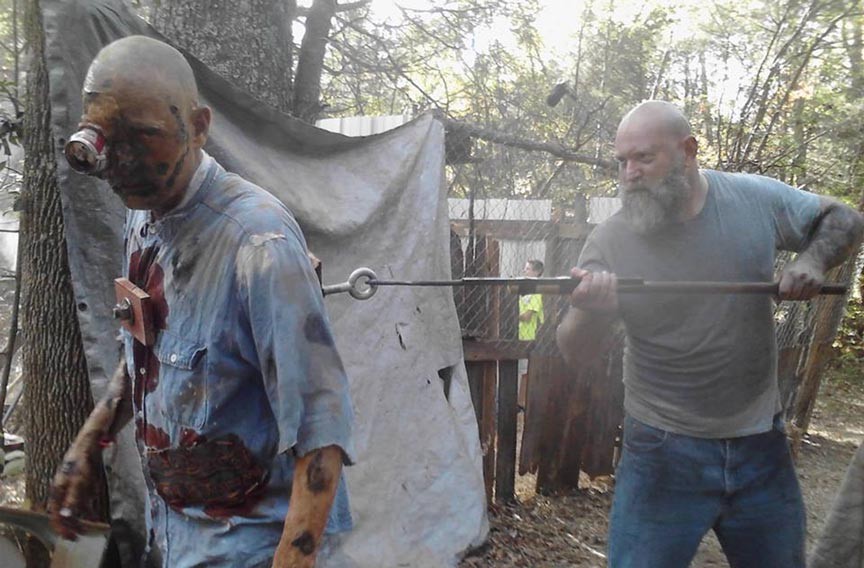 When you see Brad Pitt running from zombies in 3-D, you can almost be forgiven for thinking the genre has been done to death. But local filmmaker Jim Stramel, who you may remember from "The Thrillbillys" starring Wes Freed or the even rarer 16 mm films "My Ass Is Bleeding" and "Pitiful Reflections," remains undeterred. Using sets built in Powhatan, he recently finished shooting the first episode of "Reviled," a feature-length story broken into six bloody episodes that centers on an underground ring of zombie fighting rednecks. Style Weekly asks him to share the top five ways he plans to keep zombie story fresher than blood stains on the highway. — Brent Baldwin

1. No apocalypse. "As much as we want a zombie apocalypse so that we don't have to do our homework or pay our credit card bills, it ain't gonna happen. Just like tainted spinach, bird flu, mad cow and commies, things will be crazy in the short-term and hyped up on the 'news,' but the world doesn't end, things calm down and the government smoothes it over with lies and the National Guard."

2. Going rabid! "These things are crazy — rabid, mad, berserk — not shambling morgue rejects bumping into walls and each other. Our zombies are crazed animals, attacking anything, including each other, which actually makes for a pretty good spectator sport as long as you can keep them at a hook's distance and pointed at each other."

3. Commoditization. "It's not a world of a few people hiding out against a mass of the living dead, it's a dirty underground world of people trying to get and maintain the handful of zombies that are left. The National Guard has come through and cleaned up the initial zombie-causing problem and re-killed/hauled away the zombies. But they missed a few, which have ended up in our fight pits — that means we have to keep fixing what we have, repairing them over and over — which leads us to ..."

4. Sponsorship. "Fighting, transporting and repairing broken zombies can be expensive and difficult, especially by people in a depressed economic region that knows a lot more about how a Ford 150 goes together than an arm or a leg. So most zombie handlers are forced to seek outside sponsorship from local businesses, nailing, bolting and stitching advertising patches onto their zombie fighters."

5. Suspense. "Hey, this is only episode one, I can't tell you everything!"