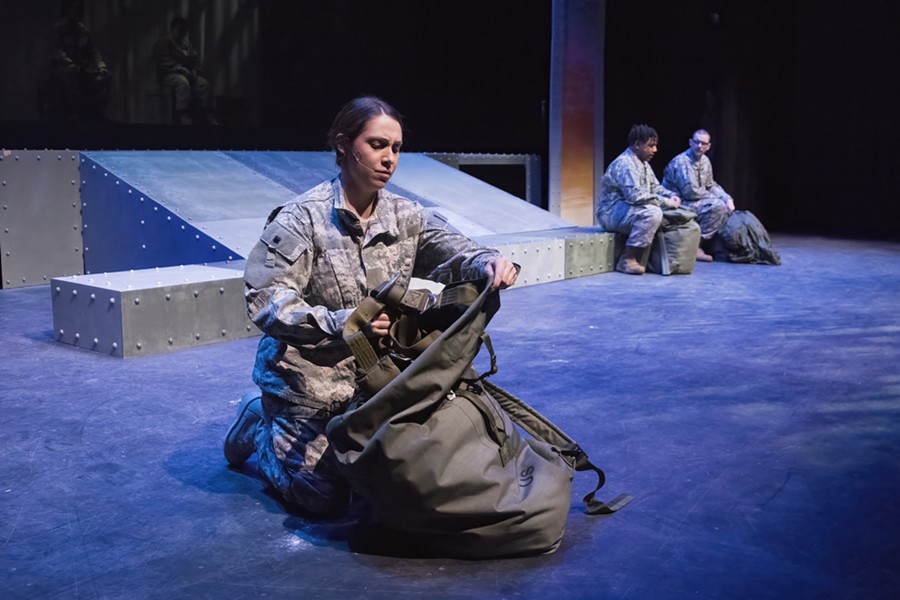 knows firsthand what serving in the modern military entails: she was active duty in the Army for eight years, followed by four years in the reserves. And she says our perceptions about war are decades out of date.

“We want to relive World War II in our culture; it's very easy for us to want to go to the last true victory we had,” she says. “One of the purposes of ‘Jump Baby’ is to show what it looks like on the inside of an all-volunteer military with no draft. This is what it looks like for all volunteers to be serving for 20 years.”

“Jump Baby” will be the inaugural show in the new Studio Series presented by Brightpoint Community College on their Midlothian campus. The show follows the lives of a military husband and wife who have to juggle maintaining their relationship and raising a family between stints in Iraq and Afghanistan. The characters are based on Landsee and her husband, who chalked up six deployments between them.

The show was borne out of the Mighty Pen Project, an initiative that author David L. Robbins offers through the Virginia War Memorial, encouraging and assisting veterans in telling their stories.

Landsee, a lawyer who honed her facility for language serving in the Army Judge Advocate General’s Corps, wasn’t sure how her story would stack up against heroic tales from combat. She was eventually convinced she had a unique perspective worth sharing.

“You don't hear a lot of accounts of war from a female perspective and so I don’t think anything like ‘Jump Baby’ exists in our current war story cannon,” Landsee says. “One of the ironies I’ve discovered is that theater and the military are very similar in many ways, like they’re both still very male dominated.”

Four works from the Mighty Pen Project were presented collectively as a production called “War in Pieces” at the Firehouse Theatre in 2021. At that point, Landsee’s show contribution was called “Soar.” Kerrigan Sullivan, the department chair for performing arts at Brightpoint, was paired with Landsee to direct “Soar” and has since helped shepherd the work to its current form. 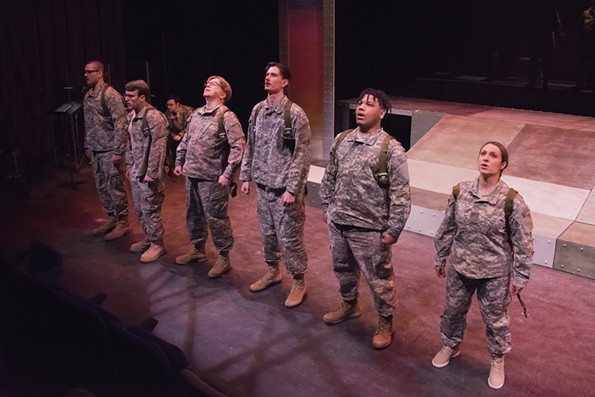 “I’ve been passionate about new work for a very long time,” says Sullivan, who came to the Richmond area 20 years ago from New York after earning degrees at both New York University and Brooklyn College. “We’ve done a bunch of table reads with students and they bring so much to the table. To be able to facilitate the extensive development process a new work needs and to share that with students has been really rewarding,” Sullivan says.

Landsee submitted the entire one-act script of “Soar” as her writing sample in her application for a National Endowment of the Arts fellowship. Receiving that fellowship in 2021 gave her the support needed to expand the work into a two-act musical.

“Rachel has really broadened the story out,” says Sullivan. “‘Soar’ was about a strong female lead; ‘Jump Baby’ develops a strong male lead as well, without losing the strong female focus.” Many key aspects of the show were kept: The airborne operation that provided a dramatic opening for “Soar” remains in the expanded show but has been pushed back a few scenes.

“It’s much more about normal people in extraordinary circumstances who have to figure it out together,” adds Landsee.

Both Sullivan and Landsee think shows like “Jump Baby” can help expand the audience for theater. “Theater, like any art form, has to continue evolving and changing and reaching different groups of people,” says Sullivan.

“People come to the arts for all different reasons,” says Landsee. “For some people, this show will be about discovery. For others [like veterans], it will be about processing. With this show, I want to deliver some hard truths, but I want to do it softly, in an engaging way.”

She says humor is key to that engagement. “Lucky for me, there's humor in every whacky direction in the Army: There's slapstick humor. There's dark humor. One of the only acceptable ways you could emote in the Army was through humor,” Landsee says.

At the same time, a tough question the show gets at is “what does service to country mean?” “When you serve your country you really want it to be meaningful,” says Landsee. “You see veterans in the community, and we’re trying to have a positive impact in the world. But with Iraq and Afghanistan, you think, ‘did we affect anything? Did we do anything?’”

“Jump Baby” premiers at the Lynn Theatre on the Midlothian Campus of Brightpoint Community College and runs from Jan. 27 to Feb. 5 with additional livestream performances through Feb. 12. Tickets and information available at: https://www.brightpoint.edu/academics/career-clusters/arts-communications/upcoming-performances/