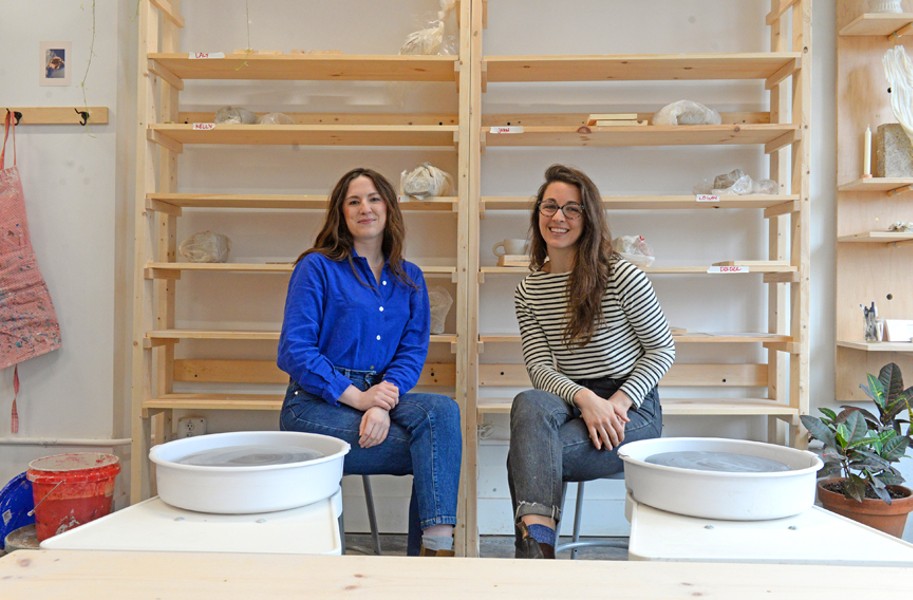 Scott Elmquist Emily Wicks and Alexis Courtney met in the clay studio at the Visual Arts Center of Richmond and soon earned a grant from CultureWorks to help them open their own studio.

Last year was a whirlwind for friends and business partners Emily Wicks and Alexis Courtney. In less than a year, their idea to create a ceramic studio went from concept to reality when they co-founded Hand / Thrown Studio along a stretch of redevelopment in the North Side.

Transplants to Richmond from Seattle and Delaware, the friends still are keeping their day jobs: Wicks is the program coordinator at Quirk Gallery and Courtney is an independent commercial photographer who specializes in portraits, products and interiors.

They met at the Visual Arts Center of Richmond in the clay studio, where Courtney was taking a class and Wick was a monitor. They enjoyed taking classes and teaching at VisArts -- Wicks, who earned her bachelor's degree in craft and material studies from Virginia Commonwealth University, taught ceramics; and Courtney, who holds two fine art degrees in photography, taught photography. But both were looking for something different.

So they started searching for a studio to share. When they saw the empty space at 123 W. Brookland Park Blvd. that a developer wanted to renovate, the possibilities started to grow from there.

"We wanted to be the intermediate step between a very large community studio where you're limited with one shelf for your work and starting your own home studio, which is a lot of overhead," Courtney explains. "What can we offer that's in the middle? We came up with a membership-based 24/7 access studio that also teaches and hopefully gives our members an opportunity to teach as well if they want to."

An artist grant from Culture Works was the driving force to making their dream of owning a clay studio into a reality. "We had a week to get [the grant] together," Courtney and Wicks say in unison amid laughter.

They were awarded $2,000 and those funds were combined with personal savings, loans and Courtney's business background running her own photography and small ceramic studio, East Clay, for the last decade. They also employed the aid of local artists and business owners to make custom shelves or provide business knowledge.

"That's the thing, too, about the [ceramic] community. It's so opening and welcoming," Wicks says. "If I'm doing something and someone goes, 'Well, how do you do that?' it's something where everyone shares and is honest about it. That's one thing that we found so helpful when opening [Hand/Thrown Studio]. We had a million questions."

Together, the women officially moved into the renovated building in September. In October, the pair launched a small retail storefront and welcomed three additional artist members who have access to the studio and its resources. By November, Hand/Thrown Studio was an exhibitor at the Craft and Design sale in the Main Street Train Station and in February, the duo launched adult classes — beginning clay and wheel throwing — as four-week sessions taught by Wicks and Courtney in the shared space.

"[In Richmond] we have Clay Works, Shockoe Bottom Clay, Rosewood, [and] Claywork Supplies," points out Wicks. "We have all of these beautiful resources in town and with VCU, so it's something where maybe someone graduating from VCU needs the space and they want to invest. … Or maybe they just are excited because they took a class once in college and they want to come back."

The women eventually hope to provide intermediate classes and expand their class offerings; both are keen to offer instructional time for kids and teens, especially through the public-school system or after-school programs. Other long-range goals include increasing their member base and offering pop-up exhibitions biannually for members to sell their work.

"We want to be a community of makers where we're able to kind of live together and learn from each other every day," Wicks says. "Ceramics is such a shared process."