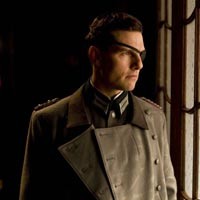 After all the Sturm und Drang that has accompanied the production and release of “Valkyrie,” a Tom Cruise vehicle depicting the most famous of the failed plots to assassinate Hitler, it seems rather anti-climactic to report that the film is a perfectly serviceable entry in the never-ending line of glossy Hollywood treatments of World War II. Featuring a glittering cast of mostly British worthies and meticulous scenic design, “Valkyrie” is basically a caper picture with a tincture of moral heft mixed in, like vitamins in a sugary breakfast cereal. It all goes down easily, but without offering any real sustenance.

At the helm is director Bryan Singer, whose earlier work in “The Usual Suspects” and the first two “X-Men” films serves as a good forecast of the quick-paced, economically handled yarn of intrigue at the center of “Valkyrie.” Perhaps in a bow to the momentousness of the events chronicled — the 1944 plot by high-ranking military men against their leader — there are moments when the film hints at the many conundrums that faced the would-be FA¬hrer killers: whether, for example, the face of the new regime should be a political or a military man, or what a post-Hitlerian peace settlement might look like. But Singer is too much of a showman to suppose that his audience has much interest in such stuff — that's what “Masterpiece Theater” is for — so whenever Aryan jawboning threatens to bog down the proceedings, he sends in Cruise, who, as if channeling worried studio executives, calls for less deep thinking and more high explosives.

Poised at an uncomfortably delicate point in his career, Cruise has made an interesting move in taking the role of a Nazi in his bid for renewed respectability, but then Claus von Stauffenberg was no ordinary Nazi. The product of an aristocratic military class whose members often regarded the low-born Hitler as an overreaching parvenu, Stauffenberg cut a dashing figure, even after losing a hand and an eye in the war. Jaw clenched and shoulders thrown back, Cruise plays him as a righteous, uncompromising man of action determined to prove to the world that not all Germans are “like Hitler,” and someone increasingly furious with the ditherings of his less resolute co-conspirators.

Wielding his good looks and imposing physical presence like a shield, Cruise is more than equal to the task — at the expense, however, of giving Stauffenberg anything like an intelligible inner life. The man himself was a mass of contradictions, disposed to regard Poles and Jews as rabble and filled with daffy notions of Germany's holy mission in the world. The main thing he disliked about Hitler might have been that by 1944 it was clear he was a loser. However, these are not attitudes appropriate for a star bent on rehabilitation, and in any case are not in Cruise's line.

In place of character or meditations on the murk of history, “Valkyrie” settles for action, suspense and old-fashioned hamminess, the latter provided in part during some scenes of very accomplished sniping among the British mainstays of the cast, a group filled out by such luminaries as Kenneth Branagh, Tom Wilkinson, Bill Nighy and Terrence Stamp. The Hitler of the piece is played by David Bamber, perhaps best known as the intolerable toady Mr. Collins in the 1995 BBC production of “Pride and Prejudice.” Dreamy and morose, Bamber's Hitler is a pathetic shell, as if, having plunged Europe into a sea of blood, he had already accomplished his life's work, and was merely hanging about listlessly for the dAcnouement.

As for the details of the conspiracy itself, even the German press, which for years formed a united front against the project, has admitted that its worst fears of cinematic distortion have not been realized. Notably, “Valkyrie” is at its most thought-provoking when furthest away from the breast-beating heroics of its embattled star. The plan to kill Hitler and seize control of the government might have been a very good one, but was done in by a host of contingencies, each tiny in itself. As depicted here, the conspiracy received its deathblow when the telephone operators were ordered to stop calls in and out of Hitler's command center. That may or may not be historically accurate, but “Valkyrie” at least gives the impression of having done its homework on military matters. Given that so many feel our real leaders nowadays haven't done theirs, that's surely something. (PG-13) 120 min. HHHII S