Falling marble and the new face of City Hall. 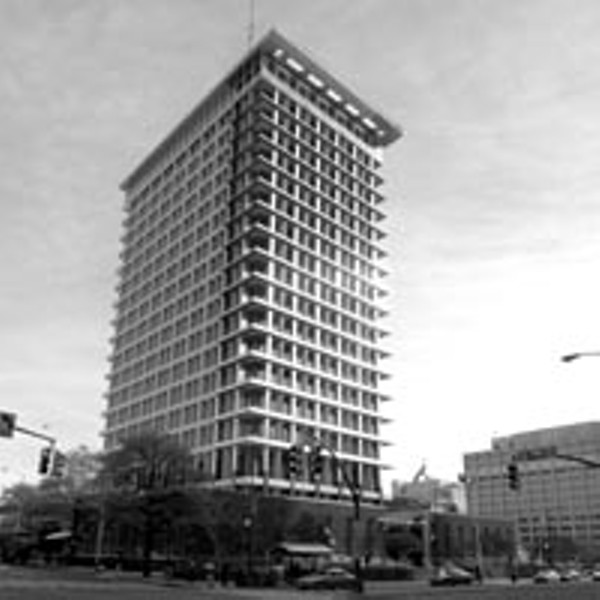 One proposal: Demolish City Hall. This was tempting because the building was underwhelming both functionally and architecturally. Another — and less expensive — solution was to remove the problematic marble and re-clad the entire building.

Wisely, during the facelift process, the Richmond firm of SMBW Architects accomplished a few other nips and tucks, as well. First, it shifted some of the building's ceremonial emphasis from the Marshall Street side to its front on Broad Street. Secondly, it created a more welcoming sense of entry at three of the city hall's four front doors. Finally, it lightened the overall heavy-handed architecture of the exterior, which could charitably be described as Mussolini-Modern. "It looks like a Polish building during the Communist era," a native Pole remarked one recent morning with no provocation as we examined the soaring hulk.

With all the brouhaha over the proposed performing arts center and only a hole in the ground in the 600 block of East Broad Street to show for considerable expense, it's heartening that two blocks away City Hall's $19.5 million re-cladding is complete. And yes, it is a success overall.

City Hall opened in 1971. It consists of a one-story base, or plinth, that fills the block bounded by Broad, Marshall, Ninth and Tenth streets. A central office tower rises atop this platform. Designed by the Richmond firm of Ballou Justice Upton, it was a dour and conservative building when it was completed. Initially covered in white marble, it was classically symmetrical but used modernist, pre-fabricated repetitiveness to eye-numbing effect.

Although City Hall addressed four downtown streets with front doors of equal importance (one of the most successful things about the place), the most formal entrance was intended to face Marshall Street. Here, a huge city seal hangs above the entrance and the doors are close to the sidewalk.

The building's original scheme called for this Marshall Street entrance to address a grand civic center. This complex of public buildings was to be laid out among parks and pedestrian walkways stretching northward toward Interstate 95. Think Pierre L'Enfant's grandiose grid for Washington, D.C., meets Oscar Niemeyer's utopian Brazilian capital. The Richmond Coliseum, the city's Safety-Welfare Building and City Hall were the net result.

Since planners' dreams didn't materialize north of City Hall, SMBW Architects wisely gave the Broad Street front increased emphasis on the south side. This was accomplished successfully with the addition of a dramatic, extended, aerodynamic overhang at the roof level, which sweeps upward slightly and gracefully.

At the Broad Street entrance, which is recessed within the first-floor plinth, SMBW hung a glass and steel canopy that says "welcome" and added some real degree of shelter from the elements as one passes from sidewalk to lobby. Similar canopies have also been added at the Ninth and 10th street entrances.

These additions at street level and at the cornice of the building delight the eye — an element sorely missing from the previously monotonous exterior.

But more importantly, the entire building's perceived bulk has been lightened significantly. The white marble veneer on the first-floor podium has been replaced with black granite facing. This adds heft at the base.

And if a perception of weight has been added there, the tower itself has been significantly lightened aesthetically. On the tower's four sides, alternating vertical pier columns that were not structurally supporting have been removed to create lighter- and fresher-looking fenestration.

Replacing the troublesome marble, the Broad Street front of the building has been re-clad in stainless-steel sheathing. Along the Ninth, Tenth and Marshall street fronts a painted aluminum cladding is less dramatic but crisp.

Importantly, the stainless steel on the south side of City Hall reflects the ever-changing light of day from dawn into darkness. If in bright sunlight the building looks a little tinny, all is forgiven on other occasions when the reflective qualities approach something sublime. At night, when lights from within the building join forces with reflected light from urban activity of vehicles and nearby buildings, City Hall now shimmers.

Modernism, like any architectural direction, is a work in progress. There is no right or wrong way of doing things. And while some may regret the transformation of a late 20th-century landmark (and we are in the process of losing a number of them here and elsewhere) the city had few options at City Hall: A fix had to be found for the buckling marble.

Fortunately, in the savvy hands of SMBW the downtown cityscape has received an intelligent and handsome solution. As a native of New Jersey who lives in Richmond said, "It's got a big city look." S