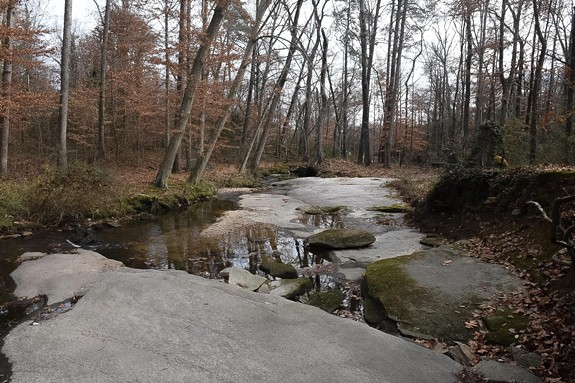 Despite City Council’s vote against the project, Richmond’s Department of Public Utilities has declined to withdraw a permit application for the controversial stream restoration of Reedy Creek.

The $1.2 million project seeks to limit pollution in the James River from upstream of Forest Hill Park by modifying the creek to help it flood more naturally.

The plan complied with targets set by the federal Clean Water Act to reduce pollutants entering the Chesapeake Bay from its six-state watershed and triggered state funding.

But it hit a snag when independent evaluations suggested that the project wouldn’t alleviate erosion and pollution concerns. Nearby residents also opposed the proposed removal of 424 trees.

The utilities department had planned to pay for half of the project, with $635,000 coming from a state grant. But City Council voted 8-1 to refuse the grant money last month, essentially killing the project.

Despite that move, the application remains on the docket of the Army Corps of Engineers. And the Virginia Department of Historic Resources submitted its comments Wednesday, clearing the way for a restoration permit to be issued by year’s end. The corps is reviewing the application and can’t force its withdrawal, spokeswoman Silvia Gazzera says.

The application considers the specifics of the project, as well as its impact on other resources. The Department of Historic Resources has concluded that nothing historical stands in the way of the restoration.

The city’s utilities department is keeping the application in play because it wants to get its money’s worth, spokeswoman Angela Fountain says.

“The city already had paid all the money to get our permits in place prior to the City Council vote,” Fountain says. “The application is active because they still owe us an answer for the process we already went through.”

The project won’t go forward, she says, but the department can use the permit for any future project done on that land. Not true, says the Army Corps of Engineers.

“They would have to reapply, absolutely,” Gazzera says. “This application is just for Reedy Creek, specific to the details of that project. If they wanted to reapply for a different project, they’d have to submit a completely new application.”

Opponents worry about the city getting a permit to move forward with the project.

“We’re not comfortable until that permit application is pulled,” says Bill Shanabruch of the Reedy Creek Coalition.

Mayor-elect Levar Stoney indicated his opposition to the project during the campaign. A request for construction bids, which would be the next step, likely would happen in his administration.

Regarding the utility department’s desire to get the answer it paid for, Shanabruch notes that the city was well aware of public opposition to the project before the department spent the funds.

The city has paid the corps for the application, and the state’s Department of Historic Resources also is involved. It’s unclear how much that application costs.

“I feel like the army corps should be begging DPU to remove the permit,” Shanabruch says. “Because they’ve wasted an immense amount of time on this.”