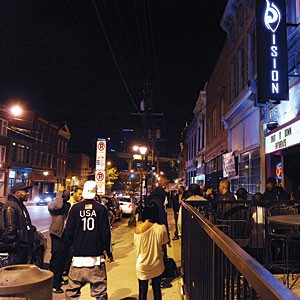 With a little more than a week to go, there was no application process for nightclub owners seeking to comply with the city's new public dance-hall ordinance, according to documents obtained by Style Weekly.

On Nov. 4, city officials were still scrambling to put together application forms and notify nightclubs, restaurants and other businesses of the process for complying with the new dance hall ordinance, which City Council passed on Sept. 13.

The law created a host of new regulations in an attempt to curb nightclub-related violence — and hold property owners accountable for violence that occurs outside their establishments. The first requirement: Nightclub operators had to submit a permit application no later than Nov. 13, or face a class 3 misdemeanor.

But the forms and process for submitting the application didn't exist. After several media inquiries from WWBT-12, WTVR-6, the Richmond Times-Dispatch and Style, city officials scrambled to respond.

In an e-mail Nov. 4 to Jeffrey M. Bourne, deputy chief of staff in the mayor's office, A.R. Abbasi, the city's acting commissioner of buildings, was still seeking forms and information from the mayor's office and the police department in order to administer the process.

“It had been agreed upon that this office would be the first point of contact for the dance hall applicant,” Abbasi writes. “However, it was my understanding that we were to be supplied” with, among other things, a letter from the police department, applications to be distributed and contacts within the police department and the office of the chief administrative officer to assist nightclub operators.

“As of today's date, this office has not received any information or materials on the above,” Abbasi writes on Nov. 4. The letters, and the forms, were mailed to 400 nightclub operators, restaurants and other businesses Nov. 5.

While nightclub operators scrambled to get more information, the Richmond Police Department was seeking input the week before.

“I remember the forms and drafts being disseminated, however, implementation of the process has not been finalized,” the police department's legal counsel, Victoria Benjamin, wrote in an e-mail Oct. 25 to Byron C. Marshall, the city's chief administrative officer.