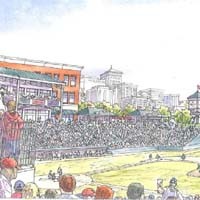 Now that the Shockoe Bottom ballpark proposal is officially dead, what better time to peruse the city's $100,000 financial feasibility study of the project?

In May, Mayor Dwight Jones released an executive summary of the report, which concluded that Highwoods' proposal couldn't be financed without the city's support. But details were limited. In the full report, the consultants outline three scenarios for financing the project.

The first, without the city's financial support, offers various takes.

“In the best case the revenue is just adequate after the initial five years to meet the debt service on the bonds over a 30-year period,” the consultants conclude. Highwoods had planned to float $70 million in bonds to pay for the ballpark, which would be paid back over 30 years with the retail, real estate and other tax revenues generated by the $363 million development. “The City assumes financial risk in the early years and achieves no economic benefit in the form of incremental tax revenue from the project during that 30 year period,” the report continues.

“In the worst case the revenues are not adequate to support debt service and the project may go into default. …”

As far as financing, the consultants conclude that the project would be “feasible” if the city lends financial support to back the bonds. It also proposals a third scenario in which the Richmond Metropolitan Authority refinances the remaining debt on the Downtown Expressway, and the city begins collecting the $57 million the RMA still owes the city from the initial construction of the expressway in the 1970s.

Tapping into that pool of money that's expected to be paid back — not to mention the future revenues the city stands to collect from the tolls after 2022, when the expressway is finally paid off — offers a glimpse of things to come for cash-strapped Richmond.