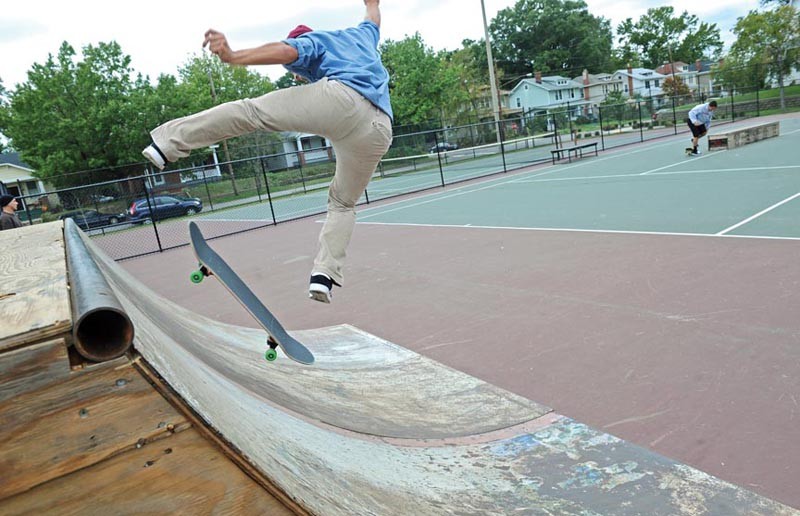 Changes are under way at Richmond’s only officially sanctioned skateboard park — and not all of them are necessarily welcome.

Located on what was formerly a tennis court at Carter Jones Park in South Richmond, the ramps, vertical walls and other obstacles that remain are shorter. The city ordered four of them removed last week — all more than 4 feet tall — citing concerns of safety for younger skaters.

The change followed reports that a skateboarder was injured while attempting to navigate one of the park’s taller ramps. Contacted last week, Tesha Wilkins-Davis, a spokeswoman for the Department of Parks, Recreation and Facilities, says it is unaware of the skateboarder’s age or the nature of the injury. The city has no plans to remove the estimated 10 obstacles that remain, she says.

But some local skateboarders say they’re worried that the incident could stymie efforts to secure funding for additional skate parks.

Bernie McGrew is part of the loose group of older skateboarders attempting to persuade city officials to either build more skate parks, or allow boarders to construct and install skateboarding equipment on city-owned property.

The latter was how the skate park at Carter Jones came into existence, says McGrew, who’s been skating in and around Richmond for most of his 38 years. The group’s campaign to build it was championed by former director of parks and recreation, J.R. Pope, who resigned last year after a scathing report by the city auditor detailing incidents of improper billing by department employees.

Local skateboarders since have been consulting with parks and recreation officials on the proposed construction of a large, city-built park. McGrew says the city’s favored plan would entail building one central facility.

But one park won’t accommodate the hundreds of youth that make up Richmond’s skater community, McGrew says. A system of smaller parks would “give the kids some variety in the setup,” he says, and generally be less crowded.

Pat Lowery, member of moped club Hell’s Satans and a skateboarder, is creating a nonprofit that he hopes will generate enough donations to pay for the construction of those parks. “All we need is a spot and approval by the city,” he says. “We can do the rest ourselves.”