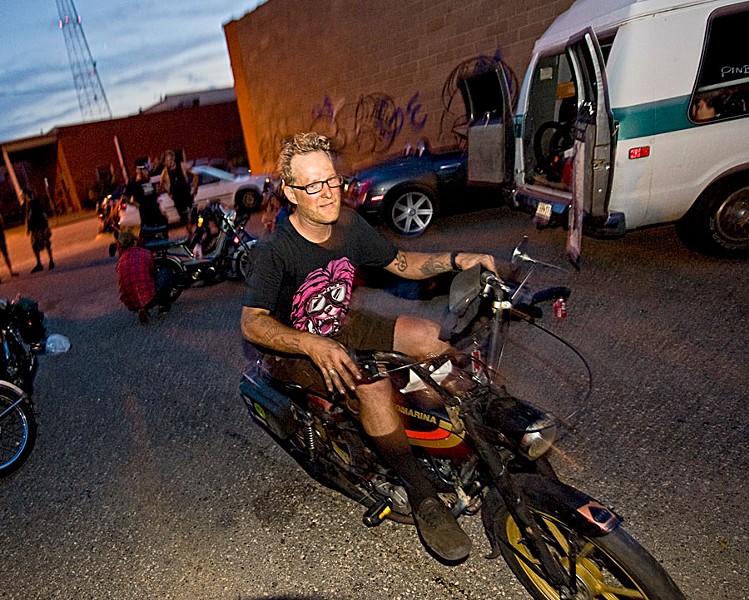 Ash Daniel Shawn Lukitsch tests his bike on Monday night after a round of emergency repairs.

Twelve moped riders competing in a 1,800-mile, first-of-its-kind race from Maine to Florida made a pit stop in Richmond last night. Among the grungy, road-worn riders was local moped mechanic Shawn Lukitsch, who owns a repair shop in Scott’s Addition.

With four days behind him and five more to the finish, Lukitsch has mixed feelings about the ride.

“I don’t know,” he said. “We’ve ridden through a couple spots that were absolutely spellbinding -- like the most gorgeous countryside you’ve ever seen. And that’s juxtaposed with the most arduous, paranoid riding ever; you can’t enjoy it because you’re constantly worried about the noises your bike is making and not getting killed by a car.”

Most people who ride vintage mopeds feel lucky if they make it 50 miles without their bikes breaking down. Relics of the 70s and 80s, the machines sound like weed whackers, are finicky, and prone -- on good days -- to coughing fits that produce thick, blue smoke.

But it’s exactly these mechanical challenges that make a long-distance, low-speed race like this seem somewhat sporting. Organizers are describing it as "pretty much the most epic moped ride that’s been created."

The competition is called the Pinball Run. It’s a cannonball-style race competitors launched from Portland, Maine, on Aug. 30.

The event started with 25 riders. By day two, the number had dropped to 12.

“Half the people showed up with mopeds that broke down the first day -- in classic moped style,” said one organizer, Rob Burrito, whose last name may or may not be Burrito -- though he definitely owns a chain of burrito shops called Roburrito's in Central Pennsylvania, where he lives.

In Richmond, riders gathered at Lukitsch’s shop to drink cheap beer and work on repairs. They ate Little Caesars’ pizza, swapped stories about run-ins with police and described close calls on the highway. Then they set up camp at the shop to sleep before setting out at 10 this morning for their next stop, Wilmington, N.C.

But the riders leave together each morning at the same time and are clocked in later at the day’s destination. Individual times will eventually be tallied to determine who made the overall best time. There may or may not be a $1,000 purse waiting at the end in Key West, Fla.

The run comes with very specific rules, including an outline of what qualifies as a moped for the purposes of the race:

Your moped must have been originally manufactured as a true moped with pedals and an engine of less than or equal to 50cc OEM, but this does not mean you may not install a kit.

Pedals must operate a minimum 1/2 rotation, but they do not necessarily have to actually do anything.

That the riders are relying on old bikes with small engines designed for inner-city travel does not mean they are not going fast. Speeds into Richmond topped 55 mph according to a map that is tracking the riders’ location.

But the high rate of travel and old equipment mean lots of repairs. Lukitsch spent most of his night in Richmond welding a new gas tank onto his bike. He says it developed a fairly serious leak earlier in the day and poured fuel all over his leg. All told, since he left he burned through his spare engine, blew out his clutch, broken his crank, his starter lever and a brake lever. That’s an incomplete list, and, keep in mind, it only accounts for four days of racing.

Lukitsch says he’s not worried about his bike -- he can keep repairing it. He is, however, concerned about the possibility of a wreck. There have been none in the run so far, and Lukitsch says that as long as he doesn’t seriously damage himself, he intends to finish.