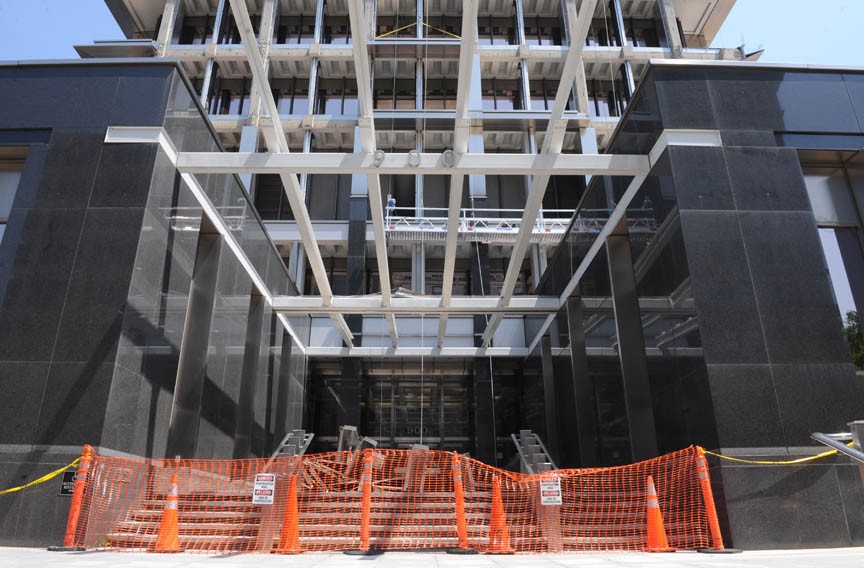 It's been two and a half years, but the building should be restored to its full waffle-iron glory in July if all goes according to plan. In December 2009, huge chunks of ice fell 18 stories from City Hall's roof, damaging the glass canopy and metal facings over the building's Broad Street entrance. Bent metal facings have adorned the side of the building since, and the southern entrance and terrace have been closed during severe winter weather.

City spokesman Mike Wallace said last year that the damage was a result of snow and ice accumulation from the roof's overhang and slope. To remedy this, an architectural and engineering firm based in Fairfax, Dewberry, has designed an electric system to contain and melt snow and ice on the roof. System construction and building repairs began in January.

Don Summers, senior capital projects manager with the city's Department of Public Works, says other renovations include adding new storm drains and a winter-weather detection system that will engage automatically. Snow guards will be added to the building's eastern, western and northern sides, and the glass canopy over the Broad Street entrance will be replaced and expanded.

Construction costs will total $1.079 million, on top of $207,855 for design work. Insurance coverage will reimburse the city for an amount that has yet to be determined.

Renovation is nothing new to the 40-year-old building. In the early 1990s, City Hall's marble exterior began to crumble, sending large chunks crashing to the street. The city responded by wrapping the building together with 5,000 fiberglass straps and hundreds of padlocks, which hummed when the wind blew hard enough. The straps remained in place for eight years, until the building underwent a $21.2 million facelift in 2003.