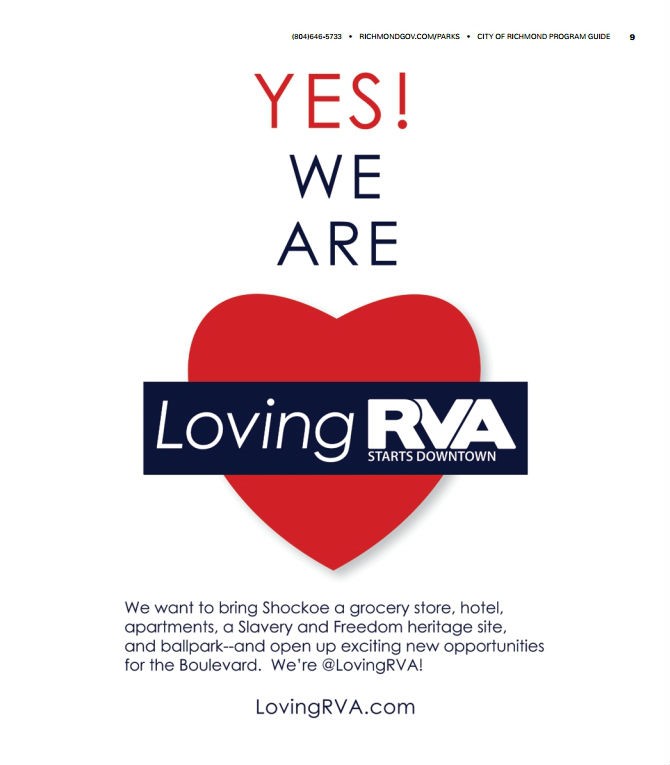 The advertisement directs readers of the parks department’s winter and spring publication to LovingRVA.com, a pro-stadium campaign sponsored by Venture Richmond, a downtown booster group that’s been working with Jones to build support for his controversial proposal to locate a new ballpark in Shockoe Bottom.

Jones’ press secretary, Tammy Hawley, said in an email that she personally placed that advertisement on a page that would have otherwise been left blank when an ad promoting the city’s partnership with Bon Secours on the Redskins training camp fell through.

“I thought it [was a] good use to help inform the public of where they could go for more information on the plan,” Hawley said. “We have directed the public to LovingRVA.com at all of our public meetings and in all of our presentation as well.”

But like Samuels, 5th District Councilman Parker Agelasto said he's concerned the ad appears to constitute a use of taxpayer resources to promote one side of the stadium debate.

Hawley said that’s not the case.

“The public has asked to be included in this matter over and over again and my efforts were to ensure that the public knew where to find more information; precisely what they've been asking for,” Hawley said. “I guess for me I would liken it to when we put our budget forward, we promote and educate the public about our proposed budget even as it is met with opposing ideas and opposing priorities. It's still city business that the public should have information about.”

Jack Berry, the director of Venture Richmond, told City Council last week that his organization has spent $32,500 on the LovingRVA campaign. He said the organization is covering the expense with donations from local businesses that support the plan. In addition to the website, which invites visitors to sign a petition encouraging City Council to support the plan, the nonprofit has recently been placing web and print advertisements, including in Style Weekly.

While Samuels said he’s looking into the legality of the placement in the park’s guide, 3rd District Councilman Chris Hilbert says that no matter what it sets a bad precedent.

“Regardless of the legality of it we need to be prudent about doing things like that in city publications,” he said.”