City Bees: The Next Eco-Trend? 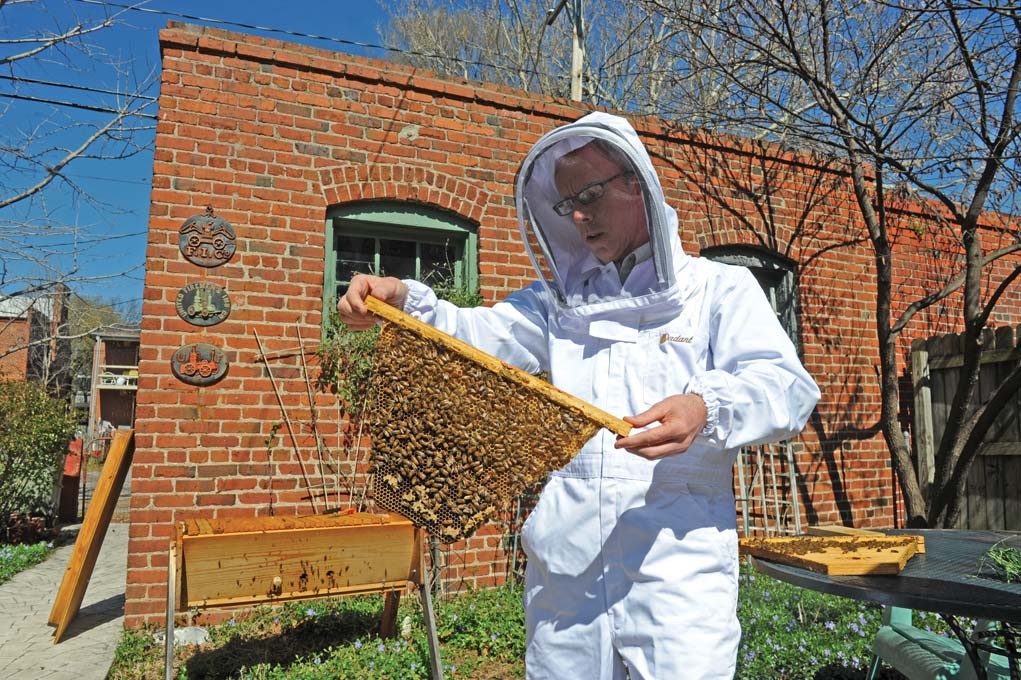 Chickens, schmickens. If you're a committed locavore, why not keep backyard bees?

That's what David Stover has done in his tiny Museum District garden for the last four years. On a recent balmy Thursday, his homemade hive hums while worker bees cruise in and out, wearing pantaloons of yellow pollen.

Stover, a photographer and aspiring backyard bee consultant, also maintains hives at friends' houses on Brook Road and Forest Hill Avenue, as well as one at Tricycle Gardens in Manchester.

Bees like living in the city, as far as Stover can tell — maybe even more than the country. For one thing, the varied yards, gardens and pots mean "there's much more diversity in what bees can forage on," he says. And the neighbors don't mind. "Unless you're messing with them, they don't mess with you," notes Helen Whitehead, who keeps the tidy garden next door.

Still, Stover's home hive can be a bit "ornery and mean," he warns. To prove him right, a guard bee jabs his hand. "First sting this year," Stover says, scraping the stinger from his flesh.

Last week, Stover's hive swarmed, an occurrence in which the old queen leaves the hive with her retinue to seek out a new home, while the young queen stays behind to rebuild the colony. The dense swarm landed in the neighbors' shrub — luckily, they didn't freak out — and Stover resettled it in a new hive at the garden at William Byrd Community House in Oregon Hill.

Keeping bees is easier than it looks. Stover's backyard bees reside in a Kenyan top-bar hive he made for around $60. He checks the hive every month or so to make sure the colony's thriving and that no nasty pests, such as wax moths and hive beetles, have invaded.

Why keep urban bees? It's not just a hobby. Stover, like many Virginia beekeepers, is deeply worried about colony collapse disorder, a little-understood malady that has been killing off honeybees for five years. The phenomenon has the potential to utterly disrupt the nation's food supply, according to ecologists, because bees pollinate almonds, apples, melons and other crops.

Stover's helping to bring a new film about colony collapse disorder, "Vanishing of the Bees," to Richmond on March 31. It'll be screened at the Science Museum of Virginia at 2 p.m. and 6:30 p.m. Admission is free and a discussion will follow.

Stover's encouraged by the way the city has embraced farmers' markets and community gardens, and thinks that for some people, beekeeping could be the next step. "The more people that can have bees in their backyard, or in the city, the better," he says.