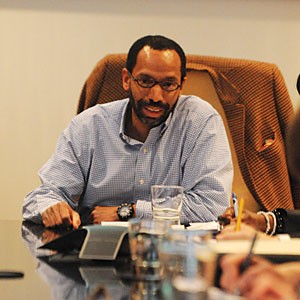 Amid talk of microloans for ailing businesses and funding for building facade improvements, Deputy Chief Administrative Officer Peter Chapman said that city code enforcement in the district will be “vigorous.”

The proposed 65-block district is dotted with 60- to 100-year-old buildings, some of which are “visually and statutorily” in violation of code, Chapman says. “Code enforcement can help identify those properties that are ripe for redevelopment,” he says.

It's unclear what that portends for the galleries that participate in the First Fridays Art Walks. Gallery owners clashed with the city over occupancy and building code restrictions in 2009, after the event began to draw thousands to a once-blighted section of Broad Street.
Christina Newton, director of Curated Culture, the nonprofit that manages and promotes First Fridays, says she expected some form of dActente from the new arts district. “There was an understanding that there could be some waiver of codes that could be applied to the district,” she says. “But in this plan, those benefits are nowhere to be seen.”

During the meeting Chapman assured that this proposal is simply the first step. An ordinance establishing the district was submitted to City Council for approval last week.