Officials say the 29 trees felled during a brush removal will be replaced. 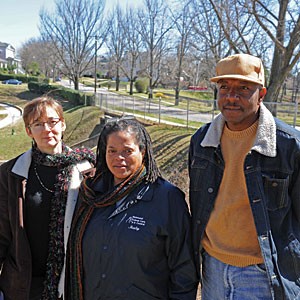 There were 29 of them. Dogwoods and other native trees mostly, growing wild among the brush on the hillside overlooking Battery Park in North Richmond. All that's left are a few scattered stumps.

The trees were “accidentally” cut down by a city work crew clearing brush last month, confirms Department of Public Works spokeswoman Sharon North. She declines to say whether the employees responsible have been disciplined.

Ginnie Morrow of the Friends of Battery Park says members of the group surveyed the damage after the trees were cut down. Many were no more than 5 to 6 inches in diameter, which means they were still maturing, she says.

The incident is especially unfortunate given the location, Morrow says. In 2006 the low-lying park disappeared under a torrent of water and sewage after from Hurricane Ernesto overwhelmed sewer pipelines there. In 2009 Morrow spearheaded an effort to plant seven new trees at the park.

Around $30 million in mostly federal funds was spent to improve the drainage and rehabilitate park infrastructure. But Battery Park's topography still makes it vulnerable to storms. Located on one of the steep hillsides that overlooks the tennis courts at the center of the park, the trees helped prevent soil erosion, Morrow says.

Elizabeth Barrett of the city's recently established Urban Forestry Commission says that while the incident is unfortunate, it “provides another opportunity to provide information to the administration and the public of the importance of urban forests.”

“We just want better coordination from the city,” Morrow says. “But they say they're going to make it right.”

The city plans to replace the trees, North says, but warm weather prohibits planting. So the department may have to delay until the fall. The city estimates the cost of the replacement trees at around $5,000.