The Richmond retailer's bankruptcy signals a new direction, but it may be too late. 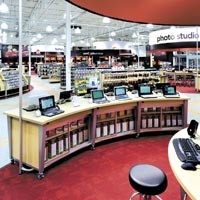 For months, big box electronics retailer Circuit City Stores teetered on like a chronic drunk, swaying from one bad decision to another. The firm slit its wrists by cashiering 3,400 top sales executives, leased bad store sites, and stubbornly played a weak catch-up game with its superior competitor, Best Buy. It hasn't turned a profit in two years.

The new question is whether the firm, whose Richmond roots stretch back to Wards Co. television store in 1949, can survive Chapter 11 bankruptcy. The firm filed for bankruptcy protection Nov. 10, facing more than $492 million in debts and the worst national financial crisis in decades. Trading its stock, last listed a 14 cents a share, has been suspended. Seventeen banks led by Bank of America have extended a lifeline loan of $1.1 billion to Circuit City as part of a bankruptcy deal.

By some accounts, however, the bankruptcy is evidence that Circuit City is serious about cleaning up its act. It was masterminded by the firm's new acting CEO, James A. Marcum, who had been put on the board after a bitter proxy fight and who has led turnarounds at Colorado-based Ultimate Electronics and Oregon's Hollywood Entertainment. Marcum replaced Phillip Schoonover who was cashiered two months ago.

“As far as bankruptcy, it is really 50-50,” Tom Arnold, a professor of business at the University of Richmond, says of the retailer's survival chances. “The question is how big they will be and whether they will grow to the size they were before.” Alan. L. Wurtzel, the son of the founder and CEO from 1966 to 1986, has a much tougher view. “Their chances of success? Slim to none. Better make that slim,” he says.

One thing going for the firm is that the bankruptcy means that it has come to a definitive turn after years of costly meandering. Its last big success was creating the innovative auto retailer CarMax, spun off in 2002. Since then, Circuit City, with revenues last year of $12.43 billion, has steadily spiraled downwards, taking its stock price with it.

What finally did Circuit City in was the freeze-up in commercial paper prompted by the financial crisis. As the holiday sales season approached, vendors of flat screen televisions and DVDs started shunning Circuit City. Under extreme credit pressure, they didn't want to see their precious wares trapped in stores that Circuit City might shut down suddenly. Marcum has announced that the firm will shut 155 stores of the 1,520 it operates in the U.S. and Canada and lay off 17 percent of its 46,000 workers. The firm owes $118.8 million to computer-maker Hewlett-Packard, $115.9 to television maker Samsung and $60 million to electronics maker Sony, among others.

The fallout is significant for the Richmond area. Last week, 700 workers at its headquarters near Gaskins Road in Henrico County were laid off and a bankruptcy lawyer says they may not be paid in the next two months. Circuit City has plenty of company: 1,200 layoffs at silicon-chip maker Qimonda; perhaps the entire staff at LandAmerica which is being bought out by a Florida firm; and new layoffs were just announced at cigarette giant Altria Group.

The mood was glum the other day at Circuit City's partly empty parking lot near its two headquarters buildings. Several workers politely declined comment as a Henrico policeman in a squad car, hidden behind green bushes, kept watch.

Peter Galuszka is a freelance journalist living in Chesterfield. He blogs daily on finance and corporate governance for bnet.com and is a regular contributor to Bacon's Rebellion. He's also has written for Corporate Board Member, Directorship, Chief Executive, Chartered Financial Analyst and Business North Carolina magazines.

He spent 15 years at Business Week, including stints as Moscow bureau chief and international news editor in New York.