A new bakery’s success reflects the revitalization of Hopewell’s downtown. 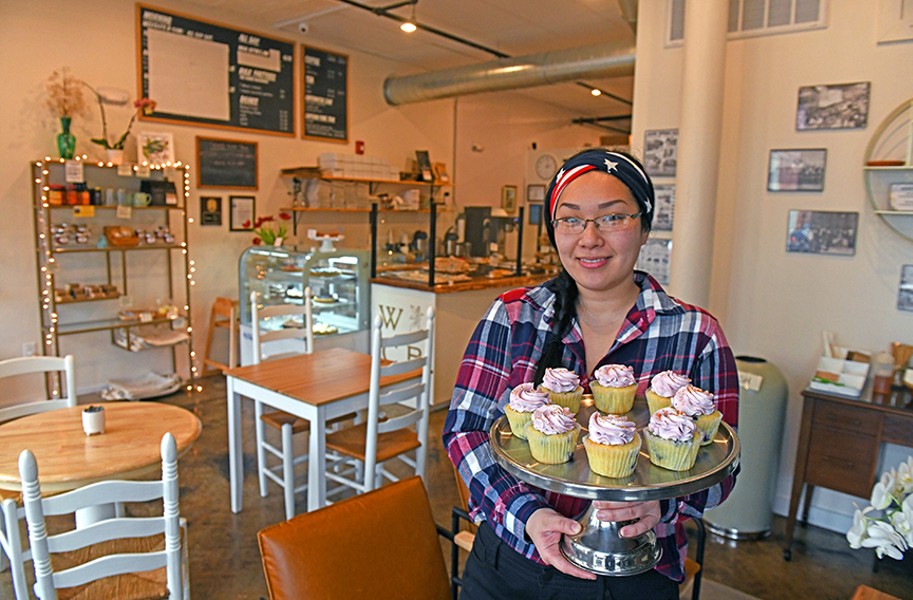 Scott Elmquist Trish Honaker is the owner of the popular Wonder City Bakery in Hopewell, which has been helping restore life to its Main Street.

Trish Honaker never envisioned a career as a baker. The first cupcakes she ever made were admittedly “a total disaster.”

But the first day her Wonder City Bakery officially opened to customers, the front door did not shut till closing. City councilors and state delegates waited with everyone else in a line that snaked out the door and down the block, eagerly anticipating the homemade flavors of owner Trish Honaker’s famously delicious baked goods. Within hours Wonder City Bakery had sold out of 300 cinnamon rolls, 250 cookies, 1,000 doughnut holes and countless other items. Honaker prepared expecting her wares to last all day.

Not one to shy away from a challenge, Honaker became obsessed with food blogs while studying at the University of Virginia and eventually started her own: Virginia Food Head. During the stressful first phase of her law career, baking served as a form of therapy, a time to unwind and explore her creativity.

An invitation from Guncotton Coffee & Gallery — a nonprofit cafe in downtown Hopewell — provided Honaker her first big break to sell her goods commercially. Customers snapped up her pastries, muffins and brownies with such gusto that her dream of baking full-time suddenly began to feel less far-fetched.

After a stint working under David Rohrer in his Church Hill and Southside WPA Bakeries, Honaker bought 50 cake pans, secured 245 E. Broadway Ave. as her storefront, and set about turning her passion into a profession despite no culinary training. At first people questioned her decision to locate in Hopewell. For Honaker and her husband, a Hopewell native, the move was a no-brainer.

“We saw that the community down here is flourishing,” she says. “People are recognizing Hopewell has a lot of potential since it’s rich in history and right on the water. This is an up and coming town.”

With the assistance of the Hopewell Downtown Partnership, Wonder City Bakery joined a suite of other small businesses restoring life to a long neglected main street including Roja Taco Joint, Saucy’s Sit-Down Bar.B.Q. and Haley’s Honey Meadery. The success of Hopewell’s newest business reflects a wave of revitalization sweeping the city’s historic center. With new apartments and two breweries on the way, the downtown seems to have reached a turning point. Whereas locals once rallied around the unofficial motto of “We’re trying,” today whispers of Hopewell as the “Carytown of the Tri-Cities” abound.

Wonder City Bakery lives up to the reputation. Everything Honaker sells is made fresh and from scratch daily. The shop also offers a few gluten-free options each day such as Earl Grey macarons or a lemon thyme cheesecake with a scratch-made lemon curd. Honaker executes classic American comfort foods with a creativity that always feels inviting.

“We like to ease people in with something they’re familiar with but also introduce a new flavor. We want to bridge the gap between convention and innovation,” Honaker explains, noting the bakery offers cheddar, black pepper and caramelized onion biscuits and sausage gravy with meat from Dockery Branch Farms in South Hill. “Our cinnamon rolls are so scrumptious because we make them with a brioche dough. Chocolate chip cookies with Maldon sea salt are a bit unexpected from a bakery down here.”

The waiting list for her decadent custom cakes is a testament to her prowess. Her signature Hopewell Mess, a riff on the Eton Mess from the United Kingdom, mixes cake scraps, fillings and frostings to create a highly popular parfait with flavors ranging from chocolate salted caramel to raspberry lemon curd.

With business booming, Honaker is even considering offering a few lunch specials to honor her Korean heritage. Whether it’s a pimento cheese with kimchi or. bulgogi steak and cheese, she toys with the idea of a menu that fully reflects her family: a happy mix of Southern and Korean.

At Wonder City Bakery a jar of yuja (Korean Citron) tea sits comfortably next to a bag of Blanchard’s coffee. This ability to combine flavors with American classics is the recipe behind what makes Honaker’s baked goods so beloved. Her emphasis on taking the best parts of the old and the new to create something welcoming and exciting feels right at home in Hopewell.