The artist known as Snow Panda likes it loud and remixed. 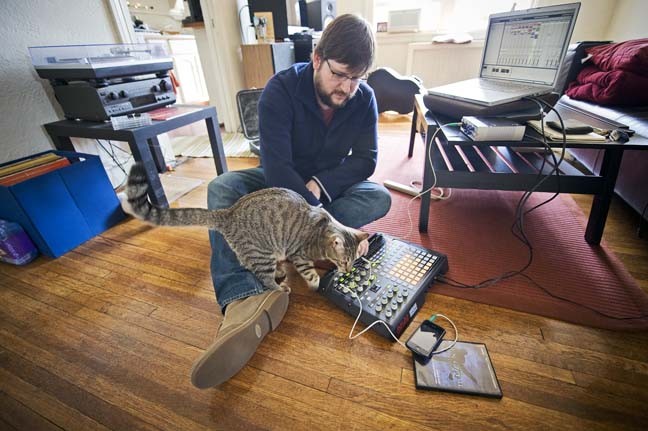 Gabe Churray, aka Snow Panda, has been the opposite of a frontman. Onstage with his keyboard and MacBook, sculpting sonic landscapes for alternative rock band Ilad, he is more presence than performer. As a canny remix artist, he burrows into others' works, reshaping them from the inside. As a disc jockey, he rarely plays his own tunes, maybe inserting one late in a set, counting it a success because the crowd keeps dancing.

Now Churray is stepping from the shadows at the back of the stage for a shot at the featured role. He's released the all-original "14 Woodblock Prints," and is performing the complete album accompanied by Ilad drummer Scott Clark at Balliceaux on March 30.

"I was inspired by the woodblock prints at the Virginia Museum of Fine Arts,' Churray says over a Thai lunch in Carytown. The tracks are brief — none more than four minutes long — with multilayered electronic lines weaving over a skeletal rhythm intermixed with organic elements: bird song, snatches of conversations and distant sounds. "My pieces are miniatures, more acoustic than electronic, meant to be absorbed really fast."  Much of the raw material is drawn from the growing catalog of found sounds recorded with his ever-present iPhone. "The sound is all there," he says. "All you have to do is arrange it so it sounds good."

The eclectic repurposing of accidental content permeates Churray's approach down to his nom de plume. A few years ago he joked about a particularly lame and pretentious DJ "he probably calls himself something terrible like 'Snow Panda.'"  On reflection, especially considering the graphic possibilities, the name didn't seem so terrible.

Churray's comfort with change and chance seems to stem from his ricocheting musical trajectory. Starting on violin at age 3, Churray wanted to play drums, but his middle school band needed trombone players. He stayed with that horn through college, playing summers with the Busch Garden Boogie Band until his graduation in 2003 from James Madison University, with a master's in music theory and composition. He was almost resigned to years of high-paying but uninspired cruise ship performances ("When you've played Ligeti and Penderecki it is hard to get excited about a big-band version of 'La Bamba.'") Then a former college friend, Clifton McDaniel, asked him to move to Richmond to form Ilad.

The band —  with McDaniel on guitar, Cameron Ralston on bass, Scott Clark on drums, and Churray on keyboard and electronics — provided the scope for composition, and an opportunity to explore the dark, synthesized (and extensively re-edited) frontiers opened by Miles Davis. Early 2004 was an ideal time to arrive in Richmond, the heyday of the Patchwork Collective, an initiative founded on creativity and inclusion. This opened the door for Churray's cross-pollinating collaboration, notably his Snow Panda remixes for other local bands.

The first, for Brian Jones, was constrained by source material, mixed recordings rather than individual instrumental tracks.

"It took me almost a year," Churray says. "All I could do is chop them up, slow them down, speed them up, put them back together."  Later he did the same for Ombak's first CD, and then tracks for Fight the Big Bull and David Karsten Daniels, among others.  He received an honorable mention in a high-visibility global competition remixing a recording by one of his heroes, minimalist composer Steve Reich.

There is a world of difference between the introverted assembly of digital components in a quiet studio and its extroverted realization in front of a rollicking club. The subheading of Churray's website, at snowpanda.com, is "best listened to with headphones." He hopes to get a similar immersive effect using Balliceaux's rear speakers to create a surround-sound environment.  "Right now," he says, "I think it would be cool to hear it really loud." S

Snow Panda and Josh Small Band will appear live at Balliceaux, 203 N. Lombardy St., on March 30 at 10 p.m. Admission is $5. For information go to balliceauxrva.com.