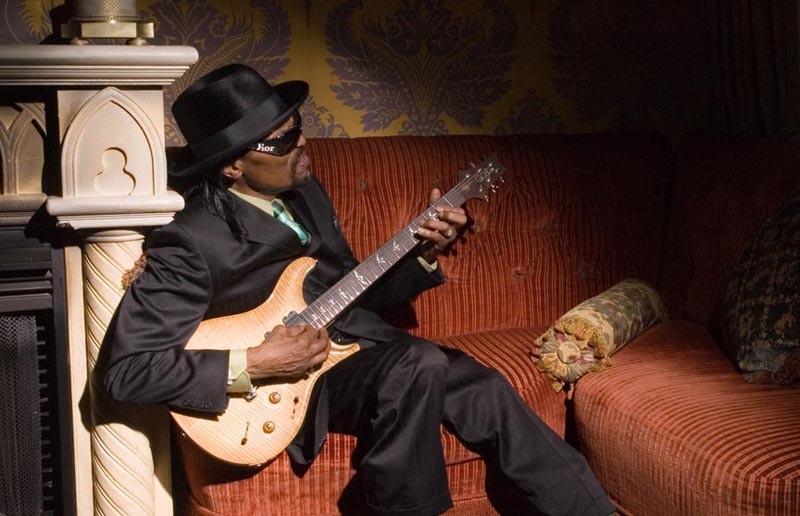 Chuck Brown belongs to Washington. The septuagenarian spent some of his formative years in the nation's capital, and it's where he created go-go, a musical style heavy on percussion and crowd participation. But that isn't the only city that helped the man known as the godfather become the regional icon he is today. And it doesn't have an island to name after him either.

Brown's story, from being the son a chicken thief, to the chain gang, to musical pioneer starts in Gastonia, N.C. in 1936. After the death of his father, his family went wherever there was work, which led him to rural areas of Virginia, places with names such as Mechanicsville, McKinney and Alberta. Eventually it came to Richmond, where the young Brown found a home and a little trouble.

Style: Where did the term go-go come from?

Chuck Brown: Well, I’ll tell ya. Go-go, the term itself … the music was inspired by African and Latin music. Go-go came from me, I started to call the music go-go, because they had go-go clubs and go-go girls, and go-go dances and all you know, and this new concept of music I created, I decided to call that go-go music because we don’t stop anymore. We used to do maybe 15, 20 songs a night, we used to do four or five ballads, you know, slow songs. Had to sound like a radio, back in the day. If you didn’t do James Brown you wouldn’t get a gig no more, you wouldn’t get that gig no more.

Then you had disco out there you know, we did a lot of disco. I decided to call it go-go after we stopped doing slow songs, ballads, which I hated to do. I never wanted to stop doing ballads. That’s when we started playing this stuff, and it just goes and goes. We don’t stop. Don’t stop till the end of the night till the gig is over. And it’s stopped people from wearing those mink coats. [laughs] I just decided to call it go-go. We just go and go. We don’t stop until the night is finished.

Could you talk about Grover Washington’s song “Mr. Magic.”

That song, that particular beat… it was real fast, the church beat. Grover Washington came out with “Mr. Magic” and it was slower. I recognized it and I felt that spiritual vibe, and I decided to adopt that, syncopate it and turn it around different ways. And use it. That’s what happened.

How many shows do you do a year?

It’s kind of hard to say. My manager can tell you that. I do hundreds of shows a year. I can’t count. Back in the day when we were doing top 40, we did like 250 shows a year, sometimes 300 shows in one year. Sometimes, at one point, back about 35, 40 years ago, we worked seven nights a week, sometimes double gigs on weekends. Two gigs on Saturday, two on Friday.

Are there times when you don’t feel like bustin’ loose?

I hit that stage, I’m on the right page, I become enraged, I forget about my age. [laughs] That’s the thing, you understand? The minute I hit that stage, I’m OK. There may have been times, you know at my age, I’ve come out the house and didn’t feel like it. But I’m always motivated to play. I don’t look at playing music as work. That’s the habit some people got of callin’ it work. It’s too enjoyable to be called work. When I come to play, I come to play. When I come to work. … I ain’t got no job, I don’t have no day job no more. I ain’t had a day job in over 40 years. I thank God for that.

What was your last day job?

I was a bricklayer. I’m an ex-brick apprentice. I drove a tractor and trailer. I worked all down in Richmond, I picked cotton, I done done it all. I done dug ditches, done set railroad tiles, I done worked in the sawmill, I done work in the log woods, I done worked everywhere, you know.

I saw you do a show in Richmond and you called out some of the neighborhoods and addresses where you had lived.

Exactly. I can give you every address I ever lived at in Richmond from the time I was 4 years old. Hello! 4 years old. I can give you every town I lived in. When my mother first left home with me in her arms. My mother left home when I was six months old. I never seen my daddy, he died before I was a year old. He had a lot of children around and they tell me he used to steal a lot of chickens. Carry a chicken to each house where he had a child at.

[My mother] got a live-in job as a maid. She took care of me that way. Then she left there and came to Emporia, Va., and she met my stepfather there. He got stabbed or killed or something, some kind of skin game, I was a baby, I don’t know what happened.

At the concert, you mentioned you spent some time on Spring Street.

You know, God is good. Back in those [days] when I was workin’ them chain gangs, I helped build these highways. [I said] ‘one of these days I’m going to be driving my fancy car through these highways.’ And sho’ nuff it all came true, you know. My kid’s in college up there, one’s in college. I’m so proud of them.

I didn’t know that.

I noticed you always wear a hat. What is it you like about hats?

I love hats. I’ve been wearing hats since I was big enough to get one on my head. Since the 1940s. I stop wearing them for a number of years, but I like wearing my hats now, it’s my image and on top of that, I’m bald-headed. Gettin’ bald. I don’t mind that. I thank God for that. The only thing worse than getting’ old is not getting old.

The hat is my image, you know. I love wearin’ hats. When I was little kid, I used to go in Thalhimers, Miller & Rhoads, used to steal hats out of there. [laughs] I used to steal hats out of there when I was a kid. Yes, indeed. I always loved hats. Especially cowboy hats, I wore cowboy hats for years, had a snake on top of it. You didn’t see that one did you?

No, I haven’t seen that.

Yeah, I love cowboy hats and cowboy boots. I love ‘em. Right now I just wear the cowboy boots. I been wearing them for years. My kids buy all my clothes for me. My wife and my kids. ‘Cause If I bought all my own clothes, I’d be looking like the ‘bama of the week.

Given all that you done, Is there anything left that you want to do, any goals that you have left?

You know, God is good, let me tell you something. When I was 5, 6 and 7 years old, I was runnin’ up and down the street with some more little raggedy boys that look like me. With some more little homeless-looking boys like me, had strings holdin’ their clothes up on ‘em, down there in Richmond, Va. You know I prayed then, when I was little, I said, “Lord, when I get big, and get me some children, please don’t let my children look like me, ‘shamed to go to school.” My parents were very poor, you know. This was back during the war. It’s nobody’s fault we were all poor, you know what I mean? I said, “Lord, please let me be able to give my kids a better life then what my parents were able to give me.” He answered my prayers, you know? He answered my prayers.

I quit school in eighth grade. I prayed for my kids to have the opportunity to go to college. It all came true. You follow what I’m sayin’? Everything that I have prayed for, came true. Everything. That’s the most amazing thing in my life, that I look back and I see that everything, that I asked God to do for me, he did it. I don’t only pray for myself, I pray for others. Always pray for other people.

Are you working on a new album?

Well, you know, I’m a jazz and blues gospel artist. Course, I couldn’t make no money doin’ that. [laughs] I couldn’t eat. But I created that go-go, I can eat and everybody that plays go-go can eat. You follow me?

That’s a wonderful thing that …. When I look and see that, it just really gets to me when I see a young band comin’ out here, playing go-go music, stayin’ out of trouble. You don’t have to be no great artist to play go-go music. It’s about the feel and you learn as you go along. Go-go is nothin’ but another form of funky music, mixed with African, Latin, and your fans’ call and response.

Chuck Brown plays at Kanawha Plaza, Eighth and Canal streets, as part of Fridays at Sunset on July 22 at 6 p.m. Tickets are $20. For information, go to fridaysatsunset.com.