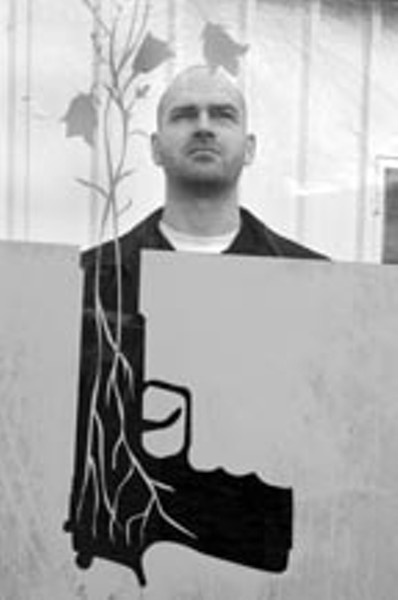 When Humes moved to town from San Francisco in 2002, it wasn't long before he jumped into Richmond's art scene. Coming from a family of self-starters — Humes' brother Pete started the former Punchline magazine — Chris Humes opened Three Miles Gallery on Broad Street. The gallery didn't last long, but Humes kept one foot in the art world while picking up a job designing at Cornerstone Architects. Next, he and activist/graphic designer Noah Scalin collaborated on a traveling installation exhibit to draw attention to gun violence in Richmond. Their growing show, "Swords Into Plowshares," consists of 94 guns, shaped out of clay and seeds, each representing a homicide victim in the city in 2004.

Humes recently helped form AKA, a group of architects, artists and other design professionals. The group plans to sponsor competitions and curate art shows to be displayed at the First Fridays Artwalk. Since they don't have a space, the group's first competition was to design a mobile gallery. After sifting through entries from as far away as London, Chicago and Milan, 12 finalists' entries were displayed at the Artwalk in December. Two hundred and fifty people cast votes for their favorite plan.

Humes, who says he's not moved by any of the "self-indulgent crap" showing at local galleries, is moved by the plan to bring new ideas to First Fridays. "Think about 250 people voting on something to better their city. We have the outlet, let's turn it up," he says, suggesting that AKA may address local problems this way, problems like where to put a baseball stadium. The best part is that the suggestions will be coming from across the country and the world, he says.

What's next: "Swords Into Plowshares" will make another appearance at the Creative Change Center, C3, Feb. 5 with an overview of the project and roundtable discussion from 4 to 7 p.m. AKA's spring competition is looking for proposals on how to transport the queen of England through town during her visit in 2007. For information, go to www.akaconnect.net. Humes says his next exhibit will be something completely different. He's working on ideas for a solo show in the fall. — Carrie Nieman