The tour of Maymont Mansion is incomplete without going downstairs.

If you leave a holiday tour of Richmond's Maymont Mansion with simply "ooohs" and "ahhhs," chances are you've only seen half of the late-19th- and early-20th-century Christmas story.

The above-stairs story of millionaires James and Sallie Dooley, for whom the 12,000-square-foot Maymont was home from 1893 to 1925, includes 13 restored interiors of fine woodwork, stained glass and other opulent detailing, accented by the fresh greens and elegant holiday trim for which wealthy Victorian homes were known.

But for the rest of the story, enter the mansion's downstairs entrance. There, you'll see the complex support system from which servants operated in eight rooms, not including three rooms closed to the public, such as the brick-lined closet for drying laundry.

The simplicity of the downstairs environment — devoid of festive garlands and design contrivances seen in the wealthy upstairs world of extravagant entertaining — offers visual and gustatory appeal of its own during this season. Glazed Virginia ham and cooked turkey await the carving knife on the kitchen's work table, cranberries stew for sauce in a pot on the stove, a cake is decorated with red and green icing to form holly and gingerbread men on a cookie sheet emerging from the oven. Near the holiday comfort food sits a wooden box with a large, black doll, which silently speaks of emotional comfort to a child working 10-12 hours a day to sustain the world two floors above his or her head.

The original owner of the doll is Doris Walker Woodson, born in 1929. She's the granddaughter of Maymont's head cook from 1919 to 1925, and granddaughter of the cook's assistant employed at Maymont from 1920 to 1925. She donated to Maymont and is a major player in the downstairs exhibition, "In Service and Beyond: Domestic Work and Life in a Gilded Age Mansion," which opened in July 2005 to the acclaim of the National Endowment for the Humanities.

"Doris was a vital part of the formation and interpretation of the exhibit from the beginning — and it was a decade in the making," says Dale Wheary, Maymont's curator and director of interpretation and historical programs. "She has been the outreach coordinator taking the message of the exhibit throughout central Virginia." 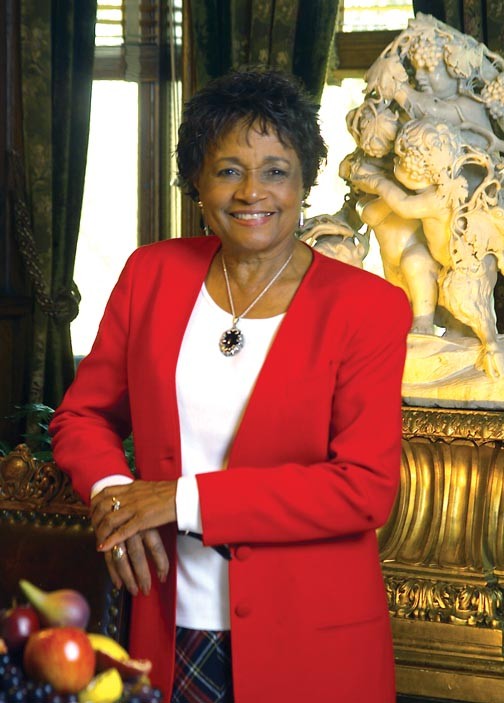 As a small child, Woodson's holidays weren't ones of visiting Santa at Miller & Rhoads. Today she remains a generous spirit who prefers to talk in third-person about Maymont as opposed to talking about her own life. After a 35-year college teaching career in art, she readily identifies with the framed scene in a downstairs hallway, "Christmas," painted by Palmer Hayden. It depicts a black father at home with his children beside a modest Christmas tree when the children's mother was away fixing someone else's Christmas dinner. Woodson's mother, Frances Walker, was never at home for Christmas. She never had a home, in fact, as she "lived-in" at Maymont and in Philadelphia, where she moved when Doris was an infant — part of the great migration of blacks with the institution of Jim Crow laws in the South, to major cities elsewhere in the country in search of a better life. Woodson saw her mother on her days off on Thursday afternoons — unless that happened to be Christmas — and sometimes on Sundays.

When asked about the movie "The Help" and the television series "Downton Abbey," Woodson says she saw the former but doesn't watch the latter. "I don't enjoy watching those shows," she says. "They're really disturbing — like ..." Her voice trails off, her hands making the visual motion in her lap of turning a screw.

Despite a life of limited opportunity, Woodson's mother made $25 monthly payments to send her daughter to St. Francis de Sales boarding school in Powhatan County. Woodson went on to graduate from Xavier University and from Virginia Commonwealth University, where she became the first black student to earn a master of fine arts degree.

Framed biographies of Woodson's family members who served Maymont hang in the downstairs exhibit open during the same hours as the rest of the mansion. And the book, "From Morning to Night," by Elizabeth O'Leary — with a black-and-white reproduction of a painting by Woodson in the front — is in the museum gift shop. S