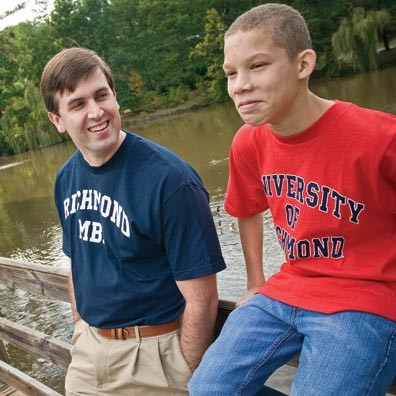 At 17, Chris Johnson was itching to join the army. Instead of taking the summer off and spending it with friends after his junior year in high school, he enlisted. He can’t explain it.

“I struggle with that one,” he says.

After basic training at Fort Jackson, S.C., in the Virginia Army National Guard, he graduated and enrolled at James Madison University. In 2005 he was deployed to Abu Ghraib in Iraq.

“We got mortared or rocketed more than 300 times while we were there,” he says.

He survived in one piece and landed a job at CarMax. He joined Big Brothers and Big Sisters of Richmond where he met Kaleb, a boy who lives with his mother, twin sister and older brother in a trailer park. Kaleb, now 13, was shy and struggled in school.

“If you take him out to eat, he was kind of scared to ask for a simple refill of a drink,” Johnson says. “And now he’s totally different.”

Johnson, now a financial analyst at Genworth, also is working on his master’s degree in business administration at the University of Richmond, where he and a small group of veterans organized a 5-kilkometer run in March to benefit widows of fallen soldiers.

Last school year, he picked up another little brother, Xavier, who’s 8, and joined the nonprofit’s board. He was named the 2010 Big Brother of the Year.

He finds that it’s the little things, the little moments. Xavier loves to play Uno, the card game. During their first lunch after the summer break earlier this month, Xavier beamed. He just couldn’t wait for a rematch. “And then for the first time we went outside and threw the football,” Johnson says. “We threw the ball until he had to go to gym.”