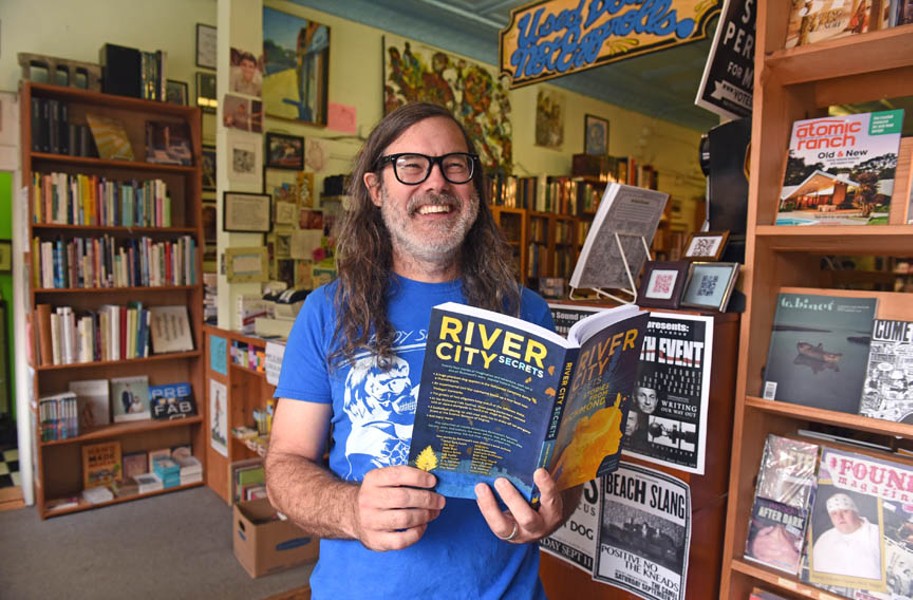 This month it releases its second and third books — one visual and one literary. Owner Ward Tefft says publishing books is a natural culmination of professional relationships with local artists during the store’s 14 and a half years.

“We’re kind of flying by the seat of our pants. We don’t have a plan,” Tefft says. “What we have going for us is a lot of pluck and a lot of love for the things we’re doing.”

Writing recently for Literary Hub, Richmond novelist Jon Sealy noted the trend of small, independent presses opening bookstores, focusing on their own books. If these ideas were hatched in corporate boardrooms, they’d be called vertical integration.

“We’re not doing it as a business venture so much,” Tefft says. “We just finished paying for Noah’s book that we made over two years ago.”

That’s local artist Noah Scalin’s “Skull-a-Day,” Chop Suey Books’ first foray into publishing. “We did a run of 3,000 and we’ve sold over half, but we just kind of made that number up.”

Another book coming out in October, Shelley Briggs Callahan’s “The House of Life,” rounds out a busy season for Tefft. He laughs at the suggestion of keeping up this publishing pace next year. “I’d have a sort of different business if I did that,” he says. But stay tuned for a spring release, too.

So about those two current releases: Lana Krumwiede had written three novels for a middle-school audience and a picture book, but recently had something a little different on her hands: 24 Richmond stories by 18 authors. They were inspired by short-story collections “Richmond Noir” (2010) and “Richmond Macabre” (2011).

"I thought it was a cool idea to have short stories that take place in RVA," she says. “But both [collections are] very adult. I would not give either to a kid.”

It was a sentiment shared by fellow authors in the Richmond Children’s Writers club, and “River City Secrets: Stories From Richmond” was born. They divvied up such local spots as Maymont, Belle Isle, Agecroft Hall and Jackson Ward to write about.

Krumwiede asked Tefft for a suggested publisher and he jumped at the chance to publish it himself.

“It stands for me for the new South, a book where Confederates aren’t sympathized with and civil rights are directly addressed,” Tefft says. “It challenges notions of the more conservative Richmond.”

Krumwiede thinks the stories will be a favorite for teachers looking to complement field trips or history lessons. “For young readers it’s important for them to connect to a story,” she says. “What better way than a setting they know really well?”

But adults will enjoy them too. “We tried to pick places people knew but also things people don’t really know about Richmond,” she says. “Secrets.”

Some years ago, in that time-honored tradition, Chuck Scalin googled himself. After a few pages of results from galleries and exhibitions, the artist came upon a rare books site. “I thought, what on earth?” he recalls. “How am I associated with that? I went to it, and it listed the book and all the artists. It indicated all the awards and honors and exhibits that all these people collected later. The price was $850.”

It was a coloring book that Scalin and his fellow up-and-coming artists published in 1969 in a summer of boredom. It sold for $3 at the time.

“I thought, maybe now is the time to maybe do another coloring book,” he says.

“Artists Coloring Book: Volume 2” is the second Scalin collection of colorable drawings by Richmond artists. In 2014 he created one for an Art 180 fundraiser, but this time Chop Suey Books Books has stepped up to publish it. Scalin is Noah’s father, and has known Tefft for many years.

“It’s become very popular in the last two or three years. It’s very relaxing to color within the lines,” Scalin says of the resurgence of adult coloring books. “Though with this one, you don’t have to color in-between the lines. Let loose.”

The book features artists of various backgrounds: painters, sculptors, printmakers, collage artists and muralists. “It was exciting for me to see how each artist solved the problem of the one-color limitation for their work and to see the variety of mediums they chose,” Scalin says. “This is a Richmond coloring book.” (Style senior contributing editor Edwin Slipek wrote the foreward.)

It might not ever be worth $850, but Scalin and Tefft printed 500 and expect them to go quickly. “For the last coloring book, people were purchasing two,” Scalin says. “One for their grandchildren to color and one to keep pristine.” S