The University of Richmond’s new president, Ronald Crutcher, on community involvement, love for the cello and his inaugural year ahead. 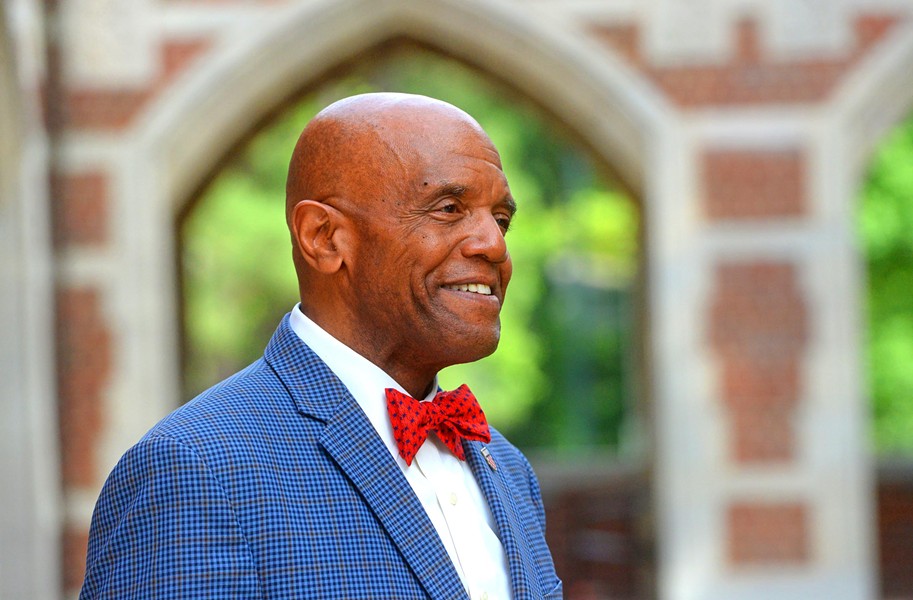 Scott Elmquist Ronald Crutcher’s first day as UR president was July 1. He replaces Ed Ayers, who will return to teaching after a year’s sabbatical.

Empty bookcases cover an entire wall of Ronald A. Crutcher’s office. The University of Richmond’s new president, dressed in a natty bow tie, is so new that he’s arrived before his books.

Crutcher, the former president of Wheaton College in Massachusetts, was named the 10th president of the private, 185-year-old university in February. He began his first day at the helm of UR on July 1.

He’s also a prominent cellist, with doctorate and master’s degrees in music from Yale University. He’s served on the board of orchestras in Boston, Cincinnati and Cleveland and also has taught or been an administrator at the University of Texas at Austin, the Cleveland Institute of Music and the University of North Carolina at Greensboro.

While heading Wheaton for 10 years, he was credited with growing its finances. At Richmond, he replaces Edward Ayers, a Civil War scholar who will remain on the university’s faculty. Crutcher will be inaugurated Oct. 30, after the class of 2019 has settled into its first couple of months on campus.

Style: What do you want to do at the University of Richmond?

Crutcher: One of the attractions to Richmond is its commitment to be a need-blind tuition funding school, which is critical in my estimation. It is one of the fewer than 40 universities in the U.S. that is committed to providing 100-percent funding of students whose families make less than $60,000 a year. Accessibility and affordability are dear to my heart.

Why is this so?

You don’t want to have a bifurcated system where quality education is provided only to higher-income families and those from lower-middle- and lower-[income] families end up with everything else.

What percentage of the total student body benefits from the program?

It’s very small, like 2 percent. It seems lower than it should be but there could be reasons for that.

You had some successes at Wheaton at fundraising. What techniques worked?

If you do a campaign, you want to exceed your goal. At Wheaton, we had a goal of $120 million when we started out the campaign. The final amount was $137.6 million.

How did you do it?

We engaged a lot of folks. It’s really developing relationships with folks. You are on the road. You visit with them and gain their trust.

Richmond has benefitted from a number of wealthy families in this area, such as the Robins and Weinstein families, but they are growing older. What can you do to develop new sources of revenue?

Richmond has been incredibly fortunate to have had those families, but even before my coming here, we had a goal of $115 million and ended with $172 million. During that campaign, we were able to engage 45 percent of all undergraduate students and 18,000 of our alums.

You are obviously an accomplished musician, a cellist. How will that background in music help you do here?

It’s not just my background in music, it’s the type of music I do. My area of focus is chamber music. You have to work collaboratively for a collective performance. I’m a great listener, I am a poly-phonic listener, I can listen to more than one conversation at a time. It’s very useful at a cocktail party.

That must come in handy when you’re fundraising.

When I’m leading, I know when to lay back and let other people talk as opposed to asserting myself.

Eventually. Not during the first year.

Have you had any association with Richmond music groups like the Richmond Symphony?

Yes I have. It just happens that Steven Smith, the music director of the Richmond Symphony, was one of my advisees when I was vice president and dean at the Cleveland Institute of Music. He had come back to get his second master’s degree. I have agreed to be on the board.

Richmond has made initiatives with downtown campus. What do you see about expanding UR’s presence?

The expansion of Richmond downtown was something that I found really intriguing. It’s absolutely the right thing to do. I had a meeting yesterday with Mayor [Dwight] Jones on my second day on the job. … I am very, very interested in the school system.

UR has excellent liberal arts, law and business schools, but it isn’t known for research. Would you try to change this?

Science-minded students apply here because they can get the same quality of education experience with access to research tools but also get more faculty attention.

We’ve had quite of storm of protest in Virginia triggered by the now-discredited Rolling Stone article on an alleged rape at the University of Virginia and binge drinking. What is your view?

That whole issue of sexual assault and alcoholism is right up there in the top five of challenges. Richmond was really in the forefront of developing programs to better educate our students about sexual assault and there are a number of initiatives.

What about some controversies on campus about sports — eliminating men’s track and soccer and adding lacrosse?

The decision to do some alignment was made before me. As far as I can tell, it was a thoughtful one. Scholar-athletes learn a great deal about leadership, life and how to manage multiple priorities through their participating in athletics.

That’s a terrible question. If I were forced to say one composer, it would have to be Brahms. S

Editor's note: In the print version of this story, we misreported "need-based" rather than "need-blind."