Paul A. Levengood refers to departure as a "yearlong sabbatical." 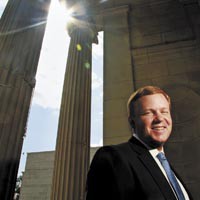 The Virginia Historical Society is losing its president and chief executive.

Paul A. Levengood, credited with overseeing a major renovation project and bringing innovative exhibits to the Museum District organization, has told the society’s board of visitors that he will resign effective July 1 to pursue history projects.

“I have come to realize that my true passion lies in the study of history and in teaching the lessons to others,” he wrote in his resignation letter. “I feel that I must now take the opportunity to pursue the passion or always regret not taking that chance.”

In his letter, Levengood also referred to his resignation as a “yearlong sabbatical” although Style was unable to determine whether he will return to his post. Neither Levengood nor a society spokesperson could be reached for comment.

Board Chairman John R. Nelson said in a release, “We will all miss Paul, but we understand his decision and respect his wishes.”

Levengood became head of the society in 2008 and has been credited with overseeing renovating the museum on the Boulevard and raise $46 million in a capital campaign. He was one of Style's Top 40 Under 40 recipients in 2008.

Another is Gridiron Glory, an exhibit related to professional football created by the Pro Football Hall of Fame in Canton, Ohio. It runs through Sept. 4. Other exhibits have dealt with such diverse topics as school desegregation in Virginia and Virginia-born country music star Patsy Cline.

Levengood, a native of Philadelphia, has a bachelor’s degree from Davidson College and a master’s degree and doctorate from Rice University. He started to work for the society in 2000 and took over as president and chief executive in 2008.