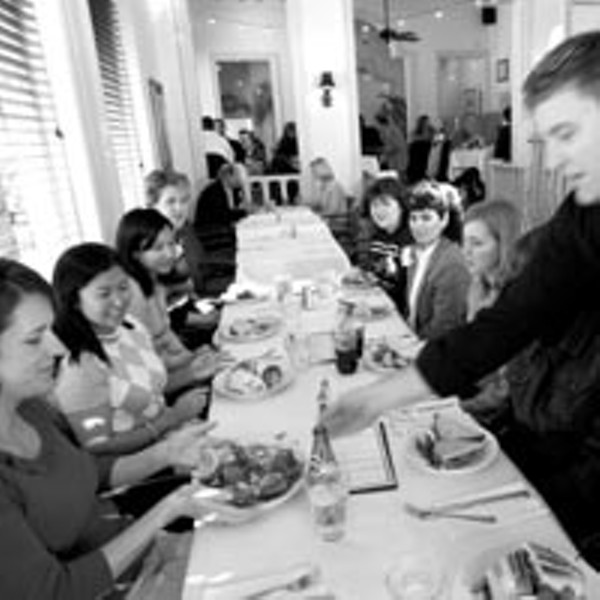 Owner Andrew Hardie, who learned the food business in his native Scotland, serves meals only at the lunch hour because he makes most of his money from a flourishing catering business in the evenings.

Hardie opened a small catering business and deli at the location 15 years ago and has expanded the spot over the years to where it now seats 75 to 80 people. And many days, especially when the restaurant hosts a bridal shower or other celebratory function, there is a wait for a table.

The crowd is eclectic — smartly dressed career women, soccer moms toasting a bride-to-be with mimosas, hard bodies straight from a workout at the nearby Y, men in business suits, men in leather, couples who may or may not be married, professorial types eating alone and perusing magazines from the wall rack.

What unites these blue staters and red staters is the food, which has a Mediterranean flair, and the setting, a classic 1920s building designed for a restaurant called the Cactus Grill. It later operated for many years as Claude's, but in between the restaurants, the building housed a paint store. When Hardie bought the building, he sandblasted the paint-of-the-week exterior and returned the facade to its original Western motif of gold stucco and Native American emblems, and he added red awnings.

The menu is light fare — soups, salads, sandwiches and a daily special or two — presented with a flair. The prices also are light, about half that of the Jefferson Hotel around the corner, and not that much more than Perly's, another venerable neighborhood spot a block away.

The menu includes such usual standbys as chicken and spinach salads, London broil, and turkey and ham sandwiches. The pimento cheese sandwich is made with shredded sharp cheddar, diced red peppers and onions in a piquant sauce. The tasty combination would have been even better if it hadn't been a little dry.

A fruit cup heavy on grapes kept the tarragon chicken salad from being similarly dry. The poached chicken breast was combined with toasted almonds, tarragon and celery in a Dijon mayonnaise sauce.

A tuna special also would have benefited from more moisture. The meat, seared on a grill, was a bit overcooked, giving it more of the flavor and consistency of swordfish than rare, delicate tuna. Yet it was pleasing, a generous portion of tuna topped with fennel, penne pasta, marinara sauce, Italian red peppers and a little balsamic vinegar.

There was nothing to complain about in another special, a bowl of fricassee consisting of well-done braised tenderloin tips, sweet potatoes, corn, avocado and pico de gallo.

Desserts, all made in-house, include a signature lemon-butter cake, in which a mound of sweet and slightly tart fresh lemon cream tops a crust of butter cake so thick it required a knife to cut. Apple cobbler was smothered with whipped cream, but by the time it reached the table, its once-fluffy curls had settled into an icing.

If you have to wait for a table, there is a small, ornate black bar at the front, topped by a chandelier and featuring a nude painting. Here champagne, wine and other libations can help pass the time.

Tables are placed in three small rooms. The service is professional, though on one visit someone emptied the coffee urn before closing time, giving two lingering parties the impression it was time to go.

Although Hardie doesn't offer dinner or weekend service because it conflicts with his catering business, Chez Foushee does put on prefixed theme dinners a couple of times each year. Past hits have been an Arabian Night with belly dancers and an evening of Spanish food accompanied by Flamenco music. The next dinner, in February, will have a Hawaii 5-0 theme — sans Jack Lord. S