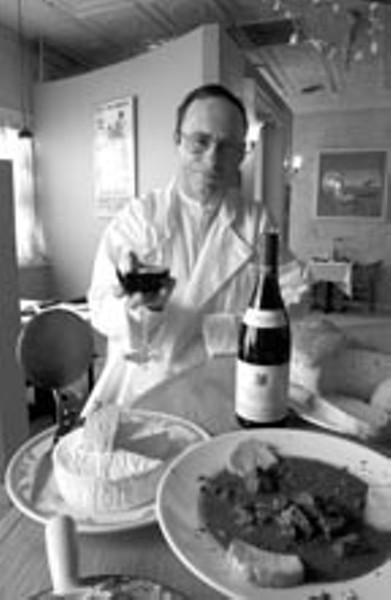 Giraudeau was born in Hanoi, moved to the Burgundy region of France and trained with prominent chef Alexandre Dumaine during school holidays. Though he maintained a lifetime interest in cuisine, Giraudeau's career path led him to French government legal work in Africa and, later, business ventures collecting and selling French art and antiques.

Now that he has come to the United States to help his daughter, the chef says he's indulging a hobby, creating world cuisine with a French emphasis.

The menu is a balance of classic French and northern Italian fare, reminiscent of the small family bistros that line cobblestone plazas from Monte Carlo to Nice. Nothing fancy here, just chicken and veal in preparations such as piccata and Marsala, French onion soup gratin, escargots, crab bisque, boeuf bourguignon, country pté with relishes, an outstanding trout meuniŠre and the occasional osso buco on special.

Those who doubt the authenticity of the Italian-French connection would do well to check their culinary history books. What we all consider classic French cuisine is the result of the world's first fusion movement. It seems that when Catherine de' Medici toured France after her arranged marriage in 1533, she was so disappointed with her new father-in-law's royal table that she immediately sent for her best Florentine chefs to train the lowly French cooks in the finer points of sauce and sauté.

The décor is inviting in a homey way, but one fault that Bella Arte has yet to address is the somewhat mismatched and inelegant minutiae. If you look, not too closely even, you'll notice that the flowers on the tables are plastic and nylon. Some of the booth's benches wobble a bit. The selection of art on the walls could be called eclectic, if you wanted to be generous. But the place is always adorned with the smiling faces of the regular clientele who know the staff by name.

All of this seems to indicate that there is a place for a middle-of-the-road French comfort-food joint in our diverse restaurant town. Which might lead you to remark to a friend on the way out for the night: "I'm not in the mood for anything fancy. How 'bout we check out that French place over on Bellevue?" — Joseph W. Cates and Deveron Timberlake