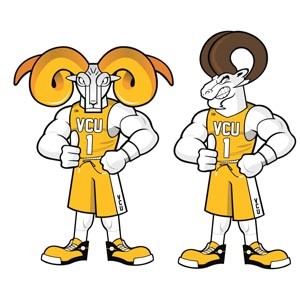 The mascots at Virginia Commonwealth University and the University of Richmond have been one-upped, by of all things, a squirrel.

Earlier this year the Richmond Flying Squirrels' celebrated icon, Nutzy, flew into town with bulging biceps and a menacing grin in the team's inaugural season, putting Rodney and Spidey on notice: You're too soft. With mascot hierarchy upended, VCU and UR are giving their emasculated pals a makeover.

By current standards both university mascots are antiques. Catch a video highlight of some of the recent mascot-on-mascot violence and you'll notice that gone are the days when mascots were overgrown plush toys. They're tougher, more athletic and ready to fight. Which might be why in new sketches Rodney the Ram's expressions are less a smiling ambassador of good wishes and more “I wish you would.”

Nutzy's designer, Jason Klein, co-owner of San Diego-based Plan B. Branding, says the mascot bulk-up started some after 9/11, when many people turned to sports for an escape. And fans wanted their mascots to drop the goofy grins and kick some tail.

The squirrel works because even as an anthropomorphic character he has a “fighting spirit — that never-say-die attitude that is so quintessentially American,” Klein says. “In times of stress, we want these hood ornaments to embody those values.”

Whether UR will follow suit with a tougher-looking version of Spidey is uncertain, but changes are in the works. University spokeswoman Linda Evans says administrators have had “preliminary discussions” during the last few months with the university's athletic department about adjusting Spidey's image. The university has hired a company to handle the redesign, but proposals won't be finished until later this year.

Mascot makeovers don't always go over well. UR alumni are still griping about a revamp about eight years ago, when Spidey's appendages were chopped. Upset that the new Spidey has only four legs — not eight — alumnus Brian Coleman created a Facebook page, “Give Spidey His Legs Back,” which now has 343 members.

Coleman says the movement is more about restoring a look that resembles an actual spider than toughening him up. Of course, it wouldn't hurt if the mascot kicks a little butt. “A Spidey with eight legs is a more intimidating Spidey,” Coleman writes via e-mail. “UR cannot powerfully instill arachnophobia in its competitors' psyches without an obviously identifiable arachnid.”