Indigo Girl Amy Ray is hard to keep up with — both on records and on tour. 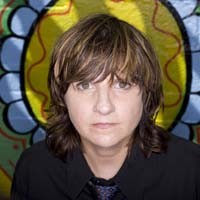 Catching up with rock stars is difficult. Throw in a handful of reschedules and the coup de grA›ce — a fall back to “regular time” — and you are bound to have trouble connecting with your interviewee. I'm assuming that all has gone to hell when my call from Amy Ray doesn't come in at the scheduled time. Five minutes into my distressed search for the publicist's number, my phone rings and I find an apologetic Indigo Girl on the other line. I'm warned up front that she's traveling through the middle of nowhere on her cell and she might lose me, but promises to call right back.

Founded in 1985, the Indigo Girls are synonymous with activist folk-rock and honey-drenched harmonies. Because they were both gay and sang together, somewhere along the way it was assumed that they must share the same bed. Not so. In fact, they are more individual than most would expect. Hits like “Galileo” and “Closer to Fine” represent most of their work that's written and arranged separately. With a handful of solo discs and the Georgia-based label Daemon Records to her credit, Amy Ray might be considered the more independent of the girls.

Having admitted once that she writes up to six hours each day, I ask the prolific Ray about her next album, which should surely be finished by now. … even if her latest just came out. With a laugh, she says, “I was actually writing an Indigos album when I wrote this one, which is coming out in March.” As for her own material, Ray admits that recently she's been writing country songs. “I don't know even know what that means,” she says. I suggest that maybe sometimes even the most passionate tree hugger needs a break. “Didn't It Feel Kinder” is far from twang, or anything Indigo fans might expect sonically.

Not surprisingly, Ray is consistent in her lyrical approach as she takes on a host of causes: gun violence and religious fundamentalism, among others. This go-round, the 44-year-old treads on varied ground, double-dipping in raucous indie-rock and American roots flavors, sprinkled with the occasional spot of soul and beautiful acoustics. There's even a pinch of new wave undulating on a few tracks. If it sounds a little all over the place, it is. But it's so good you want to stick with it to see where Ray goes next.

It would be unheard of to speak with Ray just days before a huge election without getting her take on the country's political climate. It leads us to an interesting conversation about this seemingly divided country wherein I got some surprising insight from the musician.

“One-on-one, people are good people. I think it would be harder if I were a person of color or had something besides just being gay against me,” Ray says. “I don't see it as divided. We had a lot of vehicle breakdowns at the beginning of this tour and had to count on the kindness of strangers to get things fixed. We have more in common than we have difference and somehow we always managed to get divided.” She also adds that she encourages her listeners to be patriotic, or as her Web site calls it, “punk-ass patriot,” which she defines as simply “engaging in your community, honoring all of its diversity and supporting it in whatever way it needs to be supported at the time. It's about loyalty.”

By the end of the interview, I've determined that Amy Ray's the cool girl in school who is subtly smart and insanely intriguing. I want to be her friend. I'm convinced I could pick this woman's brain all day about everything from renewable energy to the subversive literature of frontierswomen, but assuming she's got another interview lined up I keep it under 10 minutes. Maybe she'll let me buy her a beer at Capital Ale? S