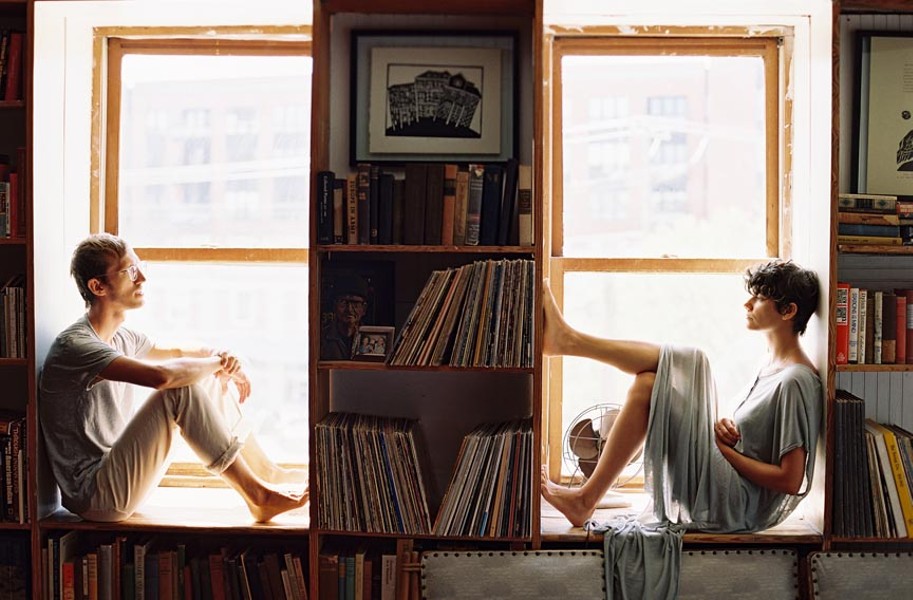 Eric Kelley Daniel and Lauren Goans of the Charlottesville folk duo Lowland Hum will be performing songs from their new album, “Thin,” at the University of Richmond’s Modlin Center.

Recording and touring have been Daniel and Lauren Goans’ life since starting their marriage and recording career simultaneously in 2012.

But last spring, the two behind the Charlottesville indie folk darling, Lowland Hum, found themselves with some much-needed downtime, a chance to catch their breath, assess where they’d been and consider the future.

The result is “Thin,” an album of impressive depth and emotional resonance, as the two artists seek to recharge while refining their vision.

“I’ve been writing songs since I was 12,” Daniel Goans says by phone from his home in Charlottesville, eager to talk about the new record, their third full-length, coming out Feb. 10.

Blending career with personal lives, collaborating on songwriting and performing, could spell trouble for many marriages. But the Goans embrace these layers.

“It is a challenge,” Lauren Goans says, “but I don’t really know how to live any other way.”

“Thin” features some of the best songwriting of their career. The arrangements are carefully realized and mirror the strengths of a union that brings out the best of both partners. In the beginning, Lauren sang and arranged vocals on songs written by her husband. With the release of “Thin,” the collaboration has deepened, and she contributes equally on every level.

Lauren is a visual artist, and brings those sensibilities to bear on the Lowland Hum experience. Incorporating her skills in video production, and accenting the live presentation through meaningful props and other visual media, she draws the audience in, creating a dialogue with the listener. The artist’s eye for detail seeps its way into the arrangement of both the vocals and the instrumentation.

The song paints a picture of the emptiness that road-weary fatigue brings. Together the couple seeks reconnection, leaning on the relationship, rather than pulling apart. Observing nature, the two sing, “I want to move that way with you, love is patient and kind.”

The Goans produced “Thin,” as they have with their previous releases. Last spring, they moved their gear into a friend’s attic in Charlottesville and began recording. The album benefits from the cloistered environment, creating a sense of focus that expands the material.

Among the songs on “Thin,” the couple mentions faith. Never preachy, their spiritual underpinnings provide strength and healing to road weariness and the demands of career. It also supplies the two with a wealth of compassion when singing about the trials they see around them.

On “Family Tree,” they examine the pain involved in a friend’s decision to give a child up for adoption: “Should I stick around to watch you from the window? You are safe and warm. I’ll only confuse you.”

On the songs “Folded Flowers” and “Someone to Change My Mind,” that faith causes them to question their perception of themselves and others.

“I think it frames how you see yourself and the world. I am sensitive to that,” Daniel says — “particularly when I am talking to someone who has been hurt by the church.”

The son of a minister, Daniel seems at ease moving between the church and the world, his work building bridges between the faith community and secular arts circles.

The music of “Thin” is quiet and beautiful, the arrangements intentional, serving to properly present the themes of reconnection, the bonds of marriage and friendship. Coming off the road last year, the two were in need of solitude.

“We crashed for a while,” Lauren says.

Daniel adds, “I think we crushed a few series on Netflix.”

But they have plenty ahead. Their booking agent, who also works with Josh Ritter, asked if they would like to open for him on a string of dates. They were thrilled, they say.

“The shows went so well he asked us to do a few more,” Daniel says. And their Richmond performance coincides with the album release.

With “Thin,” what they give listeners is a map to help reclaim sanity in a world that never stops moving or talking. In lesser hands these themes would drift into the myopic, a sort of musical selfie. But the Goans are wise enough to know the difference between reflection and navel-gazing. The result is a song cycle that is ultimately affirming. S