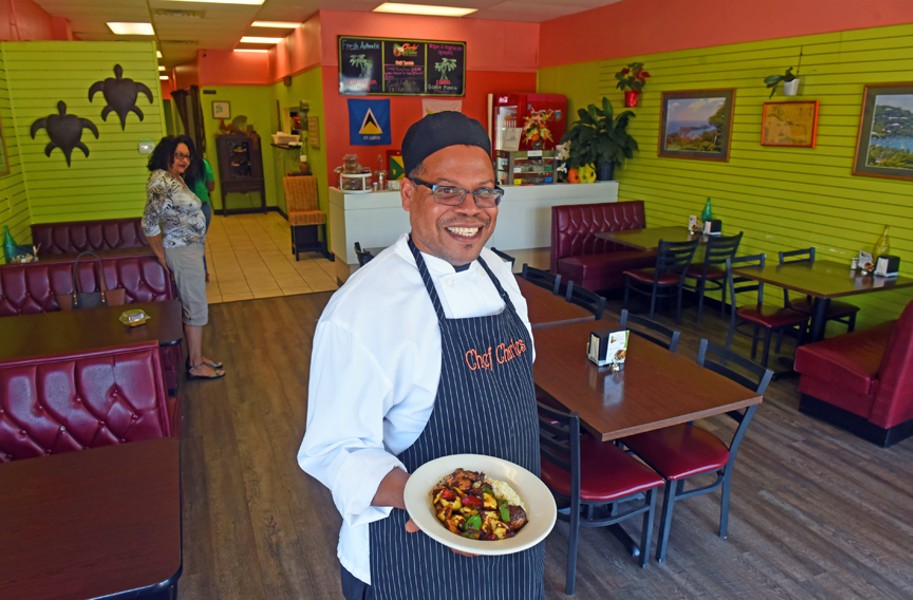 Far be it from me to cast aspersions on Richmond's stellar dining scene, but we've got a little problem.

Go to any great food city and you'll find restaurants featuring an array of global cuisines — Laotian, Philippine or Peruvian for instance — mixed in with the marquee places hogging all the press. Look for the same in Richmond and you'll find they're mostly relegated to the suburbs, away from the roving dining masses and off most people's radar.

Despite being a town that prides itself on its independent restaurants, few of us are inclined to think about strip malls when looking for winning places to eat. But when your taste for culinary adventure exceeds the size of your wallet, those little places tucked between discount clothing stores and smoothie cafes can be godsends.

As a devoted city dweller with a preference for spending my tax dollars in the city rather than the counties, I'll be the first to admit that I only heard of Charles' Kitchen through friends. The sunny space evokes the islands with chartreuse walls and accents of tangerine that seem to attract the natural light. A couple of metal tortoise sculptures climb up one wall and large photographs of island and sea cover the walls, as if to remind us where we should be enjoying this food.

My first taste of Charles' Caribbean cuisine was curry shrimp ($16/13/10) and if I'd eaten nothing else as good since that Wednesday evening, I'd still be smacking my lips with the memory of it. Plump shrimp were cooked to perfection, while the curry notes announced themselves without overwhelming the curry-shy. The coconut rice underneath provided a subtle palette for the curry's vegetables and shrimp.

If you're lucky, chef Charles may stop by your table and share how he came to Caribbean cuisine honestly. The native Guyanese, who had grandparents from St. Lucia and learned to cook from his mother and grandmother, says his youthful memories revolve around food and cooking. Fresh fish aside, it's a cuisine that focuses on long-cooked dishes, making for near instant gratification after ordering.

And while you might not think of Caribbean as comfort food, I dare you to find as soul-satisfying a dish as the stewed chicken ($10/8/6), replete with tomatoes, celery, onions and, according to Charles, "many, many herbs, secret Caribbean herbs." The result is falling-off-the-bone chicken so deeply and subtly seasoned that you just know it's been cooking since before sunrise. Sure enough, he admits he arrives at the restaurant at 4 a.m. to get everything started and be ready to open by noon.

It's a mixture of dry rub herbs and spices that lend St. Lucian herb style chicken ($16/12/10) its delectable skin over slow-roasted meat. And if you're a fan of curried goat ($15/13/9) or want an easy entry for sampling it, take note that it's only available Thursdays through Saturdays but with its deeply flavorful meat, well worth the scheduling. Ditto oxtail ($15/13/9) with its earthy, beefy taste and characteristic bits of fat for flavor, especially satisfying for fans of gnawing bones for every last scrap of meat. Guilty as charged.

Both goat and oxtail make worthy substitutions for curried beef when it's unavailable, even for less adventurous eaters because the taste isn't that far from beef, especially in the context of these long-cooked dishes. Fair warning, though: over the course of three meals at Charles' Kitchen, there hasn't been one meal when they weren't out of something: soup, mango slaw or curried beef. That's just a hazard of a small operation, although one easily remedied with a second choice.

If you're looking for a hand-held meal, check out the incredibly filling Caribbean patties available in curried chicken, curried beef, salted fish ($6) and veggie ($5). Encased in a soft pastry, the patties display their hand-rolled origins with irregular fork tine markings around the edge of what looks like an empanada on steroids, filled with shredded meat, vegetables or both.

House-made drinks include pink guava punch ($3) and sorrel ($4), a purple sipper of hibiscus and ginger, both of which taste as tropical as you could hope to find sitting in Richmond's West End. Desserts ($4), also made in house, are simple pleasures like dense coconut bread pudding and mango-spice cake, a recipe Charles himself created.

Am I wrong to wish such well-executed and underrepresented cuisine were a little closer to downtown? S