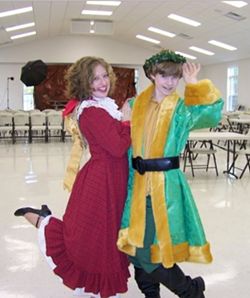 The online posting of a Christian youth drama company’s statement of faith has surprised many in the theater community, prompted a social-media firestorm and raised questions about the commitment to diversity and inclusion at the Steward School where the company’s shows are produced.

The company, CharacterWorks, known as CWorks, started in 2001 as an affiliate in the Christian Youth Theatre network, known as CYT, but split off as an independent organization in 2013. All network affiliates use language related to sharing “the love of Christ in word and deed” as part of their mission and values. CWorks goes further in its statement, however, detailing many specific beliefs, including: “we believe that marriage is exclusively the union of one man and one woman.” This assertion is in contradiction to current marriage law in Virginia and drew scores of angry reactions when posted on a local theater discussion page.

Donna Amadee, the managing director at CWorks, responded with a statement:

“Our Statement of Faith has existed in various forms since our inception in 2001,” the statement reads. “It was posted on our website ... at the beginning of the summer as we continued to update our new site. Nothing has changed regarding our mission, leadership, board vision and oversight, and business practices. Our programs are open to all families without regard to ethnicity, gender, sexual orientation or preference, learning style, talents, physical ability, political views, race, religion, socioeconomic status, or family structure.”

CWorks’ statement of faith may put the company at odds with the Steward School, a West End private school that lists inclusion in action as one of its values.

Rachel Williard, director of marketing and communications at Steward, issued a statement that says, in part, “We have a committee ... discussing the newly posted statement of faith by CharacterWorks, how it relates to our value statement, and determining any future steps between the two organizations in a timely manner.” It also specifies that the school has a contractual agreement to rent space to CWorks through the summer of 2019, a contract it intends to honor. For some, CWorks’s action codifies a long-recognized fact about the company.

“The recent statement of faith CharacterWorks ... posted does not surprise me in the least,” says Sean Dunavant who is a former featured performer for the company, starring in eight of its productions between 2005 and 2010. “The fact that the Richmond theatre community is just now learning of their bigoted belief system is shocking to me. CYT always had an anti-LGBTQ vibe and that is why so many students that were involved were afraid to come out, because they feared they would be ostracized from the community. I would know, I was one of them.”

Others have been dismayed by CWorks’ statement. “This statement of faith is heartbreaking to me," says Amy Gethins Sullivan. She was a scenic artist for CharacterWorks for nearly 10 years, but a busy schedule made her stop working for it earlier this year. She reiterates a sentiment expressed by many interviewed for this story who say the statement does not reflect the attitude of the people involved in the organization.

“I've grown to love all the awesome people who work there, parents who I have worked with volunteering untold hours for each production,” Sullivan says. “When a child grows up in a company like CWorks, it becomes their safe place, not just for the kids, but also for the parents trusting their children in that space.”

“That statement has no place in a children's theater program or anywhere, period,” she concludes.

CWorks’ next production will be “Newsies,” opening Nov. 16, a musical developed by a creative team dominated by gay men. Harvey Fierstein wrote the book and Jack Feldman, who married his partner of 23 years in 2015, wrote the lyrics.