Seven of Richmond’s most amazingly designed spaces and places.

Despite having to snake your way through an underground tunnel to reach the State Capitol rotunda, it's worth the trek. Standing on black and white marble tiles in Thomas Jefferson's cubical room (1788) — where presidents, prime ministers and even a queen of England has stood — you'll find your eye immediately drawn to the sublime statue of George Washington, by Frenchman Jean-Antoine Houdon. Busts of the seven other Virginia-born presidents surround Washington. Gaze upward to encompass the handsome, bracket-supported balcony and the dome, higher still, and you'll experience a near-perfect interior space. 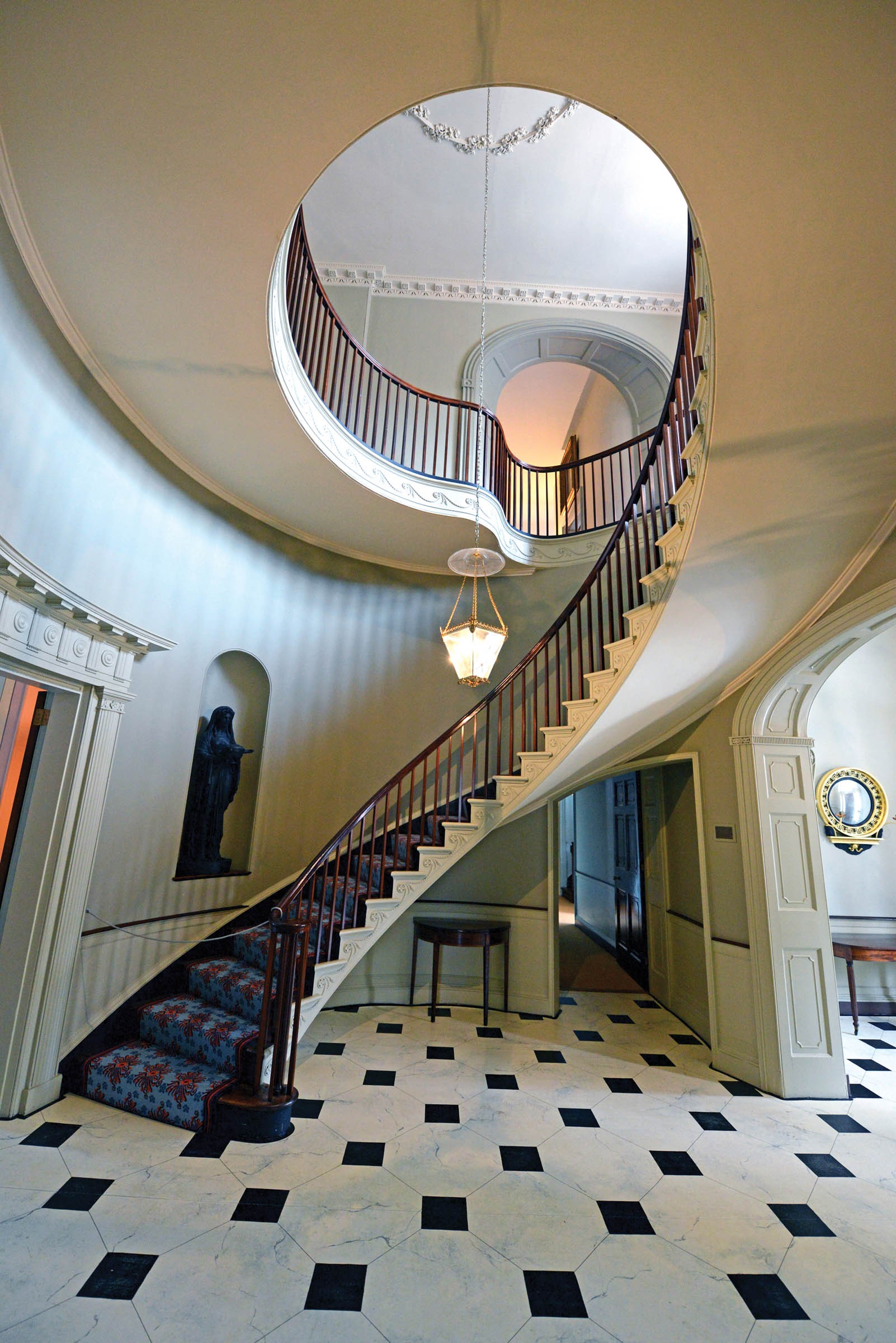 Another sublime architectural moment occurs nearby on East Clay Street within the confines of another landmark, the John Wickham House at the Valentine Richmond History Center. The palette-shaped, cantilevered front hall staircase is a masterwork designed by New England architect Alexander Parris in 1812. This sweeping object of uncanny gracefulness is the highlight of a dwelling that possesses exquisite dignity inside and out.

Hollywood Cemetery is picturesque by any measure. But a tombstone is a tombstone, and a crypt is a crypt, right? Not so fast. What do we make of the startlingly dramatic, cast-iron confection that marks the grave of James Monroe, our nation's fifth president? Designed by Richmond architect Albert Lybrock and cast by Wood and Perot of Philadelphia in 1858, the Gothic reliquary — usually a container for the remains of a saint — successfully blends historicism and downright surprise.

Richmond has two magnificent high-rise buildings in the art deco idiom on Broad Street: West Hospital at the VCU Medical Center and Central National Bank at 219 E. Broad St. But the latter never fails to delight because of how it rises in relative isolation from a nest of late-19th- and early-20th-century commercial structures at its base. Designed by architect John Eberson in 1929, the lavishly detailed, vaulted banking hall is hands-down breathtaking. And hooray! The complex is undergoing a major conversion to apartments, which will polish this jewel and give it renewed energy.

Design excellence often isn't showy. Indeed, hundreds of passersby move around the General Assembly Building at Ninth and Broad streets daily, probably without noticing the understated perfection of this midcentury-modern office building. It was built in 1965, and designed by Marcellus Wright and Partners, for the Life Insurance Company of Virginia as an addition to an existing, stolid classical structure. The wing has varying heights that match up with the irregular floors of the original building, throwing things off indiscernibly but to be especially pleasing to the eye. And by employing only two principal materials — plate glass and pre-cast stone — the building maintains a freshness despite approaching the 50-year mark.

It's presumptive to compare this Richmond precipice to Rome's Capitoline Hill or the Acropolis, but noted American architect Philip Johnson certainly had those classical hilltops in mind when he designed the relatively diminutive WRVA radio station on this western knoll of Church Hill in 1968. Now housing the Childsavers organization, the "temple" lords over Shockoe Bottom and the downtown skyline beyond. When viewed from downtown, the modernistic, white and mica-inflected box with its distinctive, oversized windows sparkles in the sunshine. It is startlingly heroic, yet intimately enough scaled to blend with its historic residential neighborhood. 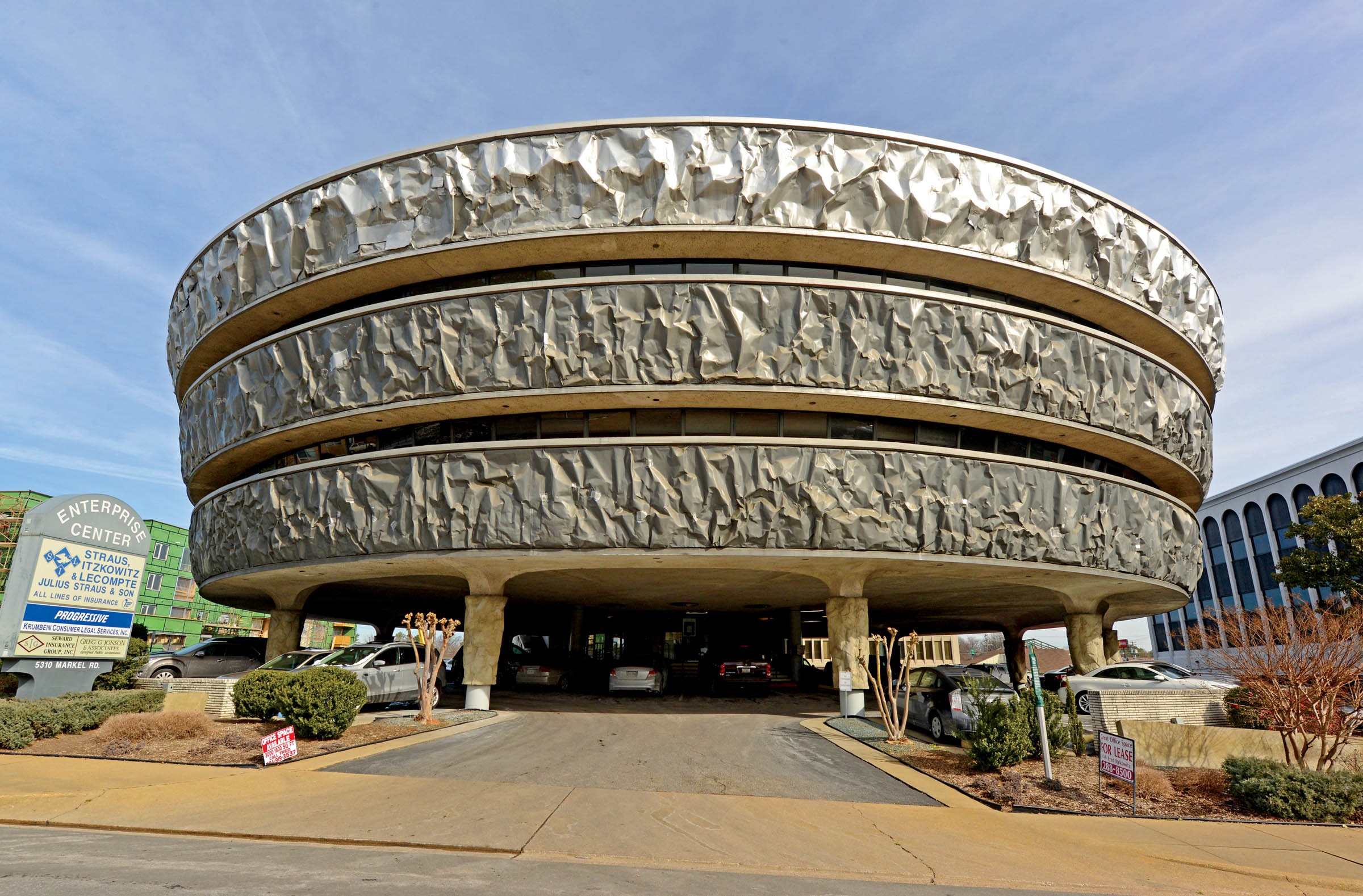 There are but two buildings by Frank Lloyd Wright in Virginia, but the great architect's influence is still widely felt here. Houses designed by a disciple, Frederick "Bud" Hyland, meld into the wooded hillsides of many Richmond suburban neighborhoods. But it was a Wright masterwork, New York City's Guggenheim Museum, which inspired Richmond architect Haig Jamgochian to build the Markel Building, an office structure near the Shops at Willow Lawn. To the unsuspecting, it appears as if the aluminum-crinkly, 1965 building landed from space. The idiosyncratic design is a refreshing break from the otherwise numbing and relentless commercial structures in the area.