Changing of the Guard

The third police chief in a month, Gerald Smith, meets the press. 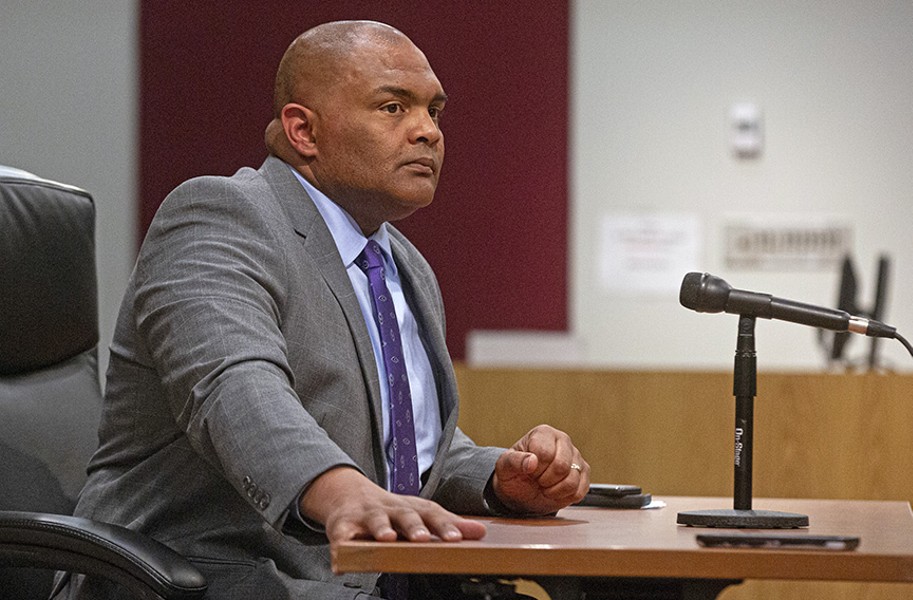 When Gerald Smith, Richmond’s new police chief, was growing up in Charlotte, North Carolina, his parents had a discussion of “whether we should lock the front door,” he says.

That small-town atmosphere has since changed dramatically as Smith rose steadily for 22 years through the ranks of the Charlotte-Mecklenburg Police Department to become a deputy chief.

On June 26, in a surprise move, Richmond Mayor Levar Stoney announced that Smith, 51, would become head of the city’s police. That made him the third chief in a month in a department that has been racked by turmoil and accusations of using excessive force to control demonstrations against the city’s Confederate monuments.

Stoney describes Smith as an “innovator” and “a reform-minded change agent” who would help the city turn public safety around.

“Richmond is a very good department,” Smith told the media during a news conference on July 13. But in his initial “walk arounds” he’s noticed that morale “is very low.” He added: “It’s hard to be a cop but it’s still a great profession. Look across the country. Officers have been vilified.”

Although short on details, Smith rebuffed calls that police be defunded as demanded by some demonstrators after the death of George Floyd at the hands of Minneapolis police sparked national riots. “Will a department do well with less funding? No, it cannot. … The question is not defund the police, it’s fund the change.”

Since late May, Richmond has been hit with nearly nightly demonstrations that target the city’s trove of Confederate memorials notably along posh Monument Avenue. A nearby statue of Christopher Columbus was taken down and tossed into a lake.

Police have responded with tear gas, pepper spray, rubber bullets and flash-bang grenades. Medical professionals have said that using chemical irritants is a bad idea during the time of the coronavirus pandemic. One officer was accused of driving a police vehicle through a crowd of protestors, sparking accusations and lawsuits.

Property owners have likewise sued, claiming that Stoney exceeded his authority in removing statues and that police refused to protect them when their buildings were vandalized.

In one lawsuit, former coal baron E. Morgan Massey, 93, and neighborhood conservation activist Helen Marie Taylor, 96, allege that the city has failed to protect them and their Monument Avenue properties. According to the lawsuit, Taylor was told by police that “they were instructed not to go where they perceived a threat to their safety.” Other lawsuits have claimed that the protests and loss of statues has hurt property values.

Smith said that he backs the use of crowd-control methods such as tear gas and pepper spray “if used properly.” He says that police “are there to facilitate First Amendment rights. We are there to help people who are really protesting.”

Charlotte underwent protests in 2016 after a slaying in which a police officer was involved. State and local police along with the Federal Bureau of Investigation investigated and determined that the shooting was justified. Potentially violent protests were contained.

Smith said that he became interested in police work in 1991 when his cousin pointed out that he could get education funding if he joined the department. He did and graduated from Pfeiffer University in Misenheimer, North Carolina, with a degree in criminal justice in 2004. He later earned a master’s degree in public administration from Clemson University.

During his Charlotte career, Smith worked as a patrol officer with a special emphasis on community work. He’s also been a fraud detective, a recruiter, traffic and drunken-driving enforcer and supervisor of homicide investigations and special events.

One of his mentors was Police Chief Rodney Monroe, who went to Charlotte after serving as Richmond’s top officer.

During Monroe’s 40-month tenure in Richmond, violent crime dropped off and homicides went down by a record 33%. In Charlotte, Monroe “really upset the apple cart” and “pushed us out of our comfort zones,” Smith recalled. “I kind of want to do the same thing here.”

Monroe was a major advocate of community policing, in which officers try to build good relationships with residents so they can help stem crime. Smith said the concept “worked great,” but the Great Recession in 2008 and 2009 and its problems helped curtail it.

Smith said he has heard complaints in primarily minority neighborhoods that people of color are often stopped for traffic checks and can be questioned by police for simply sitting outside of their apartments. Saying that officers need to communicate well, he notes that he wants to emphasize community policing here.

One problem is that he has sensed there is no philosophy at the moment regarding what kind of policing should evolve. One must be developed.

A flurry of efforts is underway to do just that. There are calls for resident oversight boards to be formed. One group, the Richmond Transparency and Accountability Project, wants an independent review board to be created. It also suggests that more funds be allocated to support mental health treatment.

Stoney has appointed members of a Task Force to Reimagine Public Safety, which will issue its recommendations later this summer. Smith likewise has called for external and internal police review boards to be established.

Without getting into specifics, Smith says that he backs the idea that oversight groups should have subpoena power because it helps get to the heart of problems and can give a broader view of what happens. One issue is that people who make complaints may later fail to show up to tell their stories, he says. “Subpoena power goes both ways. It helps the officer, and it helps everyone get a bigger picture of what exactly took place,” he says.

Police are often called to perform roles other than strictly law enforcement. One issue involves police intervention during mental health crises. Local police drew strong criticism in 2018 when Marcus-David Peters, a high school teacher and honors graduate of Virginia Commonwealth University, had a mental health episode and walked while naked on Interstate 95. A police officer tried to subdue him with a stun gun and then shot him. Protestors have unofficially renamed the circle around the statue of Robert E. Lee on Monument Avenue for Peters.

Community policing could help with mental health, Smith says. Family members can call police if they believe a relative with mental illness is in danger. They may have stopped taking their medications and alerting police to the problem gives officers time to bring along a mental health counselor. Such individuals may react strongly if they see people in uniforms and counselors can help defuse situations.

Smith, who is married, has two grown daughters. He and his wife are renting an apartment and will likely buy a house next year.

Smith declined to answer media questions July 13 about how many officers have been disciplined for alleged misconduct during the six-week-long period of protests in Richmond. In one case, police deployed tear gas at a peaceful demonstration about a half an hour before a curfew took effect.

The protests, led by Black Lives Matter proponents, have been a major problem for the politically ambitious Stoney, who had also taken hits earlier for his support for the failed Navy Hill downtown redevelopment project led by Dominion Energy chief Thomas Farrell.

As the protests gathered steam, Stoney abruptly fired then Police Chief William Smith and replaced him with William “Jody” Blackwell, a Richmond police veteran and former Marine. Blackwell, who was said to be an interim chief, lasted for 11 days before he also was removed. He had drawn criticism for his involvement in the 2002 shooting of a man that was deemed to be justified.

In choosing Gerald Smith, Stoney bypassed plans for a national search. He apparently chose Smith based on the recommendations of former Richmond chiefs Monroe and Alfred Durham.

The most recent chief was asked directly if he had ever been involved in an officer-related shooting. He quickly said he had not and had never shot his weapon while on duty.