Changing Culture One Bike at a Time 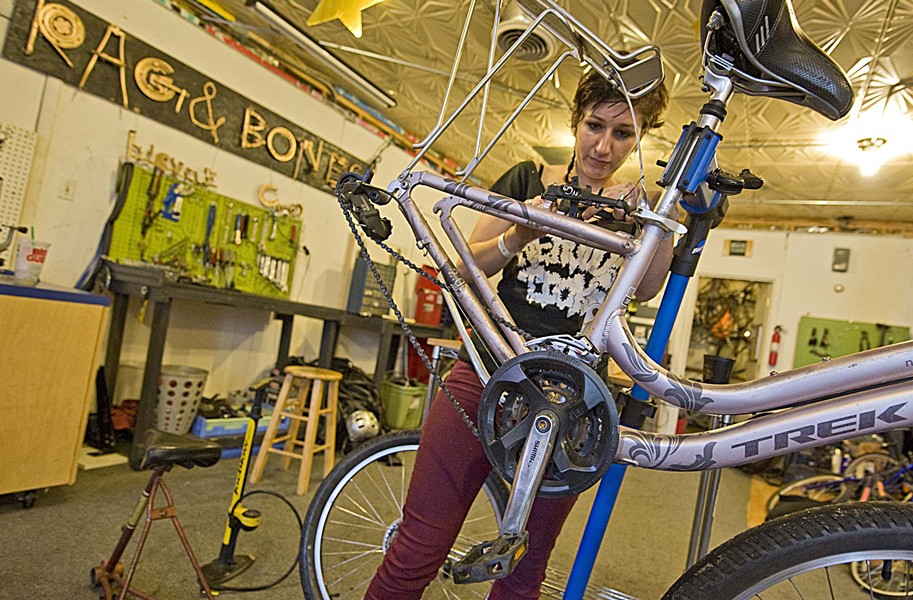 Step inside a small storefront tucked into the corner of Leigh Street and High Point Avenue, and it takes a minute to tell the staff from the customers. Everyone is working on bicycles — and that's the point.

The Rag & Bones Bicycle Co-op can best be described as a self-help repair shop. You can buy an inexpensive, well-made bike. Or if it's all you can afford, you can get a cheap, crappy bike. But co-op members will tell you it's a cheap, crappy bike and then teach you how to fix it.

"We try to be as hands-off on tools as much as possible," staff member Aaron Linas says. "We'd rather teach you what to do."

The co-op is run by volunteers who rely on donations and bike sales to keep the doors open.

"Essentially what we want to offer people is access and education," staff member Phillip Cunningham says.

Cunningham takes some of the leadership duties, but Rag & Bones is run as a collective — all six staff members have equal say in how it's run. The co-op's origins are a garage in Carytown that bike enthusiast Joe Bock opened in 2010.

"It was the same concept, he was just collecting junk," says Linas, who started working with Bock in the garage and helped launch the project.

Bock eventually moved to North Carolina to start a shop, and the collective gradually took over ownership here. The shop's run on little money and big ideas: sustainability, empowerment of the lower-income work force and the shifting of the culture away from cars.

"Our mass transit system is horrible, horrible," Linas says. "I know GRTC means well, but it's always been that way and some say it's gotten worse. … Really the co-op came about organically. We looked at how we could make money selling bikes and at how we could serve the people we need to serve. That's basically the working-class, lower-income person, students — really just your average person who needs to go to work, but the bus will take 45 minutes and a bike takes 20."

Considering that roughly a quarter of the city's population is below the poverty line, co-op member Stephen Loughman says, "most people don't have the means to own a car or a driver's license or possibly even afford bus fare."

Linas estimates Rag & Bones helps about 20 people a week and easily could open more often given the demand. But the staff holds down other jobs to pay their bills, and can devote only eight hours a week to the co-op, Cunningham says.

Oregon Hill resident Ellen Crawford, 24, is one of several customers who relies on a bike. After hers was stolen, she worked with Rag & Bones to build a new one. It took a month to choose various components and build her bike piece by piece.

"When I came here I didn't know all the parts of a bike. I would just say, 'Oh, it's that pointy thing,'" Crawford says. "I can actually probably build my own bike now with [the help of] a book."